This third blog in the Living with Brexit series looks at the deal from a business perspective, highlighting some of the potential advantages of the agreement for progressive businesses. 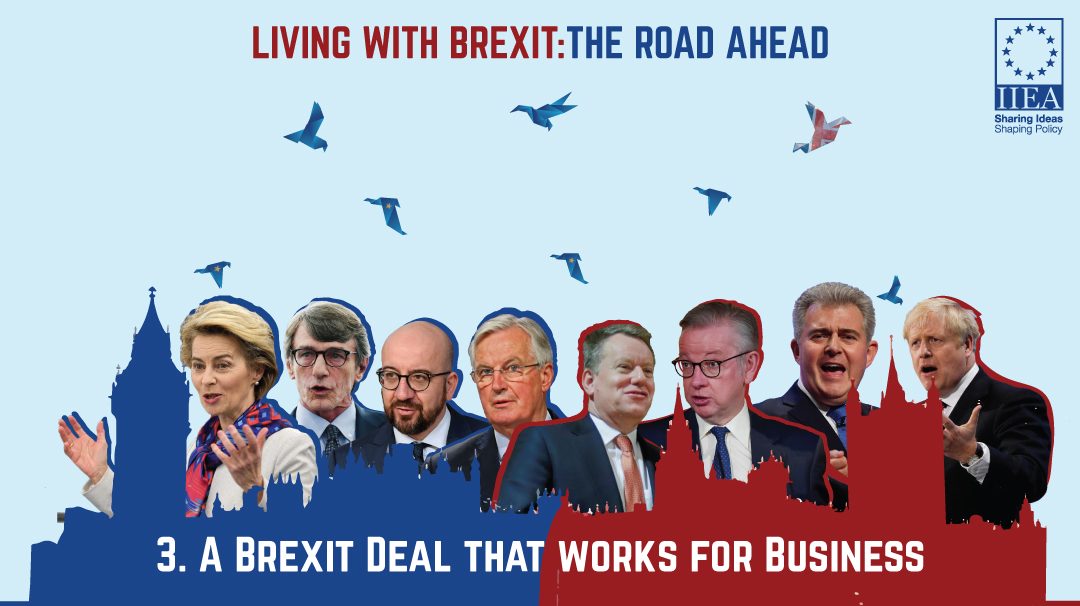 In the third blog in the series, John McGrane, Director General of the British-Irish Chamber of Commerce and member of the IIEA UK Group, writes that the myriad line-item uncertainties in the Deal will be pored over for months, perhaps years, both at firm and sector level and through the web of new joint committees that will effectively ensure that negotiation of the realities of UK-EU trade never really ends. But, he writes, business has enough to work with in this Deal to get on with business.

In overall terms, business breathes a sigh of relief to have a Trade Deal, however imperfect, as delivered by the EU-UK Trade and Cooperation Agreement published in just enough time to have avoided the far worse outcome of No Deal.

In fact, what has been negotiated for the conduct of business can be regarded as a relatively benign package which goes further than was expected, by effectively including (non-financial) Services and by enabling a Data Adequacy Ruling which avoids disruption of established business data transfers into the UK. The deal also affords a reasonable, if not full, level of predictability of the landscape for continued trade between Ireland and the United Kingdom of Great Britain and Northern Ireland, sufficient to sustain established business operations and to encourage, if not assure, continued further investment in growing that valuable trade.

Of course, reflecting its last-minute completion, the Deal brings with it extensive instances of established business practice that will remain to be fully clarified through feedback from real-world experience and through the resultant committee-based clarifications and fuller codification. More immediately, it also imposes specific new procedures, delays and costs on the conduct of long established “free” trade. But in overall terms, the avoidance of tariff costs and quota limits on trade (and most especially in relation to food trade) has delivered the primary objective of most businesses, for now.

Equally, of course, there are some notable exceptions to the chorus of welcomes. The fishing industries of all of the involved nations share a common disappointment and will see inevitable dis-investment and its adverse consequences for the hinterland economies of coastal communities.

Elsewhere, while fishing learned its fate very late in the negotiations, the financial services sector could foresee its outcomes from much earlier. It is no surprise, therefore, that the finally agreed Deal delivered nothing to enable free trade in financial services between the UK and the EU. As in other elements, vague allusions to further talks about collaborative relations leaves no illusions about the degree of final separation which is already being fully operationalised.

It is helpful to wider business that, modest exceptions such as Legal Services aside and short of delivering full Mutual Recognition of Professional Qualifications, the Deal gives a basis for relatively open trade in Services. Business depends on this at least as much as it needs fluid trade in goods because, in the modern economy, all trade in goods relies on unobstructed availability of the services on which those goods rely.  Such services range from quite separate disciplines such as marketing or engineering, through in-person services such as repairs and logistics to embodied services such as the technology and intellectual property that form an inseparable element of a piece of manufactured equipment. The Deal effectively maintains an environment in which the EU enables its Member States’ local professional regulatory institutes to govern services delivery locally and to form mutual agreements with their equivalent institutes in the UK. While this does not assure uniformity of approach, and so leaves business with the incremental costs of having to do some things differently in some countries, it is a better outcome than the outright rupture of traditional trade in wide swathes of financial services.

Most relieved will be the food sector, from farm to fork. WTO terms, applicable under a No Deal scenario, would have so financially penalised food exports from Ireland to the UK that end-customer households could not afford their traditional purchases in British supermarkets. The devastating effects would have not only been felt on Irish farms but right across the comprehensive web of their stakeholders in every constituency.

The food sector will instead, however, have other new costs and delays to the hitherto highly efficient logistics of its route to the key Great Britain market and beyond. Evidencing customs compliance between Ireland and Britain and delays and capacity constraints on freight journeys between Ireland and the continental European market are an immediate threat to competitiveness, not only for food trade but for all goods reliant on hitherto highly sophisticated logistics. Teething problems in application of new procedures will be overcome, and businesses and business models (and resources to ease compliance) will adapt, extensively if they must, but not overnight. Margin compression (perhaps supported by permitted interim state aid) will have to be borne immediately to hold hard-won market share.

The permanence of the Common Travel Area goes some way to soften adverse business impacts. Coupled with other agreed terms for in-person conduct of business in Britain by other Europeans and in Ireland by British citizens, ways will be found to maintain most business service relationships, noting that the EU single market for free trade in services was incomplete anyway. One of many important areas for both clarification and renewed joint endeavour is in higher education and research, key to longer term mutual wellbeing at home and abroad. The UK’s regrettable departure from the Erasmus scheme may hopefully yet be re-thought.

For now, business has got what it most needs, which is reasonable certainty about what business is permitted to do and the conditions with which it must comply. There is now enough forward visibility to support the much-needed resumption of business investment on which a jobs-led recovery will depend post-COVID-19.

Larger business will however factor a new element of political risk into major investment decisions. Much now depends on how UK political policy uses its permitted, if modest, bandwidth of variation from EU rules and how Britain uses its rights to deal with other third countries. While business anticipates a broadly non-divergent scenario (not least because of the Deal’s re-balancing provisions for effective dynamic alignment), there are risks dependent on whether Brexit leads, over time, to an economically stronger or weaker UK. If weaker, business will decline and inter-island trade, investment and jobs will suffer; food trade will be freshly exposed to what the UK may do to find cheaper sources to feed the nation. Less impactful variations in such as tech-industry regulation will bring a new phase of both competition and opportunity for entrepreneurial businesses. Strategic variations also in intra-nation taxation may become a freshly competitive consideration.

The UK’s new bandwidth for regulatory variation may also bring additional business costs (of complying differentially) but also non-trivial upstream political risk of a collapse of the Deal just agreed, as permitted. This risk raises immediate investment question-marks not only within the UK (and its regions) but, importantly, in the global market for mobile foreign direct investment. How this plays out matters now as our two islands re-boot relationships as both friends and competitors.

Clearly, the particular dispensation now for Northern Ireland will be assessed under all of these headings, not least by business, and there is a clear opportunity for a fresh impetus to business investment now if it can be embraced within the province.

Ultimately, it is an unnatural state of affairs for there be anything less than fully open trade between two islands so close and so similar in so many respects and with so much trade in common. For as long as this persists, there will be arbitraging of what will now be artificial differences which distort and waste value in natural local competencies. In the meantime, business now regards Brexit as done and it becomes just one of many broad factors that shape their investment outlook. More immediately serious concerns are understandably for successful management of the Covid 19 pandemic and soon business will be concerned afresh about increased taxation to address the financial costs of that crisis. Wider changes to international trade and business taxation also matter, as does the balancing of climate action goals with the needs of an agrarian economy and also the impact on business models in fundamentally changed sectors such as high street retailing, travel and hospitality.

Change unsettles business but, once it is absorbed, change is seen by progressive business as opportunity. The coming years will see progressive businesses adapt as they always do to opportunities in the locations which best assure them competitive advantage in terms of comparative costs, access to key skills and markets, a pro-business environment and low political risk.

How the trade done by business which delivers investment, jobs and community wellbeing will evolve in light of Brexit will be known soon enough. The real meaning of Brexit (rather than Brexit Means Brexit) will then finally be clear.