Con Lucey, former Chief Economist of the IFA, discusses the implications of the UK-EU Trade and Cooperation Agreement on agriculture and food production. 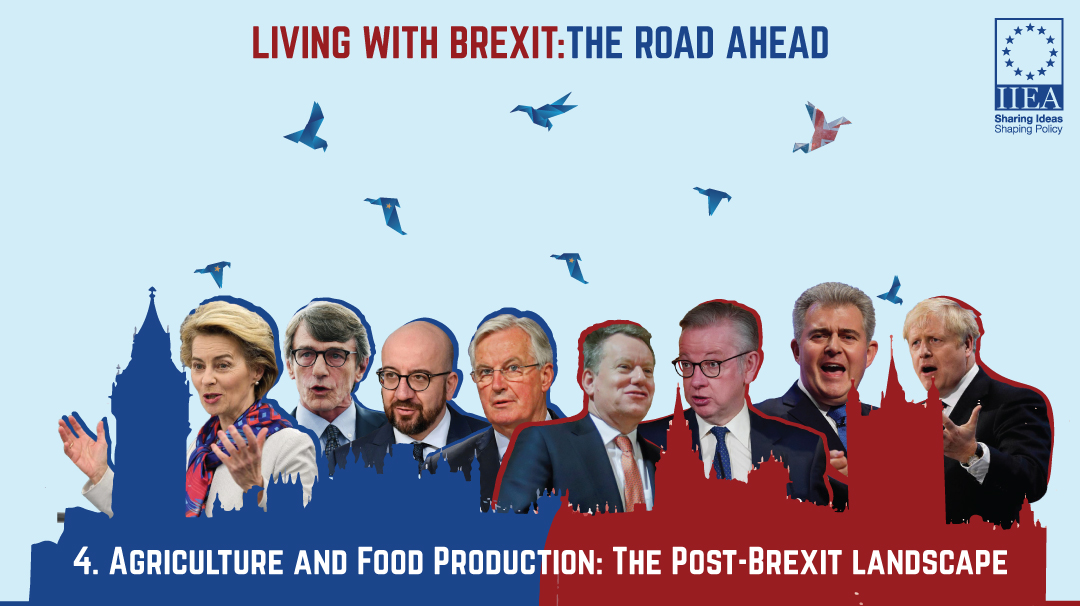 In this fourth blog in the series, Con Lucey, member of the IIEA UK Group and former Chief Economist of the Irish Farmers’ Association (IFA), discusses the implications of the UK-EU Trade and Cooperation Agreement on agriculture and food production. He finds that Ireland’s agri-food industry is likely to review its current reliance on the UK market and seek opportunities in the EU and elsewhere. The author notes that at farm level in Ireland the impact of Brexit, even with the free-trade agreement, is likely to be greatest for the beef sector.

Ireland’s agriculture and food production sector would have been extremely exposed and vulnerable if the UK and the EU had failed to reach a free trade agreement. Our agri-food sector continues to be highly reliant on the UK market. While the UK accounts for only 11% of Ireland’s total exports of goods, it accounts for 38% of our agri-food exports. Also, import tariffs under new UK tariff regime, which broadly mirrors EU common tariffs, are very high for agri-food products. Irish Government estimates that our beef exports and dairy product exports to the UK would be facing tariffs of 72% and 40% respectively without a free trade deal. Thus the UK-EU “zero-tariff zero quota” trade deal avoids the worst implications of Brexit for Ireland’s agri-food industry.

As a consequence of the Ireland-Northern Ireland Protocol no customs or regulatory charges or controls will apply on trade between Ireland and Northern Ireland. The following analysis is focussed on the Great Britain (GB) market and on Ireland-GB trade.

Even with a trade agreement in place, Brexit means that Ireland’s agriculture and food industry faces additional costs and disruption in reaching the Great Britain market. Brexit also means that the transit of Irish goods to the EU market through GB, known as the landbridge, will be slower and less reliable. And Brexit may change consumer demand for food in the GB market.

Overview of the UK market for Irish exports

Ireland’s agri-food exports to the UK are valued at €5.5bn, of which €4.6bn go to GB. The three main export sectors are beef, dairy products and a wide range of products grouped as “prepared consumer foods. About 50% of Ireland’s beef exports (270,000t) go to the UK, valued at €994m. Ireland’s exports of dairy products to the UK are worth about €960m, including 78,000t of cheddar cheese, 45,000t of other cheese and 41,000t of butter. The UK accounts for 68 % of our exports of prepared consumer foods, valued at close to €1.8bn. Also, the UK accounts for 33% of our pigmeat exports, 60% of our poultrymeat exports, and almost all of our mushroom exports.

From January 2021 the EU Customs Union and Single Market no longer apply in GB. UK customs authorities will apply customs controls on imports of goods from the EU, and customs authorities in the EU will apply controls on imports from GB. Also, of particular relevance to the agri-food sector, the UK and the EU will have separate regulatory systems in relation to food safety, human health and animal and plant health. Border checks and controls between the EU and GB will also be concerned with “rules of origin” which define the maximum amount of a good that comes from outside the UK-EU free-trade area and still qualify under the agreement. These checks and controls will involve new costs and delays on exports of agri-food products from Ireland to GB; estimates point to these non-tariff barriers being equivalent to a 6% – 10% tariff.

UK Landbridge and Alternative Trade Routes to the Continent

The UK landbridge has provided the quickest route from Ireland to Continental Europe and is important for exports of time-sensitive products including agri-food. From January, customs and regulatory controls, and COVID-related requirements, will result in traffic disruption in South-East England to a degree which will remove the landbridge advantage, at least in the short-term. Thus, direct sea routes to the Continent are vital, as they can provide the necessary certainty, but the journey time is longer than the past landbridge alternative.

Significant preparations have been made by the Irish government, the port authorities and the ferry companies. A daily service from Dublin / Rosslare to Cherbourg is being provided by existing ferry operators. A further ferry operator has entered the market, providing a service from Rosslare to Dunkirk, which is closer to our main European food markets. Overall however, the uncertainty of the landbridge is a further cost to food exporters to the EU market.

An important consequence of Brexit is that the UK government is fundamentally changing its food policy. This involves changes in support systems for UK producers and the negotiation of new trade agreements with the US and other countries. A clear ambition of the US is to increase its agri-food exports to the UK and the issue of food standards will be central in any such negotiations. Imports of food at lower standards would undermine the value of the UK market to current EU suppliers.

The pre-Brexit situation is that the UK is only 60% self-sufficient in food, and about 70% of its food imports come from the EU27. Some weakness in demand for food products can be anticipated in the UK market post Brexit for a number of reasons. Customs and regulatory costs may increase retail prices. The pandemic has resulted in an 11% decline in the UK economy in 2020. Also, some supermarket groups have signalled their intention to sell only British food products.

Ireland’s agri-food exporters that currently supply the UK market are likely to seek to retain their UK market share, at least in the immediate future. However, many of our exporters face UK purchasers with huge market power who will resist price increases. Future UK government strategy on trade agreements with third countries is a cause of further uncertainty. Thus, Ireland’s agri-food industry is likely to review its current reliance on the UK market and seek opportunities in the EU market and in third country markets, while recognising that market diversification is a gradual process. At farm level in Ireland the impact of Brexit, even with the free-trade agreement, is likely to be greatest for the beef sector, where dependence on the UK market is high, farm incomes are low, and beef cattle farms are mainly located in the Western and other poorer land areas with limited alternatives.