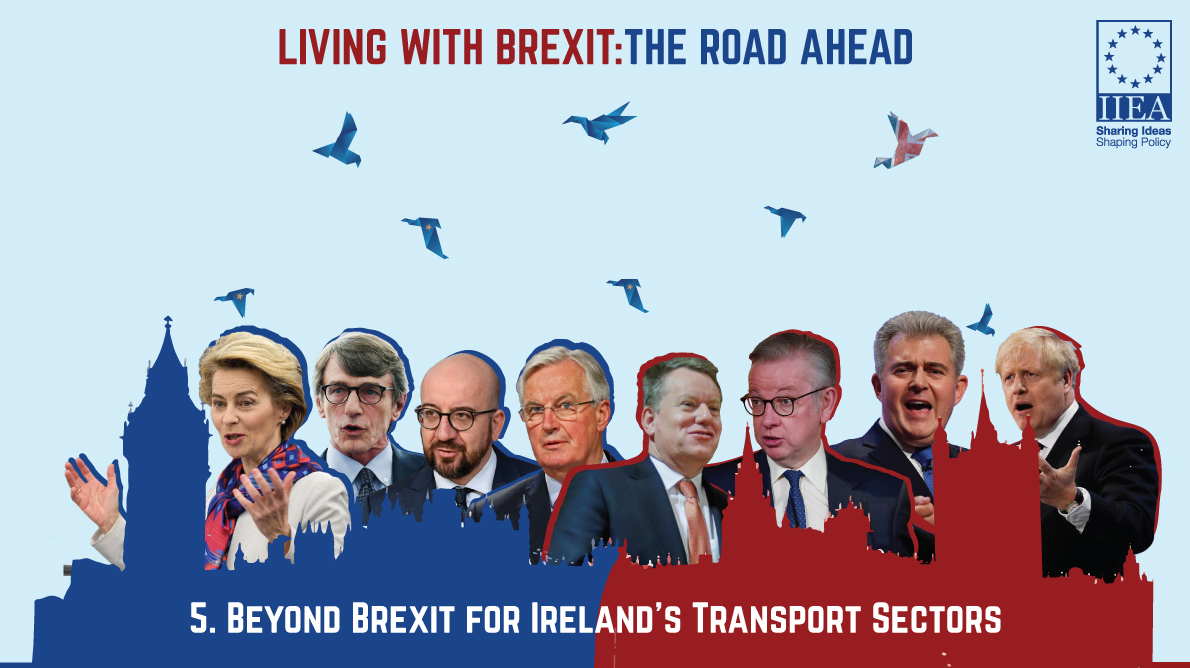 The fifth entry in the series, by Tom Ferris, Former Senior Economist at the Department of Transport, examines what the EU-UK Trade and Cooperation Agreement means for Ireland’s transport sectors; specifically road freight transport and aviation.

To preserve their mutually beneficial trading relationship, the EU and the UK have created a free trade area with no tariffs or quotas on products, regulatory and customs cooperation mechanisms, as well as provisions designed to ensure a level playing field for open and fair competition, as part of a larger economic partnership. While it may be a free trade area, it does involve traders processing a considerable amount of documentation. In particular:

The EU and the UK now have two separate regulatory and legal systems. This means that all products exported from the EU to the UK will have to comply with UK technical regulations and will be subject to any applicable regulatory compliance checks and controls. Similarly, all products imported from the UK to the EU will need to comply with EU technical regulations and will be subject to all applicable regulatory compliance obligations too.

Under the EU-UK Trade and Cooperation Agreement (TCA), all transport businesses conducting operations between the EU and the UK have now to ensure compliance with EU and UK certification requirements respectively. In particular, transport operators are affected by changes in the formalities

required when crossing the UK-EU borders, including Irish traffic using the ‘landbridge’ across Great Britain.  These ‘landbridge’ provisions will allow the continuation of logistics links between Ireland and the rest of the EU via the UK, unless they decide to use direct routes to the rest of the EU by sea or air. The IIEA briefing on Implications of Brexit for Ireland’s Key Transport Sectors, published in October 2017, discusses the ‘landbridge’ in greater detail.

With the implementation of the Treaty, UK companies are no longer free to hold an EU licence and are restricted in their provision of transpo

rt services within the Union. However, the two sides have agreed in the Treaty to recognise each other’s ‘Authorised Economic Operators’ programmes, enabling trusted traders that already benefit from this status to enjoy certain simplifications and/or facilitations relating to security and safety in their customs operations with the customs authorities of the other Party. But it is the truck drivers who have to do the ‘paperwork’, at the ports, mostly on their smart phones or tablets. To give a flavour of the ‘paperwork’, the Box A below summarises what the Irish Customs Authorities require from hauliers and freight forwarders for freight movements to and from Great Britain. Obviously, somewhat similar ‘paperwork’ is also required by the UK authorities for freight movements to and from Ireland – see the HMRC website for the latest information regarding the import and export requirements of the UK. 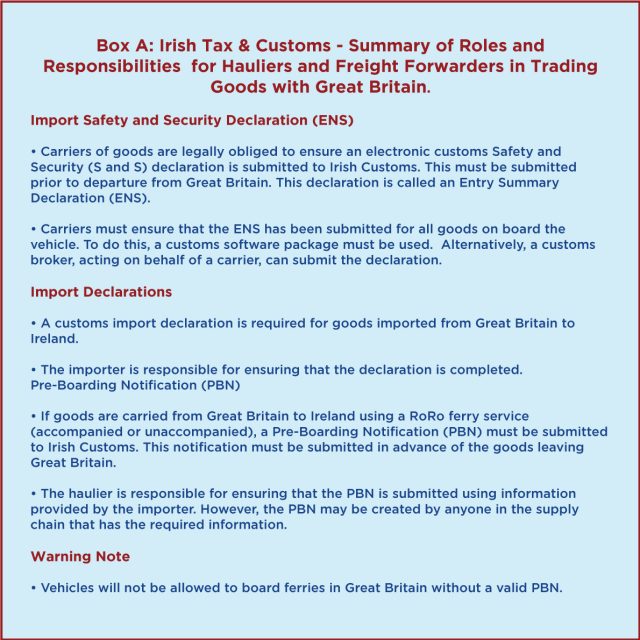 The TCA has brought Sanitary and phytosanitary (SPS) rules into sharp focus since 1 January 2021. These rules are designed for the protection of human and animal health (“sanitary”) and plant health (“phytosanitary”). Specifically, EU law includes detailed SPS rules to ensure high levels of food safety, and to reduce or eliminate possible health threats to EU citizens, as well as to animals and plants in the EU. UK agri-food exporters now have to meet all EU SPS import requirements and be subject to official controls carried out by Member States’ authorities at Border Control Posts. Where required, these controls include the verification of health certificates in line with international standards. Similarly, EU agri-food exporters have to meet all UK SPS import requirements.

The TCA does set-out the ground for developing further customs cooperation in the future, including consideration of innovative solutions in respect of both Parties’ domestic rules, concerning the handling of customs procedures for roll-on/roll-off (“ro-ro”) traffic, i.e. ships carrying loaded trucks, or exchange of customs-related information.

Under the Treaty, UK airlines can no longer enjoy the same level of traffic rights across EU airspace. However, the Treaty does provide new terms and conditions for market access, as well as arrangements for cooperation in the areas of aviation safety, security and air traffic management.

Under the TCA, UK carriers are free to fly across the territory of the EU without landing; make technical stops in the territory of the EU for non-traffic purposes; and carry passengers and/or cargo on any routes between a given point in the UK and a point in the EU. However, UK carriers are no longer free to transport passengers or cargo between two points in the EU, nor perform onwards carriage services between the UK and two other Member States (e.g. Manchester-Munich-Warsaw). Nor will they be allowed to carry passengers onwards between the UK, a Member State and a third country (e.g. London-Amsterdam-Bangkok). Nevertheless the Treaty does allow Member States and the United Kingdom to bilaterally exchange freedom rights for extra-EU all-cargo operations only (e.g. Paris-London-New York).

Other provisions that apply to the aviation sector can be grouped into specific provisions and general provisions. Box B summarises some of these provisions.

Now that Brexit has happened, the United Kingdom has lost the rights and obligations it had as an EU Member State. It no longer benefits from seamless access to the EU Single Market and Customs Union, or from EU policies and international agreements. All these changes have created new barriers, whether to trade in goods and services, or to cross-border mobility and exchanges. While the new Treaty limits the extreme disruptions that had been forecast, compared to a ‘No-deal’, many people and organisations, in the EU and in the UK, are now being affected, particularly the road freight transport and aviation sectors that are addressed here.

For its part, the European Commission has proposed a new stream of funding, named the Brexit Adjustment, to counter unforeseen and adverse consequences of Brexit in Member States and in sectors that are worst affected. The Minister for Finance, Paschal Donohoe TD, announced on 13 January 2021 that the initial allocation proposed for Ireland is more than €1 billion in current prices. This is almost a quarter of the initial allocation of €4.2 billion that will be made from the Reserve in 2021. Further funding of €1.1 billion in current prices will be made available to the EU-27 in 2024.

To conclude, Ireland’s transport sector faces many challenges now that Brexit has happened. Teething problems are indeed evident, particularly operational impacts on supply chains at Ireland’s ports. As An Taoiseach Micheál Martin pointed out, in an address to the IIEA on 15 January, 2021:

There is no avoiding the truth, however, that as much as we have worked to mitigate its impact, Brexit requires us to manage very damaging developments. These include considerable change and greater complexity, especially for anyone seeking to do business with Great Britain into the future.