Paul Gillespie discusses the future of the UK itself after Brexit, as well as the potential spillover effects for Ireland. 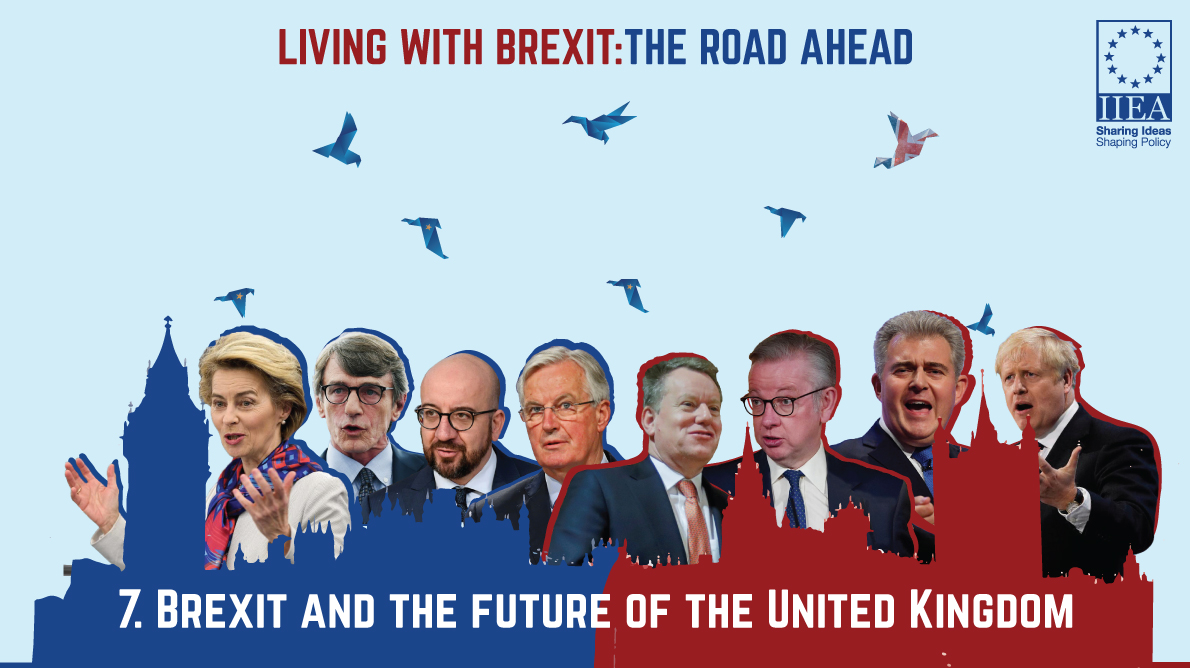 In the seventh blog in the series, Paul Gillespie, member of the IIEA UK Group and director of the Constitutional Futures after Brexit project at the Institute for British-Irish Studies in UCD, discusses the future of the UK itself after Brexit, as well as the potential spillover effects for Ireland.

That the future of the United Kingdom’s own political union is moving to the top of its political agenda after its departure from the European Union shows how intimately connected external and internal aspects of sovereignty are now in a world of deepening interdependence.  A hard Brexit, although it is better than a no deal, drives this change, as does the concomitant recentralisation it brings of UK policy-making in London, and away from the devolved authorities. The UK’s dual sovereignty crisis in these two dimensions has profound consequences for Northern Ireland as a part of its polity and for the Republic of Ireland as its leaders and citizens ask whether, how and when that might result in debates and decisions on a united Ireland sooner than they want or expect.

Resentment that the Brexit decision was taken despite Scotland’s 62-38% vote to stay in the EU drives much of the Scottish National Party’s campaign for independence from the UK ahead of the Scottish Parliament elections in May. Political and media commentary links the potential Scottish spillover effects to unification referendums in Ireland and the UK’s overall future. Recent opinion polling shows support for Welsh independence at an unprecedentedly high level. More significantly, because England has 85% of the UK population, surveys showing falling levels of British identification and growing regional inequalities raise the question of whether the will exists there to sustain the UK’s union. We were reminded that unions can fall apart as much from the centre as the peripheries by George Osborne’s recent article in the Evening Standard which said few in England would care if Northern Ireland left the UK.

Such growing shifts in political identification within the UK have been accelerated by this harder Brexit. Repatriation of policy-making from Brussels reinforces these trends. Devolution of power to Scotland and Wales, alongside power-sharing in Northern Ireland, took place within the framework of UK and Irish EU membership. Powers and policies reserved to Whitehall and Westminster (like foreign affairs or macroeconomics) or devolved to the three authorities (like education or health) took it for granted that others (such as trade and agriculture) had been ceded to Brussels.

The hard Brexit rudely disrupts these arrangements because it returns powers and policies to London, necessitating decisions and renegotiations with the devolved authorities on where they should end up. The resulting UK Internal Market Bill became in 2020 a matter of recurrent tension between them over the precise siting of competences, consultation mechanisms and executive passage of details. In each case existing disagreements were exacerbated, giving ample opportunity for Scottish nationalists to assert that independence in the EU would better suit Scotland.  The Welsh Labour executive demanded much more regular institutionalised relations with London, while Plaid Cymru saw support for an independent Wales triple to 33% in recent polls.

These two driving forces of potential UK fragmentation or even breakup, a hard Brexit and the recentralisation of governing powers in London, have created several major counter-movements in unionism. Their confluence amounts to a political crisis for the UK’s union which former prime minister Gordon Brown describes as the most serious since it was formed in 1707.  That is why the issue is climbing to the top of the UK’s political agenda. Many unionist voices urge a fresh start for the union to take account of these new circumstances. The prime minister Boris Johnson is also minister for the union. A cabinet committee on the union combines political strategies  to counter Scottish National Party success in May with wider plans to bolster the UK’s political order.

Any assessment of these far-reaching changes must distinguish between the UK’s union as a set of institutions and state structures, unionism as a belief system and ideology to justify them and unionists as individual or collective actors. There is ample scope for variation in each dimension. Thus the union can be: centralised around a southeast England power system; devolved as now and possibly reformed; or federalised to lock in a series of national and regional checks and balances. Unionisms vary according to their preference for one or other of such models. And unionists vary according to party affiliation and political orientation, including Labour, Liberal Democrat as well as Conservative versions. Despite its title the Conservative and Unionist Party has no monopoly on any of these dimensions but competes on each of them, as well as internally about them.

This crisis is therefore potentially existential for the UK’s party political system as well as its constitutional order. The Labour Party has comprehensively lost out to the SNP as Scotland’s natural ruling party. Yet most analysts agree it cannot achieve a Westminster majority in the existing electoral system without Scottish seats – or a coalition with the SNP. The condition for that would be a legal referendum on independence, potentially undermining Labour’s unionism. The Conservatives may not need Scottish seats to repeat their current majority at the next election, and may rely more on the surge of English nationalism underlying Brexit, but their leadership remains committed to the union.

Within the major parties there is a range of support for more unitary or more dispersed answers to the union question. Boris Johnson’s remark in a party discussion that devolution has been a disaster revealed his preference for an assertive centralised unionism capable of displaying the union’s benefits to Scots by explicit flagging of UK spending, allied to greater local government powers there and elsewhere. Other Conservative leaders around Michael Gove prefer to deepen devolution and thereby harness dissatisfactions with the SNP reflected in the one third of Scots voting Tory.

Both sides stress that the harder the Brexit the harder would be the economic border between an independent Scotland in the EU and an England where 60% of its exports go. Conservative supporters of the cross-party Constitutional Reform Group, such as the Welsh Conservative constitutionalist David Welding, support a quasi-federal answer incorporated in a new UK Act of Union. A similar approach is the centre of gravity for Liberal Democrat policy.

The Labour leader Keir Starmer recognises the growing importance of the union question in his call for a party-organised constitutional convention to address it. His notable caution on expressing explicit answers is in contrast to the federal vision put forward strongly by Gordon Brown, most notably in his call for a House of Lords transformed into an upper house of the UK’s nations and regions. Other Labour thinkers who take the issue seriously (not many of them yet do) gravitate towards empowering city regions and mayors in an England that lacks proper representation in the older imperial and administratively or politically devolved models of the UK.

This whole debate on the UK’s dual sovereignty crisis and constitutional future is consequential for Northern Ireland and the Republic in four major ways. The hard Brexit outcome has, first of all, galvanised the EU, the UK and Ireland into a new relationship expressed in the Northern Ireland Protocol. It keeps the North in the EU’s customs union and polices that through a border in the Irish Sea, subject to continuing consent of the Northern Ireland assembly in 2024. The confusions arising from its implementation during the COVID-19 crisis in recent days and weeks indicate just how difficult Northern Ireland’s hybrid status could prove to be.

The Protocol, secondly, reinforced the 1998 Good Friday Agreement by inscribing its provisions in an  international treaty between the UK and the EU. That in turn reinforced the determination of the new Fianna Fail/Fine Gael/Green coalition government in Dublin to deepen North-South relations by pursuing a shared island policy rather than planning for unity referendums as called for by the main opposition party, Sinn Fein. This debate on whether improved relations between the two traditions in Ireland should substitute for, precede or flow from a unity process is set to continue and probably intensify under Brexit. That will bring it towards the top of the Irish political agenda as well as the British one.

The two constitutional debates are entangled in Brexit and intersect in its fallout for Britain and Ireland. This political reality is only now being properly acknowledged and expressed, in the third main consequence of Brexit. The pace and force of the UK debate deeply affect the Irish one. Scotland’s future trajectory will increasingly set precedents for, and be affected by Northern Ireland’s. For Scotland and Northern Ireland, referendums, borders and EU membership are common and shared issues – as they are for the Irish and UK governments. Any unity referendums in Ireland will find both governments playing a role for or against union and unity.  That is all the more reason to think through these processes and prepare for whatever outcomes they produce.

The fourth consequence follows from that political realisation of convergent yet contested futures. The UK’s decision to pursue a hard Brexit puts great strain on British-Irish relations as well as on North-South relations in Ireland. The two states’ mutual geography and deep interdependence makes it essential they create and maintain regular structures to manage their relations, whatever the outcomes of Brexit and however British and Irish constitutional futures materialise in coming years. These structures may use and develop those created in the 1998 agreement or seek out new ones, a process also which also deserves close analysis to anticipate and prepare for change in the coming period.