Pat Kehoe, Former Chief Executive of Bord Iascaigh Mhara, examines the impact of the EU-UK deal on fisheries, highlighting some of the challenges it poses for the Irish fishing industry. 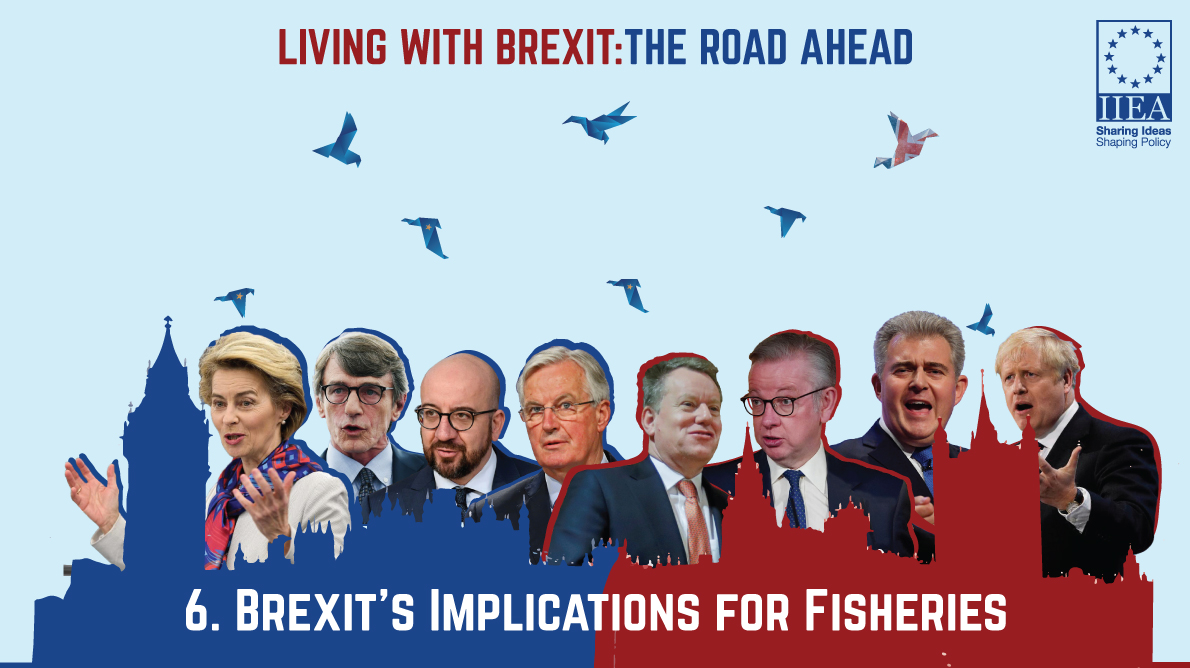 The sixth blog in the series, by Pat Kehoe, IIEA Member and Former Chief Executive of Bord Iascaigh Mhara (the Irish State agency responsible for developing the seafood industry), outlines the impacts of the EU-UK Agreement on fisheries, which was one of the key sticking points in the negotiations. The author finds that the deal has the potential to create longer term structural imbalances for the Irish fishing industry. In the medium term, the adjustment challenges facing the industry will need to be addressed with support from the EU Brexit Adjustment Reserve and national funds

Negotiations on fisheries proved to be one of the most intractable elements of the Trade and Co-operation Agreement (TCA) between the EU and the UK and held up final agreement on the overall deal until the afternoon of 24 December 2020. The new agreement provides for a 25% aggregate reduction over the next five and a half years in the quotas available to the EU27 fishing fleets in UK waters enabling a corresponding increase in the quotas for the UK fleet in its own waters. The Irish fleet takes approximately 34% of its landings from UK waters and will be seriously affected by this further curtailment in fishing opportunities.

The Irish seafood industry’s contribution to GDP, estimated at €1.22 billion[i] in 2019, constituted 0.3% of GDP (or 0.5% of modified GNI) but provided employment, directly and indirectly, for 14,360 people in coastal areas. However, its relatively small size in national economic terms belies the significant economic, social and cultural contribution which the industry makes to coastal communities in often remote and disadvantaged regions as well as the contribution of related sectors dependent on it such as fish farming, fish processing, transport, distribution, tourism and ancillary activities. To assess the impact of the recent EU/UK Brexit agreement on the Irish seafood industry it is useful to briefly review the historic background.

For centuries, the rich and extensive fishing grounds around Ireland and the UK have been exploited by the fishing fleets of European countries. Under the 1964 London Fisheries Convention and further confirmed in the Irish and UK Treaties of Accession to the EU in 1973, the fishing fleets of other Member States were free to fish outside a 12 mile coastal band (with certain other Member states enjoying historic fishing rights in the 6-12 mile zone). The 1970s saw the extension of exclusive economic zones (EEZ) by coastal states up to 200 miles. Following lengthy and difficult negotiations, a Common Fisheries Policy (CFP) was eventually agreed in 1983 which provided, inter alia, for a share-out of fish catches in Community waters in accordance with a fixed key based mainly on historic catches by Member States in the period of 1973 (which became known as the principle of relative stability).

Scale of Waters and Fish Resources in Irish/UK/EU EEZ

As can be gauged from the chart below, Ireland and the UK have large EEZs relative to other Member States and have contributed some 10% and 17% respectively to Community waters. Over the 5 year period 2011-15, the total average annual fish catch[i] in the UK EEZ was 1,217,400 tonnes valued at €1,375.7 million. In volume terms, the UK caught 512,600 tonnes (42%) within its own EEZ with other EU Member States taking 704,800 tonnes (58%). The value of the UK’s catch within its own EEZ was €791.1 million (58%) while that of other Member states was €584.6 million (42%). It should be noted however, having regard to changes in Total Allowable Catches (TACs) since 2015, the figures quoted in the course of the negotiations have put the annual EU27 catch in UK waters at approximately €650 million. 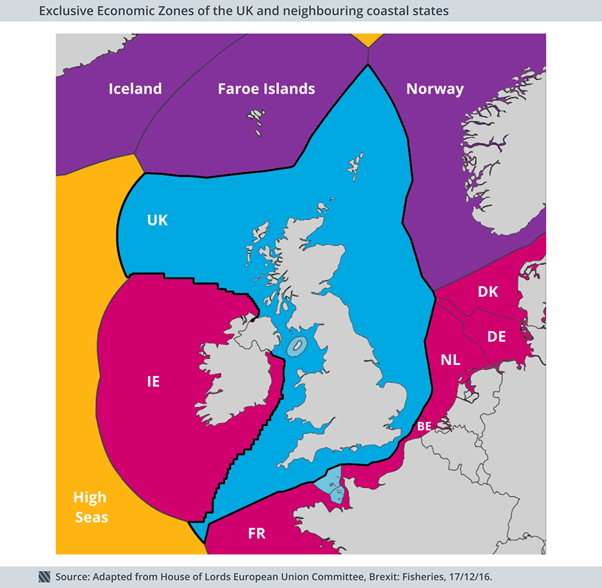 The new agreement on fisheries, which will be overseen by a joint EU/UK Specialised Fisheries Committee (SFC), stipulates that quotas available to EU27 vessels operating in UK waters will be reduced by 25% over the five-year adjustment period 2021-25. As set out in the Annex to the agreement, the quota reductions will be phased in, starting with an aggregate 15% reduction in 2021 and 2.5% annually thereafter over the following four years, reaching what appears to be a new baseline in 2025. These reductions, which are specified by species and fishing area, facilitate a corresponding increase in quota allocations to the UK fleet over the same period. It is noteworthy that the annexes show a further column headed ‘2026 onwards’ which specifies the same relative EU/UK quota allocations as for 2025 and these are therefore likely to represent the baseline for EU/UK quota allocations in subsequent years.

Within the framework of the SFC, the UK and EU are to co-operate and consult in relation to determining TACs for fish stocks in UK waters which will be based mainly on scientific advice. Fisheries management measures for stocks in UK waters will become the responsibility of the UK but will require prior consultation and must be non-discriminatory. TACs are to be agreed no later than 10 December in respect of the following year. The agreement provides for continued reciprocal access in the 6-12 mile zone for EU and UK vessels which have fished in those zones for at least four years in the period 2012-16.

From the end of the adjustment period in June 2026, access to each other’s waters will become a matter for annual negotiation, subject to the qualifications set out above. Should there be changes in access arrangements in UK waters which are unacceptable to the EU, the latter may adopt compensatory measures by limiting access by UK vessels to EU waters and/or the suspension of preferential tariffs on imports of fish products from the UK into the EU. This latter provision applies both ways but the heavy reliance of the UK on fish exports to the EU, as illustrated below, means that this measure confers far greater muscle on the EU. There is provision for prior notification to the affected party of proposed compensatory measures and for adjudication by an arbitration tribunal, but, notably, invocation of WTO is ruled out under the agreement. Under a review clause, all aspects of the EU/UK fisheries agreement are to be reviewed four years after the end of the adjustment period (in June 2030).

EU/UK Supplies and Trade in Seafood

There is a significant amount of content in the agreement’s 1300 pages, including provisions for social services, energy, air and road transport, and other matters of import, but a number of key issues stand out for Ireland in particular, and merit some further discussion in this short analysis.

A factor highly relevant to the operation of the new EU/UK fisheries agreement is the importance of the European Union as the largest import market for seafood in the world with a self-sufficiency ratio of 43% in 2017. In that year, the total EU(28) catch was 5.429 million tonnes with aquaculture producing a further 1.372 million tonnes which was supplemented by imports of 6.322 million tonnes of seafood from outside the Union valued at €26.53 billion.

A key overall feature of the UK seafood market is that what it catches it tends to export and what it consumes it tends to import reflecting the traditional predilection of UK consumers for whitefish (coming mainly from Nordic countries) as opposed to shellfish and pelagic fish[i] which it mainly exports to the EU27. Thus, of total UK seafood exports in 2019 valued at £2,015 million, as much as 67% was directed into other EU markets.

Reflecting its low self-sufficiency and high raw material demand for its processing industry, the EU has adopted a fairly liberal import regime for fish products with duties ranging from zero for most fish raw material up to 20-25% on processed fish products.

The recent fisheries agreement has been met with grave disappointment on the part of fishermen’s representative organisations—in the UK because the 25% quota ‘repatriation’ fell so far short of the 80% or so that was initially expected and, in the Irish case, by having to forego what is clearly a disproportionate share of the 25% reduction in EU fishing opportunities in UK waters, given that the Irish fleet was already heavily constrained by generally low quota allocations in its own waters.

In 2018, the Irish fishing fleet consisted of 2,127 vessels, directly employing 3,231 people with a further 11,130 employed in fish processing and other related industries. Of total Irish landings of 191,700 tonnes valued at €269.4 million, it is estimated that as much as 34% originated in UK waters. More than 70% of the total Irish fishing fleet, greater than 12 metres in length, operating in both whitefish, prawns (nephrops) and pelagic fisheries, will be impacted by reduced access to UK waters.

According to a preliminary analysis carried out by the Department of Agriculture, Food and the Marine, the recent EU/UK agreement will lead to an annual reduction in the value of Irish fish quotas of €26 million in 2021 rising to a reduction of €43 million by 2025, representing an aggregate cutback of 15% by 2025 in comparison to Irish fish quotas in 2020. The main brunt of the reduction will be borne by the mackerel and prawn catching sectors where the total Irish quotas are due to fall by 26% (€28 million) and 14% (€8 million), respectively, which will lead to a consequent reduction in the raw material supply base for the shore-based processing industry. By comparison, Irish quotas for herring and a range of whitefish species will suffer proportionately lower reductions but their impact is not insignificant given the generally low pre-existing Irish quota shares for these species relative to share of waters.

In reality, all sectors of the Irish fleet are likely to be either directly or indirectly affected to varying degrees by reduced fishing opportunities in UK waters as the displaced vessels, whether of French, Spanish, Irish or other European nationality, seek to increase their fishing effort in waters around Ireland.  Obviously, other Member States’ fish quotas in Irish waters will place upper limits on fishing activities (assuming strict enforcement) but this may not be a barrier for some countries, notably France, where historic catches of certain whitefish species have traditionally been somewhat below quota levels. The reduced fishing opportunities in UK waters, which are heavily front-loaded in 2021, will not only impact vessel viability, but create a longer term structural imbalance between fleet capacity and resource availability with consequences not just in the catching sector but in diminished activity in shore-based processing and ancillary industry. While in the first instance every possible means should be pursued at national and EU level to alleviate the scale of the disproportionate reductions in Irish fish quotas, in the medium term, the adjustment challenges facing the industry will need to be addressed with support from the EU Brexit Adjustment Reserve and national funds.

[i]This estimate of the industry’s contribution to GDP published by Bord Iascaigh Mhara in ‘The Business of Seafood 2019’, includes not only the catching sector but also aquaculture, fish processing and ancillary industry.

[ii] Sourced from ‘Brexit and the Irish Fishing Industry Factsheet June 2018’, Department of Agriculture, Food and the Marine based on data supplied by the Marine Institute.

[iii] Pelagic fish, such as mackerel or herring which generally have oily flesh and swim/shoal in mid-water or close to the surface.