Part Six of the IIEA’s February 2018 Brexit Status Report series is written by John McGrane, Director General of the British Irish Chamber of Commerce, describes the ‘Big Principles’ required for an effective future relationship between the EU and UK.

Part Six of the IIEA’s February 2018 Brexit Status Report series is written by John McGrane, Director General of the British Irish Chamber of Commerce. In this contribution he describes the ‘Big Principles’ required for an effective future relationship between the EU and UK.

The events in the Brexit process which led to the Joint Report from the EU and UK negotiators on 8 December 2018 show that, in politics, anything is possible among people who want – or need – to agree. But politics are fraught with danger too and so the voice of business is all the more important now in helping to devise trade-inspired solutions to genuine political problems.

While many have reasonably called on business to engage more in the Brexit debate, it is not generally appreciated that there is in fact no single cohesive ‘voice of business’ on this matter. In the UK, this simply reflects the fact that business owners are citizens too, and in many cases are personally as ambivalent regarding the UK’s relationship with Europe as the wider British populace. Secondly, global businesses will largely take Brexit in their geopolitical stride while small local enterprises frequently (and wrongly) believe Brexit won’t affect non-internationally trading firms. Mid-scale trading businesses are only slowly realising the myriad disruptions that Brexit will wreak on their trading model.

Without a membership united behind a single preferred form of Brexit, representative trade organisations in the UK have struggled to deliver a compelling lobby, allowing wider political dithering to continue to a dangerously late hour. Meanwhile, in Ireland and the other EU 26 Member States, local business organisations typically seek to defend the local market against potential aggressive competition by a post-Brexit UK. The British Irish Chamber of Commerce uniquely considers the two-way trading environment between our two islands, neutrally assessing benefits and risks in a relationship of unique connectedness.

Many potential models for the future relationship have been floated. The most common of these include the ‘Norway Model’ (membership of the European Economic Area); the Turkish Model (a customs union with the EU); the Swiss Model (based on a number of bilateral agreements); the Canadian model (a modern, bilateral free trade agreement); and in the worst-case scenario, a trading relationship based solely on WTO rules. However, as the box below shows, none of these models alone satisfies the requirements of either side. 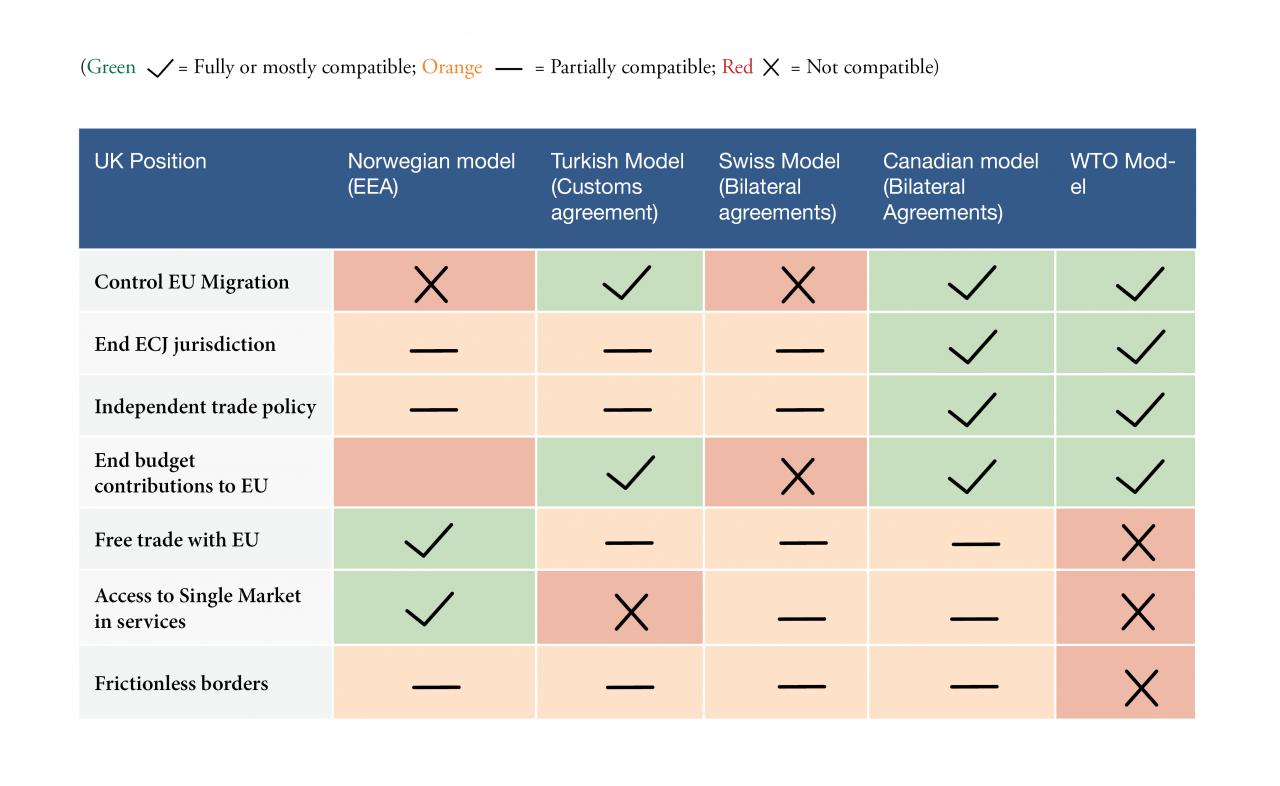 In light of these unsatisfactory options, the British Irish Chamber of Commerce has published a short set of key principles to help end the negotiating vacuum between the UK and the EU. These “Big Principles for a Strong Brexit Partnership” set out a new narrative respecting both the outcome of the UK referendum in support of some form of Brexit, and equally the EU’s reasonable need to understand exactly what kind of Brexit the UK might actually want.

‘Big Principles’ for the Future Relationship

The ‘Big Principles’ provide a template capable of agreement by all the participants to pre-empt the risk of the UK crashing deal-less out of the EU. Like any strawman proposition, these Big Principles involve choices between competing ideals – specifically between controls on free movement of people and on independent global trade deals.

On the latter, businesses and wider observers might usefully enquire as to exactly which country does the UK government want to independently trade with that it does not already (or soon will) through membership of the EU? Furthermore, with which of these potential trade partners could a deal be struck on terms agreeable by the UK?

The answer is not the USA, whose Commerce Secretary, Wilbur Ross, recently made clear that “even our friends have to play by the rules” – i.e. rules set by the USA.

Neither is the answer India, whose trade deal priority is passports for more Indians to migrate to the UK. The EU is already developing a Trade Agreement with Australia and New Zealand and any UK deal with China will obviously favour the larger nation.  So it makes no sense for the UK to demand freedom to agree its own trade deals independently, citing only a populist, and ultimately meaningless, “Global Britain” slogan and risking a no-deal disaster.

At the other end of the wish-list of what matters to the UK people, there has been no obvious change since the referendum in the perception of immigration. Free movement is clearly a core tenet of the Single Market framework, so it is not possible for the UK to retain membership of the Single Market given the gap between the UK and the EU on this defining issue.

So, what is set out in this ‘Big Principles’ initiative is a pragmatic recognition of the UK’s genuine predicament. The UK must now clearly choose whether control over free movement  of people is more important to it than freedom to trade with some un-named low trade-value countries. The answer to that is obvious and it consequently defines the nature of the post-Brexit relationship that the UK actually wants to negotiate with the EU – the UK will leave The Customs Union of the European Union but will participate with the EU in A New Customs Partnership.

This will allow for continued trade of Goods with a comprehensive deal also for Services, and for co-development of new trade deals and rational cooperation in key common-interest areas. The EU already has a tailored bilateral customs arrangement with Turkey and, given the globally significant scale of the UK, it makes sense to include the UK in any future trade deals agreed by the EU given the UK’s attractiveness to third countries alongside the EU 27.

These Principles can only be high-level at this stage and they will need a Transition Phase of “as long as it takes” for the detailed implementation work. But they positively disrupt the current dangerous vacuum and they put a specific package of ingredients on the table that can deliver real practicable solutions, with the least amount of compromises for either the UK or the EU.

Advantages of this model

This proposed approach can deliver:

Trade-offs on both sides

As to the rational questions of “is this not the UK having its cake and eating it” and “why would the EU agree to such a relationship?”, in the real world neither side of any negotiation gets everything it wants and, in these proposals, a fair set of trade-offs arises as it must in any negotiation in good faith:

It is worth noting also that many, if not all, of these elements have been variously hinted at in various UK discussion documents since mid-2017.  What has been missing is the aggregation of them into a single template that not only breaks the critical deadlock on Northern Ireland’s border but goes on to solve almost all issues – both for citizens and for employers – with the least compromise for either the UK or the EU.

The British Irish Chamber of Commerce has put forward these Big Principles for a Strong Brexit Partnership as a set of implementable solutions for constructive critique amid a political vacuum. For those who reasonably may object to specific elements, their responsibility is to propose implementable alternatives that reflect the reality of the new relationship between a former Member State and the ongoing, unchanged core EU framework.

With the clock counting down to success or failure and with investment in the UK already slowing, the UK’s weakened currency already raising UK prices and key talent already leaving the UK well before any actual Brexit, a hard Brexit will be disastrous for countless citizens and employers and inexcusable for those who permit it.