On 10 January, Labour Party Leader, Jeremy Corbyn, travelled to Peterborough – which voted 61%-39% for Leave – to spell out his party’s position on Brexit and, in particular, on the crucial issue of immigration. 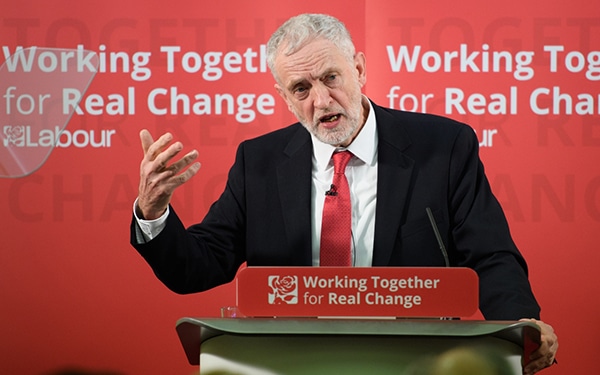 On 10 January, Labour Party Leader, Jeremy Corbyn, travelled to Peterborough – which voted 61%-39% for Leave – to spell out his party’s position on Brexit and, in particular, on the crucial issue of immigration.

Jeremy Corbyn opened his speech with the claim that “only a Labour government, determined to reshape the economy so that it works for all, in every part of the country, can make Brexit work for Britain.”  Mr Corbyn also warned that Theresa May’s Conservatives must not be given “a free pass in the Brexit negotiations”, that they must not be permitted “to entrench and take still further their failed free market policies in a post-Brexit Britain.”

He told his audience that the referendum result had delivered a very clear message to Labour:

o   First, that Britain must leave the EU and bring control of our democracy and our economy closer to home.

o   Second, that people would get the resources they were promised to rebuild the NHS.

o   Third, that people have had their fill of an economic system and an establishment that works only for the few, not for the many.

o   And finally, that their concerns about immigration policy would be addressed.

Fully accepting the political challenges inherent in these messages, the Labour leader stated that it would be necessary to push to maintain full access to the European single market to protect living standards and jobs. This would require repatriation of powers from Brussels for the British government to develop a genuine industrial strategy essential for the economy of the future for the country as a whole:

“Tory governments have hidden behind EU state aid rules because they don’t want to intervene. They did so again last year when the steel industry was in trouble. Other governments in Europe acted and saved their industry, the Tory government here sat back.”

Jeremy Corbyn then turned to the question of immigration. He began by stating that Labour would take control of the jobs market, which he claimed had been seriously damaged by “years of reckless deregulation.” For Corbyn, many sectors of the economy – from IT to health and social care and across the public services – were dependent on the contribution of migrant workers. Labour, he stated, would not make false promises on immigration targets or sow division by scapegoating migrants.

He went on to say that “Labour is not wedded to freedom of movement for EU citizens as a point of principle, but I don’t want that to be misinterpreted, nor do we rule it out.”  The priority for Labour would be the economy and jobs and this meant that the UK “cannot afford to lose full access to the European markets on which so many British businesses and jobs depend. Changes to the way migration rules operate from the EU will be part of the negotiations.”

Mr Corbyn announced that Labour will support fair rules and the reasonable management of migration as part of the post-Brexit relationship with the EU, while putting jobs and living standards first in the negotiations. However, for Labour, it will be essential to take action “against undercutting of pay and conditions, closing down cheap labour loopholes, banning exclusive advertising of jobs abroad and strengthening workplace protections” as such measures would reduce numbers of EU migrant workers in the most deregulated sectors, irrespective of the outcome of the negotiations concerning Britain’s exit from the EU.

The Telegraph stressed that the following question had to be answered: “would Jeremy Corbyn accept freedom of movement if it was the only way to maintain access to the single market?” A senior Labour Party insider was quoted in the Financial Times as saying that “[Mr Corbyn has] distanced himself from his own speech. I wish he’d just stick to one position.”  The New Statesman remarked that the Labour leader was “walking a fine line between trying to please pro-Remain members and voters who want to Leave.”

These lines in the Mr Corbyn’s speech, which were not briefed the day before, led critics to accuse Labour of adopting a confused approach to the issue. A Conservative party spokesman claimed Labour’s position on immigration “changes daily,” while Liberal Democrat foreign affairs spokesman Tom Brake said Corbyn’s speech had left the country “no closer to knowing where Labour policy on Europe differs from the Tories.”

Politico reported that Mr Corbyn responded to a question with the following:

“We have done well as a country out of those who have come to make their homes here.  The numbers vary from year to year. In five years’ time we’re quite possibly going to be outside the European Union, we’re still going to need to be trading with the European Union. We also have an ageing population that does require a younger workforce.”

He also said that Labour would support “fair rules and management of migration” as part of a Brexit deal, “while putting jobs and living standards first in the negotiations.”

In a New Statesman article in October, the economics commentator, Paul Mason, wrote of a wariness – shared by some on the Corbyn side, as well as the Labour right – to commit to remaining inside the European Economic Area. He claims that this wariness is born of the assumption that a commitment to the single market implies acceptance of free movement of labour. However, Mr Mason believes that the flaws in this approach were expressed perfectly by the Labour Party’s new spokesman on Brexit, Keir Starmer, stressing that “first it’s a negotiation, not a finished relationship; second, you start from the economics, not the migration issue. Leaving the single market will be a macroeconomic disaster, compounded by a social catastrophe, in which all the European protections – of citizens’ rights, labour rights, consumer and environmental standards – will get ripped up. That’s why the Labour front bench must commit to staying inside the single market, while seeking a deal on free movement that gives Britain time and space to restructure its labour market.”

The Peterborough speech, and the reaction to its approach to immigration, demonstrates the difficult situation in which Labour finds itself under the controversial leadership of Jeremy Corbyn. The Labour Party argues that its vision for Brexit is clear:

“Labour will not block the referendum vote when the time comes in Parliament, we will vote for Article 50. But as the Opposition we will ensure the government is held to account for its negotiating demands.”

However, the terms upon which Labour carries out this scrutiny of the UK Government’s negotiating demands will no doubt continue to be contested.