As the debate on the implications of Brexit continues, the dramatic victory of Donald Trump in the US Presidential Elections has added a new element to an already complicated and challenging situation. 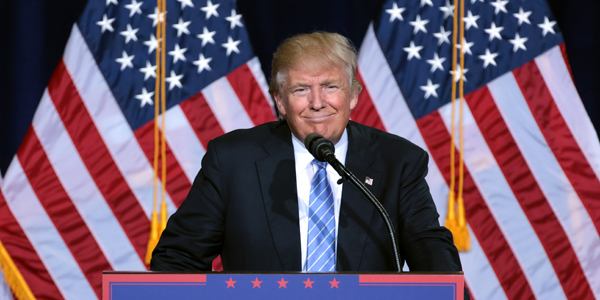 As the debate on the implications of Brexit continues, the dramatic victory of Donald Trump in the US Presidential Elections has added a new element to an already complicated and challenging situation. As world leaders extended cautious congratulations to the President-elect Donald Trump, the comments of one European party leader struck a rather different note.

Marine Le Pen spoke in positive terms about Mr. Trump’s election, describing it as “good news for France” which heralded the dawn of a new world order. She further declared that the election “should be interpreted as the victory of freedom”, interpreting Trump’s success as a sign of western populations breaking away from “a system that hampers them.” Her chief strategy adviser, Florian Philippot, announced on Twitter that the “world [of the political elite] is collapsing, ours is being built.”

In France, the two-stage Presidential election will take place in April and May 2017 and the current polls point to a second-round run-off between Marine Le Pen and a centre-right candidate, most likely the former Prime Minister Alain Juppé. The socialists appear to be out of the running following the unpopular Presidency of Francois Hollande. However, one leading pollster, Francois Miquet-Marty, noted that many people are already assuming that Alain Juppe will become the next president. He believes that this attitude is causing some exasperation among the electorate, who he says see it as a “denial of democracy”.

Indeed, over the past year, there have been several notable, incorrect predictions from professional opinion pollsters, with polls and media coverage predicting a Hillary Clinton victory in the US Presidential election and a Remain vote in the UK’s EU referendum. In France, predictions of an Alain Juppé victory over Marine Le Pen have been similarly widespread. Mr Miquet-Marty further commented that “French voters do not like to be told in advance what the result of an election will be”. This practice, he notes, “has played into the hands of outsiders before, and it could benefit Mrs Le Pen this time.” One former Prime Minister, Jean-Pierre Raffarin affirmed that “[r]eason no longer prevails since Brexit. Mrs Le Pen can win in France,” while another, Dominique de Villepin, stated that “what’s happening in the US could happen in France.”

Parallels between the US and France?

According to The Economist, the parallels between Marine Le Pen and Trump are striking:

“Both trade on simplified truths and build politics on rejection and nostalgia. They have both reinvented themselves as anti-establishment outsiders, who stand up for people forgotten by the system and scorned by the elite. They speak to the same white working-class rage, use similar vocabulary, and thrive each time the establishment sneers at them.”

Mrs Le Pen and Mr Trump also share strong protectionist and nationalist views and are sympathetic both to Brexit and Putin’s Russia. Marine Le Pen receives support from the working-class communities in the old industrial and mining towns of northern France, once the stronghold of the Communist Party. A specific and highly controversial element of Marine Le Pen’s policy is her advocacy of French exit from the Eurozone and the restoration of the French Franc.

Mr Juppé and Mrs Clinton too have very similar political profiles – both have been active in national politics for several decades, serving terms as Foreign Minister or Secretary of State in their respective countries. They appear to share a range of policy positions, including a belief in the benefits of globalisation and US-Europe relations. Mr. Juppé is deeply committed to European integration. Both candidates could be seen as representing mainstream opinion, favouring an incremental approach to reform and tackling social issues.

Politico’s Nicholas Vinocur asked: “Now that Trump has been elected, will fate make a mockery of polls in the case of Mrs. Le Pen as it did with President-elect Trump? The French and American election systems differ so vastly, particularly in that a French candidate needs to win at least 50 percent of the vote, that direct comparisons make little sense. No matter. The underlying trends that carried Mr. Trump to power are also present in France, and they are likely to fuel an inordinately strong performance by Mrs Le Pen next May — perhaps even her victory.”

A boost for populism in Europe?

Mrs Le Pen’s comments in the wake of Mr Trump’s victory were mirrored in the remarks of the leaders of right-wing parties across Europe. Geert Wilders, founder and leader of the Party for Freedom in the Netherlands, which is due to hold a general election in March 2017, tweeted “your victory is historic and for all of us!”. The leader of the Austrian Freedom Party, Heinz-Christian Strache, who will face a close presidential election in early December 2016, wrote on Facebook that “bit by bit, the political left and the out-of-touch and corrupt establishment is being punished by voters and driven from the seats of power”. The leader of Alternative für Deutschland, Frauke Petry, characterised Trump’s victory as “encouraging” and heralding political sea-change in Europe. Hungarian Prime Minister Viktor Orbán, meanwhile, commented that “democracy is still alive.”

There can be no doubt that the twin drama of Brexit and Mr. Trump’s election constitutes a real challenge to a European Union already struggling with the migration crisis and the continuing fall-out of the 2008 recession. The choice of French voters less than six months from now has the potential to greatly exacerbate the European Union’s malaise. Notwithstanding the French decision, the debate on the future of the Union takes on a new urgency. The Bratislava Roadmap – aimed at producing meaningful EU responses to Brexit and the other recognised challenges, yet criticised for lack of ambition and focus – now becomes a framework for reflection, consultation and decision-making among the Europe of 27.