The EU’s Brexit Phase Two negotiating guidelines aim to maintain an arrangement close to the status quo for at least two years.

On Friday, 15 December, the European Council published its guidelines for Phase Two of the negotiations in the UK’s withdrawal from the European Union. The guidelines arrived in the wake of the Council’s declaration that ‘sufficient progress’ had been made on the Phase One issues, which included citizens’ rights, the UK’s financial settlement, and issues for the island of Ireland.

The new negotiating mandate sketches out the sequencing and content of the next phase of the negotiations, which will cover the UK’s transitional arrangements and a framework for future relations. They will be followed by a more detailed set of negotiating guidelines in January.

In the original timeline laid out by the European Commission, it was foreseen that the framework for the future relationship would be the first issue of this round. In order to provide clarity and certainty to business and other stakeholders, however, the negotiators will now begin Phase Two with discussion of the UK’s post-Brexit transitional arrangements.

Detailed EU negotiating guidelines for this will not be published until early January, but it is hoped that an agreement in principle can be reached early in 2018 – perhaps as soon as the European Council summit of 22-23 March 2018.

The Phase Two guidelines also note that unresolved issues from Phase One will continue to be discussed in Phase Two, including issues relating to rights of citizens, and to Ireland and Northern Ireland.

Notably, they also underline that negotiations in the second phase can only progress as long as all commitments undertaken during the first phase, including those regarding the Irish border, are respected in full and translated faithfully into legal terms as quickly as possible.

The EU guidelines envisage a time-limited transitional period of ‘around two years’. This timeline is somewhat vague – and deliberately so, considering that the negotiations over the UK’s final trade relationship with the EU could conceivably take longer than this.

The guidelines suggest that the EU prefers a transitional period that would cover “the whole of the EU acquis” – in other words, an agreement that would be very similar to the status quo of EU membership, including continued Customs Union and Single Market membership, with the significant exception that the UK would not be represented in the EU institutions or agencies.

Some elements of such a deal could prove controversial in the UK. For example, the EU envisages that the UK would:

Each of the issues listed above was a red-line for the pro-Brexit camp in the UK. However, if such an arrangement is viewed favourably by the UK Government, it is possible that the strictly time-limited nature of the transition could temper domestic opposition.

Furthermore, while the UK’s continued membership of the Customs Union will of course stall the UK’s stated goal of achieving an ‘independent trade policy’, as a non-EU state the UK would be permitted to at least begin negotiating free trade deals with other non-EU countries during the transitional period.

From a purely practical point of view, it is also unlikely that any significant new trade deals could be concluded by the UK in the short transitional period, particularly while simultaneously negotiating its future trade relations with the EU. In this context, it would make economic sense to continue to avail of full access to the EU Single Market, even if it entails continued free movement of EU citizens for the two-year transition (though, of course it is true that economic logic has rarely triumphed in the Brexit debate).

While the continued budgetary contributions to the EU are unlikely to be seen favourably, it should be noted that the UK has in fact already agreed to these budgetary contributions, as part of the financial settlement agreed in Phase One, and that UK recipients will continue to benefit from EU funding up to the end of the current budgetary period in 2020 at least.

The question of the continued oversight of the CJEU during this period may be more difficult for Theresa May to sell to a domestic audience, and it is also somewhat unclear how this oversight would operate in practice. The precise role of the EU Courts during the transition may need further elaboration in the course of negotiations, as was the case during the negotiations over citizens’ rights in Phase One.

Nonetheless, this is simply the starting point for further negotiation, and overall it is a positive and practical first step. A transition that largely preserves the status quo is undoubtedly the preferred option for Ireland, in particular, as it would maintain the current trade relations with the UK and allow time for business to adapt ahead of the UK’s full separation.

Most importantly, it would also permit time for a considered discussion on the future of UK-Ireland cooperation, as well as the practical methods of avoiding a hard border on the island of Ireland.

More detailed negotiating guidelines on the transitional arrangements will be published by the EU in January 2018.

The parties will aim to achieve agreement in principle on this first issue by the time of the European Council on 22-23 March 2018.

Assuming progress on this first issue, and assuming a timely communication of the United Kingdom’s position, negotiating guidelines on the framework for the future relationship will be published in late March. 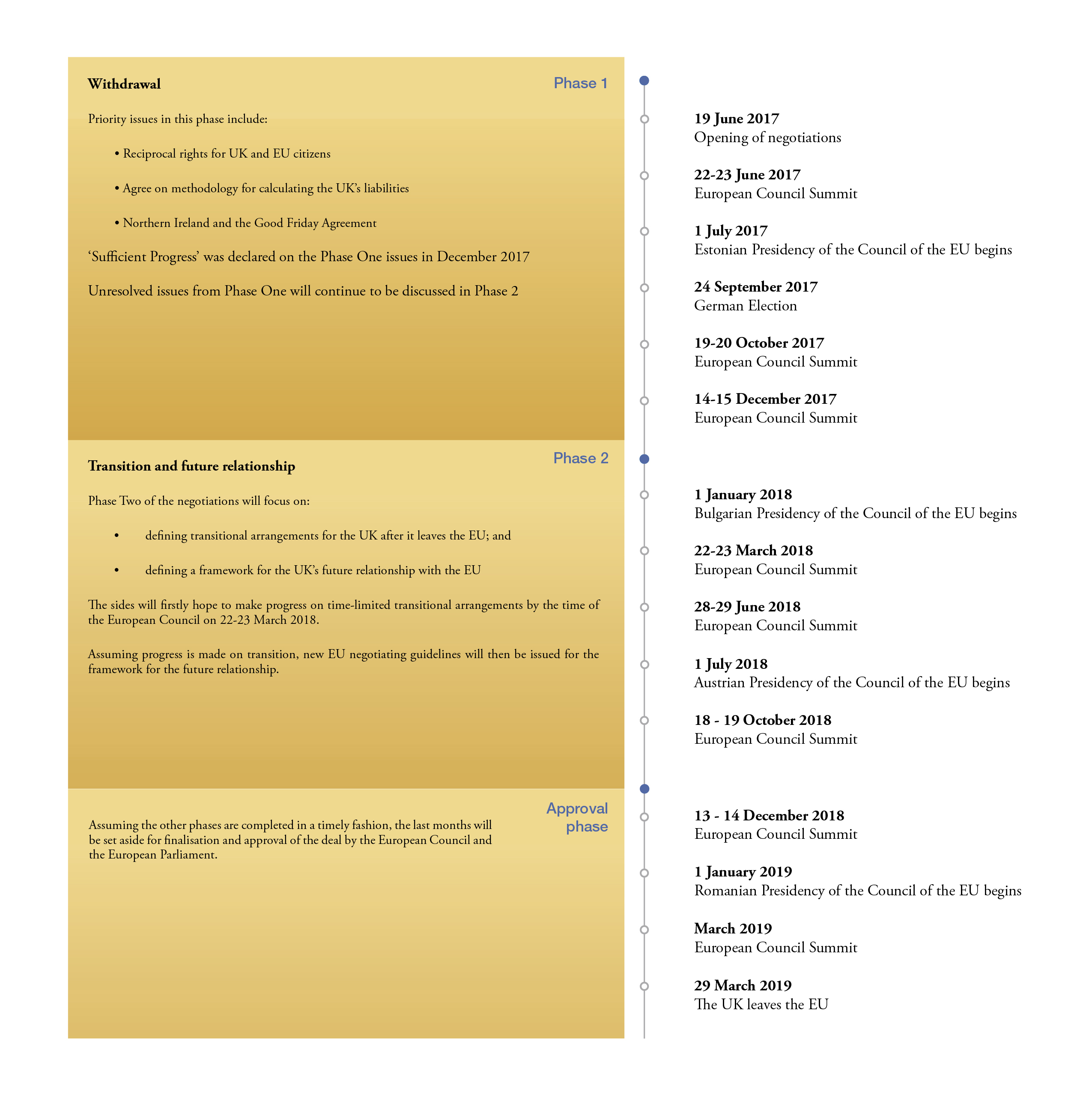