In this blog, Tom Ferris examines the possible effects of Brexit on NI port traffic, and discusses the extent to which Irish Companies are prepared for the post-Brexit world of 2021. 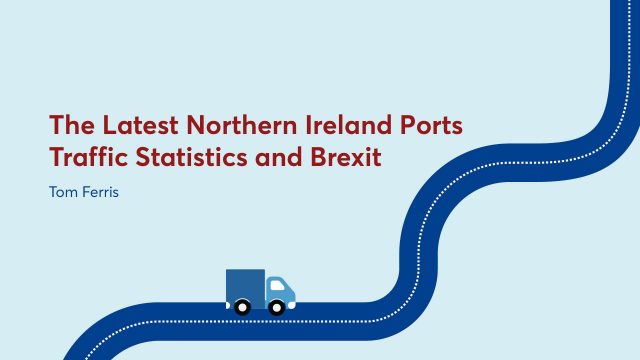 Tom Ferris is a life member of the Institute of International and European Affairs. He was formerly the Department of Transport’s Senior Economist.

The latest Port Traffic Statistics for Northern Ireland have relevance to the Republic of Ireland and Brexit, particularly the Roll-on/Roll-off (RoRo) and the Lift-on/Lift-off (LoLo) statistics. The statistics were published by Northern Ireland Statistics and Research Agency (NISRA) on 1 October 2020. They refer to the year 2019.[i]Many Irish companies use Northern Ireland ports to access raw materials and to export finished goods. The question now arises as to whether such traffics will continue through Northern Ireland Ports after 31 December 2020. A previous IIEA blog explores this phenomenon in detail, and can be accessed here.[ii] This new blog will examine some of the implications of the new range of statistics and the extent to which Irish Companies are prepared for the post-Brexit world of 2021.

How much Republic of Ireland traffic traverses Northern Ireland Ports?

The question arises as to whether the market share achieved by Northern Ireland has changed since the result of the June 2016 UK Referendum signalled the prospect of the introduction of border procedures?  The evidence shows, somewhat surprisingly, that there has been only a marginal change in Northern Ireland’s market share. A previous IIEA paper from 2017 had shown that 36% of all container movements went through Northern Ireland ports in 2015.[iv]This is a reduction of only 1.4 percentage points in the four years between 2015 and 2019. It might well be that more recent data, for 2020, will show more significant changes in market shares. In the interim, Table 2 shows the data for 2015 and 2019.

If Republic of Ireland traffics are to avoid transiting Northern Ireland and Great Britain after December 2020, they can (if the goods are not perishable) move  on direct freight services to and from  continental Europe. Irish exporters and importers can consider moving, in advance of the end of the transition period, to direct routes for the movement of their goods between Ireland and the Continent; thereby avoiding potential delays under the regulatory environment that will be in place for the UK landbridge route after 31 December 2020.

In 2021 and subsequent years, many Irish companies may still wish to move their traffics on the UK Landbridge to and from mainland Europe via UK roads and ports. At present, Irish importers and exporters use the landbridge to transport high value or time sensitive goods, because it offers significantly faster transit times than alternative routes. The Irish Maritime Development Office (IMDO) produced a very useful study in 2018 on the important role that landbridge plays in Irish freight transport. The IMDO used CSO trade figures and port traffic statistics to measure the scale of landbridge traffics. It concluded that – “[…] the volume of RoRo traffic using the Landbridge to transport goods to and from European ports is approximately 3,000,000 tonnes, which equates to around 150,000 Heavy Goods Vehicles (approximately 16% of the RoRo traffic between Ireland and Britain)”.[v]This shows that, at present, the landbridge is an important route to market for many Irish importers and exporters. The introduction of border procedures between the UK and Ireland and between the UK and the continent is expected to impact negatively on the efficiency and speed of landbridge routes. Procedures, ranging from tariffs, customs controls (and delays) to the application of different vehicle standards and road charging, can take many forms, and all suggesting negative impacts.

After 31 December 2020, Irish companies trading with (or transiting) the UK will be dealing with a third country. From that day, the UK will no longer apply the rules of the Single Market and Customs Union. This means that any business, regardless of size, moving goods to and from the UK will be subject to a range of new customs formalities and other regulatory requirements. As I have argued recently in the Irish Times – “Those who still intend to continue to use landbridge routes need to accelerate their preparations for the transit customs declaration process that comes into operation after the end of December 2020”.[vi]

Plenty of advice is being provided by the Government to help make the necessary preparations for the future, with or without a deal. Specifically, the Department of the Taoiseach has produced very good advice on how to be ‘customs ready’ by 1 January 2020.[vii] In addition, there are a number of online training programmes designed to support Irish businesses develop their own customs capability. For companies, who do not wish to provide their own customs capability in-house, there are a number of commercial companies who provide a composite range of customs services. By availing of multinational e-customs transit services, Irish businesses will not need to have comprehensive financial guarantees in place or software that is adapted for customs.

So, is Irish Business ready? The Revenue Commissioners do not think so.[viii] Based on contacts with businesses to date, Revenue indicated, on 1 October, its concern about the level of Brexit readiness by some businesses. Specifically, Ms Lynda Slattery, Head of Revenue’s Brexit Policy Unit, stated that – “We have seen a welcome increase in the level of customs registrations with some 1,300 registrations completed in September alone. But some businesses seem to mistakenly believe that Brexit will not actually happen and are not getting Brexit ready.”

The Revenue Commissioners have intensified their efforts to get more Irish Businesses ‘customs ready’. Over the last three weeks, Revenue has written to 90,000 businesses, and directly contacted over 2,500 businesses by phone, as part of its ongoing, broad and comprehensive Brexit trade engagement programme. At a minimum, companies have to acquire an Economic Operators Registration Identification (EORI) registration process; this can be done fairly quickly through the Revenue Online Service (ROS). Where queries regarding Brexit Customs have not been answered by the material available on the Revenue website, companies can email enquiries to a dedicated email address or ring a dedicated line to discuss Brexit preparations. But in the final analysis, it is the companies themselves that have to take action.  It is their responsibility to decide if they will use direct routes to the continental Europe or use Landbridge routes, for which they will need to have made all of the necessary arrangements for the advent of a new transit customs declaration process.

[v] Irish Maritime Development Office, ‘Implications of Brexit on the use of the Landbridge’, 2018 https://www.imdo.ie/Home/sites/default/files/IMDOFiles/A143219%20IMDO%20Landbridge%20Report-digital-draft1.pdf

[vii] Department of the Taoiseach, ‘Transport and Logistics’, 9 December 2020, https://www.gov.ie/en/publication/d0334c-transport-and-logistics/