Ahead of the October Council, the fifth round of Brexit negotiations took place between 9-12 October 2017. While there has been some progress recorded on the issues of citizens’ rights and the island of Ireland, there remains a significant distance to bridge between the UK and EU positions, particularly on the UK’s financial settlement. 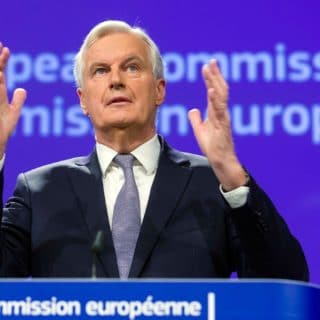 The European Council summit takes place from 19-20 October this week. The UK had hoped that ‘sufficient progress’ would be made in its EU withdrawal negotiations by the time of the October Council, and as such this would seem an appropriate juncture to take stock of the state of play in the negotiations.

Ahead of the October Council, the fifth round of Brexit negotiations took place between 9-12 October 2017. While there has been some progress recorded on the issues of citizens’ rights and the island of Ireland, there remains a significant distance to bridge between the UK and EU positions, particularly on the UK’s financial settlement.

The Council meeting on 19-20 October will nonetheless assess the progress made to date on the three key issues for phase one:[1]

In the absence of agreement on the three key issues above, it is self-evident that EU Heads of Government will not declare that ‘sufficient progress’ has been made in the negotiations at the European Council summit of 19-20 October 2017.

However, while the October Council has been presented in some sections of the media as a ‘deadline’ for this milestone, in truth this was never the likely, nor expected, timeframe for sufficient progress to be made in the negotiations. It is important to recall that, as shown in the diagram on below, the original timeframe published by the European Commission noted the subsequent European Council summit in December as the decisive moment in Phase One of the negotiations.

The Negotiations: A timeline

The sections below present a brief overview of the current state of play on the three key issues for the first phase of the negotiations.

This issue remains as it has been since the negotiations opened: deadlocked. The EU’s position has not changed since it published its paper on calculating the methodology in advance of the negotiations: the UK must settle financial commitments arising from its membership of the Union, and from programmes to which it has committed in that context.

The UK meanwhile, is yet to put forward a formal position, and has still not produced a paper on the topic.

In her speech in Florence on 22 September 2017, Theresa May stated that the UK would honour the financial commitments entered into as a member of the Union. This was seen in the EU as an important commitment. However, last week the UK repeated that it was still not ready to spell out the details of that commitment.

Again, this is likely a consequence of domestic political pressures. A sizeable bill is unlikely to be well received among the influential pro-Brexit wing of the Conservative Party, and Mrs May’s position remains precarious – a point that was further underscored in the aftermath of her calamitous speech at the Conservative Party conference on 4 October.

The European Council conclusions of 19-20 October are likely to note that while the UK has stated that it will honour its financial obligations taken during its membership, “this has not yet been translated into a firm and concrete commitment from the UK to settle all of these obligations.”

Gradual progress continues on this second point of the negotiations. There remain clear differences between the two sides, but unlike the issue of the Brexit Bill, these differences have been clearly spelled out, and there should be scope for further progress by December.

The role of the European Courts in guaranteeing citizens’ rights continues to be problematic, with the UK still unwilling to accept their jurisdiction beyond the date of full departure (although there have been indications from Prime Minister May that the UK would accept ECJ jurisdiction during a time-limited transition phase).

Nonetheless, the UK has informed the EU of its intention to put in place a simplified procedure which would allow EU citizens to assert their rights. Mr Barnier’s team has committed to study this proposal.

Areas in which the UK and EU positions remain to be bridged continue to include (but are not limited to):

The European Council conclusions are likely to welcome the progress made regarding citizens’ rights and invite the negotiators to build on this “so as to provide the necessary legal certainty and guarantees to all concerned citizens and their family members who shall be able to exercise directly the rights protected by the withdrawal agreement, including through smooth and simple administrative procedures.”

On the Irish issues (upholding the Good Friday Agreement; protecting the Common Travel Area; and avoiding the emergence of a hard border on the island) progress continues and both sides have again indicated their satisfaction with the talks to date.

The October negotiating round also saw further advances in agreeing on the joint principles on the continuation of the Common Travel Area.

The two sides continued their work on mapping out post-Brexit cooperation on the island, but the negotiators acknowledge that there is more work to do in order to build a full picture of the challenges to North-South cooperation resulting from the UK, and therefore Northern Ireland, leaving the EU legal framework.

The sides agreed that the six principles laid out by the EU in September would guide discussions on protecting the Good Friday Agreement. These principles were:

Nonetheless, while the progress is positive, it bears restating that the issue of the border, identified in point 2 above, is pivotal and cannot be resolved until the final trade and customs arrangements between the UK and EU are spelled out in full.

On Ireland, the Council Conclusions of 19-20 October are likely to welcome the progress on convergence on principles and objectives regarding protection of the Good Friday Agreement and maintenance of the Common Travel Area. The conclusions will likely invite the Union negotiator to “pursue further refinement of these principles, taking into account the major challenge that the UK’s withdrawal represents, including as regards avoidance of a hard border, and therefore expecting the UK to present and commit to flexible and imaginative solutions called for by the unique situation of Ireland.”

The lack of progress on the issue of the financial settlement is clearly causing some frustration in Brussels, and led to a debate among Member States this week as to whether the draft European Council conclusions had taken a sufficiently strong stance.

Nonetheless, in anticipation of an opening of the second phase of the negotiations in early 2018, the European Council conclusions are likely to invite the Council, with the Commission negotiators, to begin internal preparatory discussions for the next stage of the talks.

Whether this ambition will be realised in the expected timeframe remains to be seen, but of course the phrase ‘sufficient progress’ is ambiguous, and allows for a certain flexibility in the EU’s position.

The Negotiating Issues: Where they stand

1.The Council conclusions were forwarded in draft format to the Member States after the conclusion of the fifth round of negotiations on 12 October. Information from this draft document is used throughout this blog. However, it should be noted that the final conclusions of the Council may differ from the draft version.