The Conservative Party leadership race in the UK has entered its final stage. This blog notes the backgrounds and positions of the final two candidates, and what the options for a new Prime Minister will be.

The leadership race has already seen the elimination of a number of high-profile candidates, including Dominic Raab, Sajid Javid and Michael Gove, leaving a field of two final contenders – Boris Johnson, former Foreign Secretary, and Jeremy Hunt, Foreign Secretary since 2018.

Upon his election, the new Prime Minister will be faced with the unenviable task of completing the work started by Theresa May and finalising the UK’s withdrawal from the European Union. Faced with a UK Parliament that has rejected the Withdrawal Agreement on three occasions, and a European Union that has repeatedly stated its unwillingness to renegotiate the deal, the path forward for the next leader of the United Kingdom is unclear.

The rules governing how a new party leader is elected are established by the 18-member strong Executive Committee of the Parliamentary group of the Conservative Party, known as the 1922 Committee. As of 2019, each candidate needed eight nominations to run. In the first two ballots, candidates needed to reach a threshold of votes – 16 and 32 respectively – to remain in the race. In each of the three subsequent ballots, the candidate with the lowest number of votes was eliminated.

The two final candidates will now go before the approximately 160,000 Conservative Party members in the UK, who will each be entitled to a postal vote. There will be a hustings across the UK from 22 June, and the new leader of the Tory Party should be in place by 26 July.

This blog will profile each of the remaining candidates, outlining their backgrounds, policy positions and prospects in the process. It will also look at the options for the future Prime Minister in the current political climate.

Who is left in the race?

Following two ballots on Thursday, 21 June 2019, in which Sajid Javid and Michael Gove were eliminated, Boris Johnson and Jeremy Hunt remain in the running. Mr Johnson is the frontrunner, ahead by a substantial 83 votes of Jeremy Hunt who polled 77 in the final ballot.

Below is a short outline of the remaining candidates’ backgrounds and stated positions on the UK’s Withdrawal from the EU.

Results in the leadership race to-date:

Background: Journalism. The Times, The Daily Telegraph. Former Editor of the Spectator.

Brexit Stance: Boris Johnson has been a strong advocate of Leave since the referendum was called. He began his campaign saying that the UK should leave the EU by 31 October 2019 at the latest, implying that he would be prepared to take the UK out of the EU without a deal if necessary.

Deal or no-deal: Boris Johnson voted against the deal in the first two meaningful votes in Parliament, on 15 January 2019 and on 12 March 2019. He voted with the Government on 29 March 2019, when the Prime Minister attempted to get the Withdrawal Agreement through Parliament, promising that she would resign if it were approved. He defied the Party whip and voted against seeking an extension to Article 50 in March 2019.

Key Quote: “The way to get a good deal is to prepare for a no-deal”.

Results in the leadership race to-date:

Key Quote: “If we fight an election before delivering Brexit, we will be annihilated […] I’m the only candidate who has said if we can’t get [a change] then we will leave on WTO terms and I am absolutely committed to making that happen”. 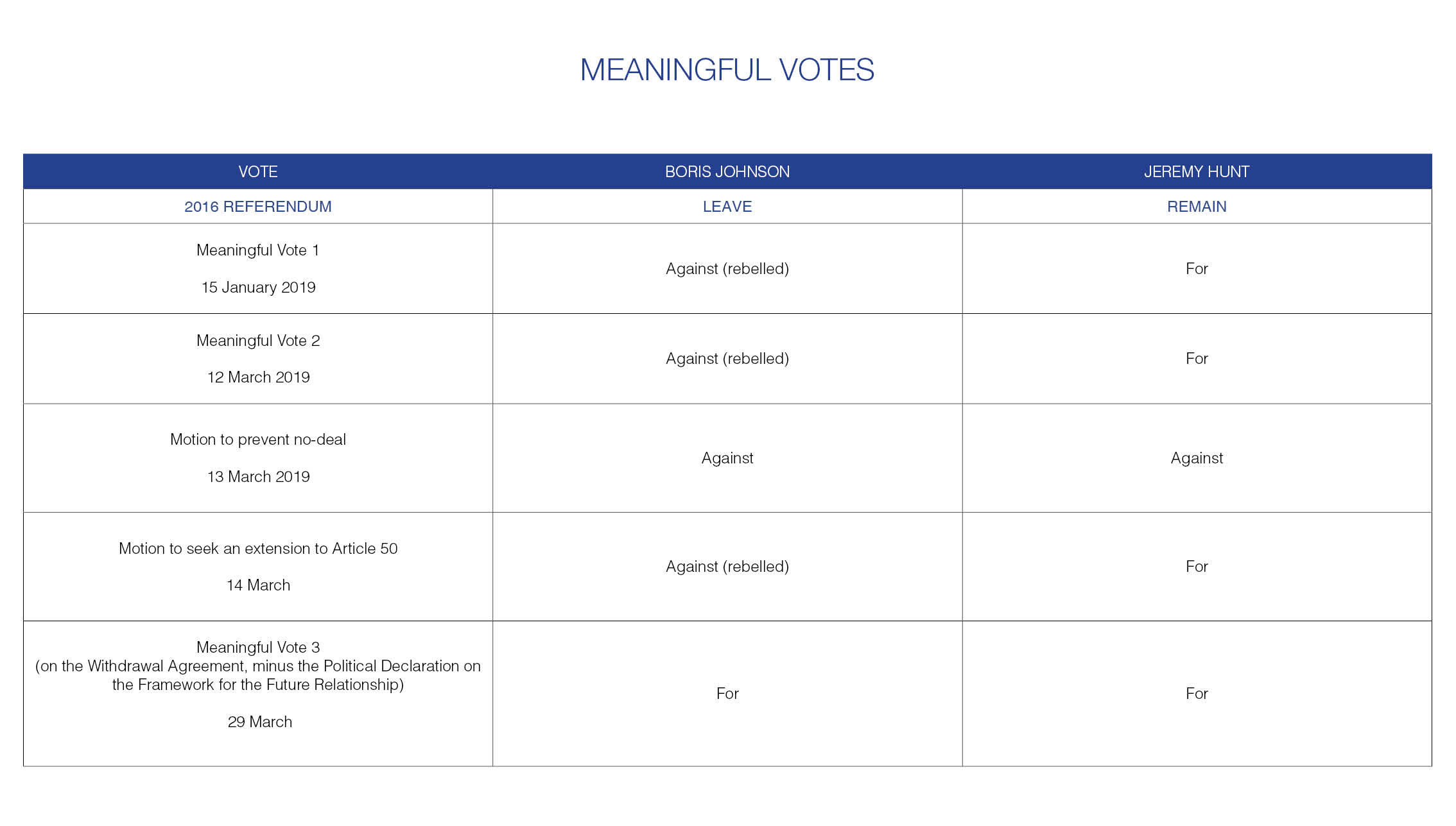 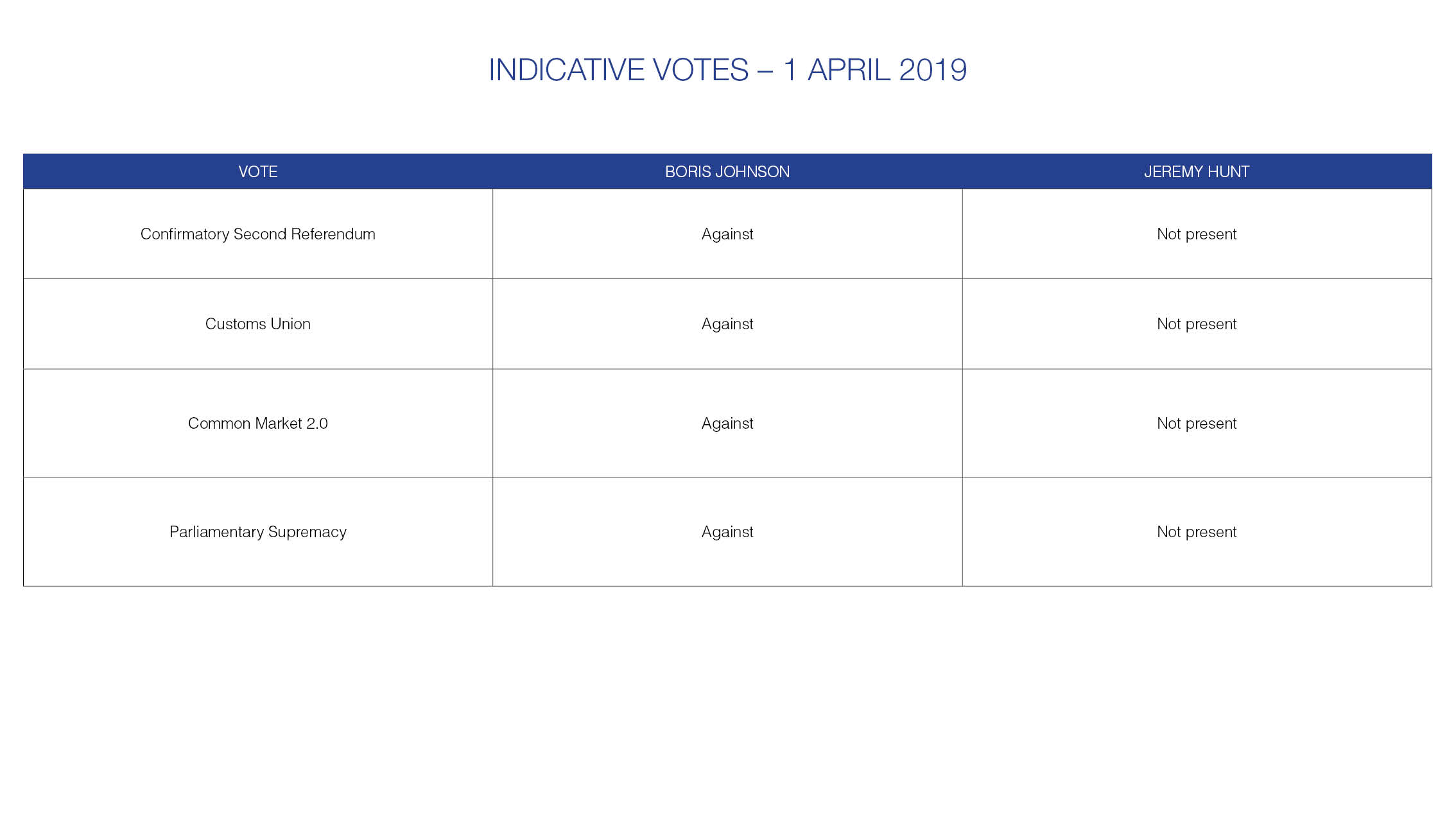 These tables cans be downloaded here and here.

The options for a new Prime Minister are a no-deal exit; passing the current Withdrawal Agreement; Renegotiation; a General Election; and a second referendum.

Both candidates have indicated that they are not afraid of this option. Parliament could attempt to prevent this, but there are a limited number of avenues open to them. One could be to table a motion to oppose no-deal, however, this would be non-binding. Another possibility would be for MPs to legislate against no-deal. Labour attempted to do this on Wednesday, 12 June 2019, in a cross-party effort to rule out a no-deal option for a future Prime Minister. The motion, which was defeated by 11 votes in Parliament, would have allowed MPs to take control of the Parliamentary agenda and facilitate legislation blocking a no-deal exit. This would have included provisions against the option of proroguing Parliament – advising that the Queen formally suspend Parliament – shortly before the 31 October deadline. This measure has been floated by leadership candidates to ensure Brexit automatically takes place on 31 October 2019, whether or not a deal has been approved.

However, even in the event that Parliament legislates against a no-deal exit on 31 October 2019, the UK would still require unanimous agreement in the European Council to extend Article 50.

Only one candidate in the race, Rory Stewart, was open to this option in the campaign, but was eliminated in the third round. It now seems that this is not a politically viable option; there is the further complication that the Speaker of the House of Commons, John Bercow, has previously established that the Government cannot continue to table motions that are not substantially different from motions the House has previously rejected.

Theoretically, and as noted in previous IIEA publications, the new Prime Minister could negotiate changes to the Political Declaration on the Future Relationship with the EU and table a motion approving the Withdrawal Agreement and new Political Declaration. This would probably be accepted by the Speaker.

Both candidates say that they will attempt to renegotiate the Withdrawal Agreement with the European Union, despite the EU having repeatedly ruled this out as an option. In particular, each has said that they will either scrap or renegotiate the controversial Protocol on Northern Ireland, the backstop. The EU has said that it will be possible to re-open the Political Declaration on the Future Relationship to include a commitment to alternative solutions on the backstop – which a future Prime Minister may choose to do. There is, however, already a commitment in the Political Declaration to replace the backstop solution with alternative arrangements, so this has already proved insufficient to garner enough support in the House of Commons.

Although each candidate has ruled out calling a General Election, theoretically, it remains an option, particularly as it might be enough to persuade the European Council to grant a short extension to Article 50 and prevent a no-deal. There must be a two thirds majority in the House of Commons in order to call a General Election, which it would not be difficult to achieve, given that the Labour position is to advocate for an early General Election.

No candidate backed this option in the leadership race, and all have declared themselves undaunted at the prospect of a no-deal exit. The candidates have all promised to deliver on the result of the previous referendum.

It is likely that the new Prime Minister will be in office by 26 July at the latest. This will give him just under 14 weeks until Brexit is due to take place on 31 October. If the summer recess goes ahead, this shortens to about eight weeks.

Among MPs, Boris Johnson proved to be the frontrunner by a considerable distance. However, the voting base has now changed. All Conservative Party members will have a vote on the leader of the Conservative Party, following hustings around the country in the coming month. It is interesting to note that the two contenders have similar viewpoints, though they have evolved differently; Mr Johnson has been a strong advocate for a leave vote since the 2016 referendum and has been consistent in this regard, whereas Mr Hunt voted remain but since changed his position.

Despite some ambitious claims by both contenders regarding the Withdrawal Agreement, in reality the options of a future Prime Minister are limited. Without a significant shift in the UK’s red-lines, the EU is unlikely to have any appetite to reopen the Withdrawal Agreement, particularly on the issue of the backstop. They have, however, said that they will consider changes to the Political Declaration on the Future Relationship.

Neither of the current candidates has ruled out a no-deal exit on 31 October 2019. Parliament could still pass a motion to oppose this, but unless they succeed in legislating for it, this will not be binding. Even in this instance, the UK will need the consent of the EU for an extension if it does not choose to revoke Article 50 or approve the Withdrawal Agreement.

If an extension to Article 50 were sought, it is likely that the European Council would need a clear indication of what the UK Government would do with this time – the possibility of a General Election or a second referendum might be enough to secure an extension from the perspective of the European Council, but it is unclear whether any other circumstances would provide sufficient reason. There is already a sense of exasperation in Brussels and in EU capitals with the prolonged internal debate in the UK over the terms of its exit, and there will be little desire to see the uncertainty continue into 2020, when the European Union will be preoccupied with other pressing matters, not least the critically important negotiations over the next EU budget.