Five years ago, the British Government launched a major review of the impact of EU policies and regulations on British legislation and practices. 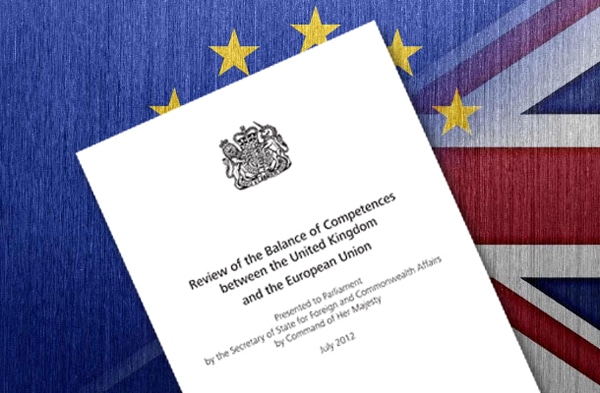 Five years ago, the British Government launched a major review of the impact of EU policies and regulations on British legislation and practices. This was seen as a key element of the evolving UK debate on EU membership which will culminate in the ‘in/out’ referendum on 23 June 2016. It was also seen, in the context of the different approaches to Europe of the two parties in the Tory-Lib Dem coalition Government to be “a means to find some common ground in the detailed evidence as to what stakeholders thought.”[1]

Today it is significant that this initiative does not figure in UK Government discourse on Europe. David Cameron had told his Bloomberg audience that: “People…resent the interference in our national life by what they see as unnecessary rules and regulation.  And they wonder what the point of it all is.”[2] Quite simply, the Review did not produce the results anticipated by its Tory originators, giving rise to thoughts of Conan Doyle’s famous story of the dog that did not bark.

In July 2012, the UK Foreign Secretary, William Hague, formally launched the ‘Review of the Balance of Competences between the United Kingdom and the European Union.’  In his Foreword to the Government Command Paper on the Review, he wrote:

The activities of the EU have expanded over time.  It has steadily acquired influence over many aspects of our daily lives – for better or for worse – without successive governments or the British people being able to take stock of what was happening in the round. Now is the right time to take a critical and constructive look at exactly which competences lie with the EU, which lie with the UK, and whether it works in our national interest.  I want to take stock of the impact of the EU on our country based on a detailed assessment of those things that derive from EU law that affect us in the UK. It will provide a profound analysis of what our membership of the EU means now and for our future.  It will ensure that our national debate is grounded in knowledge of the facts and will be a vital aid for policy making in Government.[3]

The Review was designed to examine all the areas where the Treaties give the EU competence to act, including the provisions in the Treaties giving the EU institutions the power to legislate, to adopt non-legislative acts, or to take any other sort of action. This resulted in as many as 32 sectoral reviews, covering policy areas covered by the European Treaties from Rome to Lisbon – from the Customs Union and Common Commercial Policy to Energy and Sport.

The Review involved collection of objective evidence from interested organisations, companies or persons; analysis of the evidence by civil servants from relevant departments; and, publication with transparent attribution of sources. The Review was not asked for specific recommendations but was intended, according to its terms of reference, to provide a better understanding of the EU aspects of UK governance for Government, Parliament and the British people, and thus a better foundation upon which to develop the UK’s policies in relation to the EU.  It was stated that: “A final decision will be taken closer to the time on how best to draw together the analysis produced during the review in the light of the EU’s rapidly changing situation.”

The sectoral reports were published over the period 2013-2015 in sets of 6-10, the first of these in July 2013, covering Foreign Policy, Development Cooperation, Humanitarian Aid, the Single Market, Taxation, Public Health and Animal Health and Welfare and Food Safety.  The final set, published in December 2014, dealt with Economic and Monetary Policy; Police and Criminal Justice; Information Rights; Education, Vocational Training and Youth; Enlargement; Voting, Consular and Statistics; Subsidiarity and Proportionality.

The overall programme comprised 32 volumes, totalling 3,000 pages of evidence submitted by as many as 1,500 independent individuals and organisations.

An analysis of the first set of reports, by the Brussels-based EPIN Network and the Centre for European Policy Studies (CEPS), concluded that they revealed “no grounds in the assessments of British stakeholders for any large repatriation of competences, nor for further opt-outs,” though it was also noted that desires for better implementation of EU policy could be accommodated.[4]

Following the publication of the final reports, the House of Lords EU Committee produced a comprehensive paper which concluded that the overall exercise – described as ambitious and unprecedented – gave “a fair and neutral assessment of the balance of competences between the EU and the UK.”  However, the Committee made a number of significant criticisms of the Government’s approach to the Review. Notably, in respect of the report on free movement of persons in the Single Market, the Committee wrote: “the undue weight given to evidence reflecting the Government’s own position is a disappointing blemish on the Review as a whole.”

The Committee devoted considerable attention to the decision of the Government not to draw together the major themes of the 32 reports but rather to take the view that each stood on its own merits. This decision was seen to cause concern to many interested parties and the Committee expressed its disappointment at “the Government’s decision to go back on its earlier commitment to draw together the analysis contained in the 32 reports.  The value of the Review in informing public or political debate is undermined by the lack of an overarching assessment.”

The Committee Chairman, Lord Boswell, told The Observer that of the 32 reports there was “no report in which it was demonstrated that too much power resided in Brussels. This was trumpeted as the biggest survey of its kind into the balance of power between the UK and Brussels but, for whatever reason, ministers decided not to present a coherent overall view of the work.”[5] These comments produced predictable reactions, with pro-EU campaigners arguing that the Government was seeking to bury the Review’s clear and uncomfortable findings while Eurosceptic voices, not least in the tabloid media, insisted that the whole exercise was ‘Whitehall whitewash.”

The Competences Review is worthy of comment in the context of the UK referendum debate for a number of reasons.

First, the issue of Competences is of great importance since the Treaty on European Union, in its first Article states that the Member States have established among themselves a European Union on which the Member states confer competences to attain objectives they have in common. It is in this article that the controversial reference to ‘ever closer union’ appears – referring to “a new stage in the process of creating an ever closer union among the peoples of Europe, in which decisions are taken as openly as possible as and as closely as possible to the citizen.”[6]

The question of the extent and impact of EU rules and regulation has been high on the agenda of the Brussels institutions in recent years. Initiatives by the Barroso Commission and the European Parliament on what came to be called ‘smart regulation’ have been followed by the appointment, by Commission President Juncker, of his Vice President, Frans Timmermans, to oversee work on the whole area of EU legislation. VP Timmermans said concern will be “that every single one of the measures that make up the EU’s rulebook is of top quality – as effective, as appropriate, as operational, as up to date, as simple as possible.”[7]

A similar exercise by the Government of the Netherlands, in 2013, concluded with a list of areas in which “the EU should exercise more restraint” and with an insistence on the important principle of proportionality. It concluded, notably, that the objective should be the creation of “a European Union that is more modest, more sober and at the same time more effective.”[8]

Although effectively ‘side-lined’ by Government the Competences Review has been rightly described as being “in the finest tradition of British pragmatism – a much needed injection of common sense and seriousness into the British debate on Europe.”[9]

[3] Review of the Balance of Competences between the United Kingdom and the European Union.   Command Paper (Cm 8415), July 2012.

[6] Treaty on the Functioning of the European Union