Following the recent Scottish and Welsh elections, this blog assesses the future of East-West and EU-UK relations considering the return of both Nicola Sturgeon and Mark Drakeford to power. 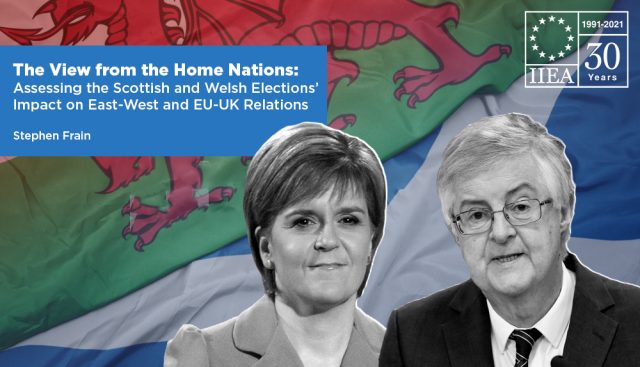 The Scottish Parliament and Senedd Cymru (Welsh Parliament) elections took place on Thursday, 6 May 2021. In Scotland, the Scottish Nationalist Party (SNP) claimed an unprecedented fourth consecutive electoral success. Meanwhile, in Wales, Welsh Labour retained power of the Senedd yet again, as they have ever since its establishment in 1999, but this time regaining a working majority. The return of Nicola Sturgeon and Mark Drakeford as First Ministers of Scotland and Wales respectively will play a pivotal role in charting the trajectory of East-West relations between Ireland and both devolved administrations, as well as Ireland-UK relations more broadly. Meanwhile, both leaders’ vision for their nations and the UK’s relationship with the EU is set to influence not only EU-UK ties, but may also have implications for the constitutional stability of the UK itself.

Ensuring continued East-West communication and cooperation is a key issue in Ireland’s bilateral relationship with the United Kingdom. Strand Three of the Good Friday Agreement which established the existing framework of East-West relations, was never envisaged to be exclusively in the remit of Dublin and London, but rather embraced “the totality of relationships”. The key institution in this respect has been the British-Irish Council, an intergovernmental forum which brings together representatives of the British and Irish Governments as well as those from the devolved governments of Scotland, Wales, Northern Ireland, and the Crown Dependencies of the Isle of Man, Jersey and Guernsey. The Good Friday Agreement and the British-Irish Council, however, were designed when both the UK and Ireland were members of the EU. The UK’s withdrawal from the EU has prompted Ireland to deepen its engagement with the UK at a devolved level. This was an objective of Ireland’s 2018 foreign policy white paper, Global Ireland. On Thursday, 14 January 2021, Irish Minister for Foreign Affairs, Simon Coveney and then Scottish Cabinet Secretary for External Affairs, Michael Russell, launched the Ireland-Scotland Joint Bilateral Review: Report and Recommendations 2021-2025. On Monday, 1 March 2021, Minister Coveney and First Minister Drakeford launched the Ireland-Wales Shared Statement and Joint Action Plan 2021-2025. The electoral successes of the SNP and Welsh Labour will mean that they may have the opportunity to implement these new visions for East-West relations.

A major issue arising in both the Scottish and Welsh election campaigns was each nation’s envisaged relationship with Europe post-Brexit. The UK’s withdrawal from the EU has caused the question of independence to resurface in Scotland. Both the SNP and the Scottish Greens campaigned on seeking EU membership for an independent Scotland. They now command the largest pro-independence majority in the history of the modern Scottish Parliament. Meanwhile, outside the EU, following from the Second Sturgeon Government’s strategy paper, The European Union’s Strategic Agenda 2020-2024: Scotland’s Perspective, the SNP and Scotland envisage a close working relationship with the EU and a number of shared priorities including in the fields of: democracy promotion; the climate emergency; societal well-being; and smart technologies.

In Wales, Adam Price, leader of Plaid Cymru, which campaigned on a pro-independence platform, argued that an independent Wales could be best placed if they sought EFTA membership. Ultimately though, their predicted success outside of their North West and Mid Wales heartlands never materialised. Welsh Labour, who ultimately prevailed, promised in their manifesto to make the case for “the closest possible economic relationship with the EU, whilst respecting the EU referendum result”.

Regional cooperation is a fundamental pillar of Ireland’s relationships with both Scotland and Wales. Ireland and Scotland previously shared best practices as part of the EU’s Smart Islands Initiative. The Bilateral Review acknowledges the challenges posed by Brexit and COVID-19 to this strand of Irish-Scottish relations but presents recommendations to maintain and develop cooperation. These include intensified exchanges on agriculture, marine and forestry policies with a view to creating a sustainable and green recovery post-pandemic. The Irish Government recently published Our Rural Future – Rural Development Policy 2021-2025 while the SNP manifesto pledged to fund rural economy development. Both sides’ renewed focus on their rural regions allows for enhanced best practice exchange in line with the Review’s recommendations.

First Minister Drakeford has long been an advocate for Irish-Welsh regional cooperation. As Cabinet Secretary for Finance, he stressed the importance of continuing the Ireland-Wales Programme post-Brexit. Part of the EU’s cohesion policy, it brings regions of Wales and Ireland together to address economic, environmental, and social challenges, for example, climate adaptation and coastal community development around the Irish Sea. The Withdrawal Agreement allowed for the continuation of such European Territorial Cooperation Programmes in the current funding period butthe UK opted out of plans for future cooperation. First Minister Drakeford’s re-election adds impetus to the case for findings ways to continue such cooperation in some shape or form.

Another avenue for maintaining relations post-Brexit is through intensifying official contacts. Wales sees it as an opportunity to spur collaboration. The Joint Action Plan promises to increase the number of Taoiseach-First Minister high-level meetings. It sets out plans to convene an Ireland-Wales Forum, bringing together Ministers and stakeholders from both jurisdictions. Welsh Labour also promised to create a European Envoy for Wales to be a voice for Welsh interests in Brussels. Scotland and Ireland also have the opportunity to engage in summitry. The Bilateral Review hopes to build on expert-level experiences such as the Creative Cities Summit and the Scottish-Irish Health Forum.

The SNP’s continued control of Holyrood allows them to build their reputation as a global actor through cooperation with European partners. Scotland sees Glasgow’s COP26 as a major opportunity to demonstrate Scottish climate leadership. Whilst it is the UK, not Scotland, who has a seat at the negotiation table, the environment is a devolved matter in Scotland. This means that environmental policy is legislated by the Scottish Parliament rather than Westminster. Given Scotland’s European co-chairpersonship of the Under2 Alliance, a global coalition of subnational governments mitigating against CO2 emissions, combined with cooperation with the EU on the climate emergency, Scotland is uniquely placed to drive international climate action at a regional level.

Scotland and Wales are also committed to achieving the UN’s Sustainable Development Goals (SDGs). The return of First Ministers Sturgeon and Drakeford allows them to continue SDG collaboration with Ireland. The Bilateral Review envisages best practice exchanges between Ireland and Scotland with respect to the gender equality, climate action and the humanitarian need policies of Ireland’s A Better World development strategy. The Joint Action Plan also provides for international development cooperation. It conceptualises the SDGs as the framework for Ireland and Wales to work together in this area.

Ireland can broadly welcome the return of First Ministers Sturgeon and Drakeford in the sense that their continuation in power brings stability to East-West relations. Their desire for intensified contacts with Ireland post-Brexit comes at a much-needed time given the need for cooperation at all levels in light of tensions in Northern Ireland. Their presence at the forthcoming British-Irish Council has the potential to help efforts to restore trust and goodwill between both sides.

However, in the broader context of EU-UK relations, such stability is not guaranteed in the long-term. In the aftermath of her victory, First Minister Sturgeon made clear that she intends to legislate for an independence referendum within the lifetime of the new Government. This would require the SNP overcoming constitutional hurdles and potential challenges from London. Should it ultimately come to pass however, the SNP have promised that it would seek EU membership for an independent Scotland, which would create significant implications for the EU’s relationship with the UK. Moreover, the UK would be left sizeably diminished as a global actor. Whilst the UK has withdrawn from the EU, both the EU and UK still share many of the same geopolitical and foreign policy interests and challenges on the global stage. Constitutional instability within the British Union has the power to undermine this.

The composition of the Scottish Holyrood parliament and Welsh Senedd are markedly distinct from the current composure of the British House of Commons. It serves as a reminder of the increased importance of the devolved administrations in the UK’s interactions with Ireland, the EU and the wider world. Whilst the First Ministers of Scotland and Wales will not change, their roles may become much more significant in the coming years.