On 17 January 2017, Prime Minister Theresa May delivered a long-awaited speech outlining the principles and objectives that would guide the UK's EU withdrawal. 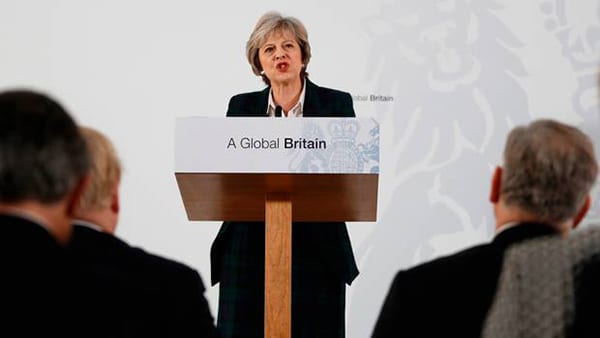 On 17 January 2017, Prime Minister Theresa May delivered a long-awaited speech outlining the principles and objectives that would guide the UK’s EU withdrawal.

The Prime Minister’s speech drew together much of what was already known or assumed about the UK’s likely negotiating stance, but provided important confirmation on a number of key points, including that the UK would:

·      not be a full member of the Customs Union, but will seek a “frictionless” trade environment with the EU; and

Of importance for Ireland, Ms May acknowledged the importance of the Common Travel Area and committed to find a way to maintain the agreement after the UK’s withdrawal from the EU.

Reaction to Ms May’s speech has been mixed. Close to home, the speech, which included as an objective “strengthening the union between the four nations of the United Kingdom” was promptly met with calls for another Scottish Independence referendum. In Northern Ireland, meanwhile, Sinn Fein accused Ms May of damaging bilateral relations by demanding terms that they believe will result in the reimposition of border controls on the island of Ireland.

In the rest of the EU, the institutions and some Member States cautiously welcomed the added clarity, particularly on the issue of the Single Market. Statements by heads of all the EU institutions in recent months made it clear that any attempt to gain Single Market access while also limiting free movement of EU citizens would have been fruitless, and almost certainly have caused acrimony in the negotiations.

An IIEA summary of Ms May’s 12 objectives for the negotiations can be found here. Ms May’s speech is less a plan for Brexit, however, and more a framework for a plan. Her comments leave much to be resolved. Granular details not mentioned by Ms May but which will have to be discussed in the coming months include:

·      the closure and re-location of EU agencies currently based in the UK, such as the European Banking Authority

·      future relationships with EU agencies which up to now have played a role in UK domestic law, such as the European Medicines Agency

·      transfer of regulatory responsibilities from EU bodies to the UK

·      the process and timeframes for any ‘phased’ transitional arrangements.

That is not even to mention the arrangements for the future relationship, which may be negotiated in parallel to the withdrawal negotiation – though there is still some disagreement on the sequencing of this. These will include:

·      what manner of trading arrangement the UK will have with the EU;

·      what UK sectors, if any, may obtain preferential access to the EU market;

·      what financial contributions the UK may make to the EU budget, if any;

·      what extent the UK will need to adhere to EU regulations, where necessary for cross-border operations (eg banking and financial regulations, data protection and privacy legislation)

Previous IIEA policy briefs have provided more detailed analysis of these three areas and their combined impact on relations between the UK and Ireland, particularly with respect to Northern Ireland. In short, these three elements are crucial to the prosperous bi-lateral trading relationship and for the free movement of goods and people on the island of Ireland.

Ms May’s comments on the Common Travel Area between the UK and Ireland – essentially a commitment to try to maintain the agreement post-Brexit – are encouraging, and precisely mirror statements by the Irish Government since the referendum. The practical details of how this can be resolved, however, are far from clear. It is possible that some reciprocal rights of Irish and UK citizens can be cemented in bilateral agreements between the two countries, but the European dimension of this cannot be ignored. It is true that the CTA existed long before EU membership, but there is neither a precedent nor a framework for it to exist half-in and half-out of the EU.

If the UK had sought Single Market access and was willing to accept free movement of people, the current arrangements would continue largely uninterrupted. But the clean break Ms May proposes means that the border with Northern Ireland inevitably becomes the external border of the EU with a non-associated state. Such external borders are enforced without exception. Adding further difficulty, is Ms May’s restatement of the UK’s intention to tightly control immigration.

How to square these positions with the seemingly contradictory desire to avoid intrusive controls on movement of people on the island of Ireland is unclear, but there are grounds for optimism are, perhaps, space for creative solutions.

On the other hand, Ms May’s comments on the Customs Union, which has removed customs posts on the island of Ireland and allowed goods to move across the Northern Irish border uninhibited, will raise Irish concerns. The UK’s plans in this respect are distinctly ill-defined, and may ultimately be difficult to reconcile with the EU’s rules. It is clear that the UK will have no part of the Common Commercial Policy (CCP), which mandates that the EU negotiates new trade deals as a single bloc, nor the Common External Tariff. However, these are indivisible aspects of Customs Union membership, and it is profoundly unclear how the UK government intends to reconcile this with its desire for a ‘frictionless’ trade environment.

A third-country customs agreement, or associate membership of the customs union, without either a common external tariff or an obligation to adhere to the CCP, would be unprecedented, and problematic in practice for the EU. On the other hand, failure to find an agreement, even on a transitional basis, would result in the near certain return of customs controls on the Northern Irish border. The customs issue has repeatedly been flagged by the IIEA and others as arguably the most intractable of the issues facing Ireland and the UK in the negotiations. Unfortunately Ms May’s speech does little to dispel those concerns.

The Customs Union established, in principle, the free movement of goods in the EU, but the Single Market goes much further. It defines the EU as one territory without internal borders or any other obstacles to the free movement of (i) goods, (ii) capital, (iii) services and (iv) people. Single Market regulation is the foundation of much of Ireland’s trade with the UK, and Brexit will create barriers for Irish business in a range of sectors wishing to do business with and in the UK. This will be true both in the short term, due to the emergence of additional costs and non-tariff barriers, and in the long-term, with the possibility of regulatory divergence between the UK and the EU becoming more likely over time. The UK can certainly negotiate preferential access to the market as part of future trade agreements, but no future deal will be as comprehensive as the present arrangements.

There will also be opportunities for Ireland, however, and UK companies reliant on Single Market access, or multinationals seeking the same, may now be firmly looking to Dublin and other EU capitals as an attractive alternative for investment. Similar legal systems, culture and language will play in Dublin’s favour, but swift policy decisions aimed at maximising Ireland’s capacity in terms of housing, schools, office space and transport will be necessary to take advantage of these opportunities and offset some of the economic negatives of the UK’s departure.

As noted, there are many issues still to be clarified in the coming months, and neither the EU nor the UK will expect an easy negotiation, something which Ms May alluded to in her comments regarding possible ‘competitive tax rates’ in the post-Brexit UK – a clear message to the EU that the UK will not accept a punitive deal, and will not readily give up its status as one of Europe’s largest attractors of FDI.

The lingering possibility of acrimonious negotiations underscores the need for Ireland to ensure that its unique concerns, in particular with respect to Northern Ireland, are understood to require unique consideration. Ideally, these would be compartmentalised and dealt with up front in the negotiations, in case they unravel or are unpicked in the face of difficult discussions.

In the sea of uncertainty that is Brexit, Theresa May’s speech represents, at last, a small island of certainty. Not all aspects of this new certainty will be welcome news for Ireland, but if nothing else it allows policymakers and social and business leaders to begin planning concrete responses to buttress Ireland against the negative effects of Brexit.