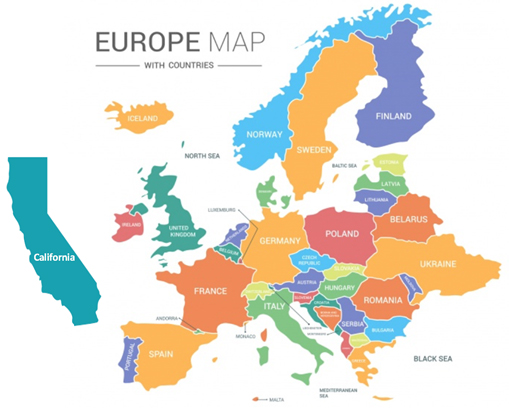 California has become a global leader on climate change. Between 10 and 12 September 2018, it hosted the Global Climate Action Summit, which brought together cities, states, regions and business from around to “take ambition to the next level”. More importantly, its Governor, Jerry Brown, was sending a powerful signal to the world that California and its many American partners would resist the Trump Administration’s climate policy rollbacks. The good climate vibes were well received around the world, not least by Chinese President Xi Jinping and the EU’s climate commissioner, Miguel Arias Cañete, both of whom attended.

With the eyes of the world on California, it did not disappoint. Governor Brown signed into law a target to get 100% of its electricity from “clean sources” by 2045 (half of electricity must come from renewables by 2026, and 60% by 2030). He also signed a politically symbolic executive order committing California to economy-wide carbon neutrality by 2045.

In climate ambition and solutions, California and the EU are bedfellows. California’s objective—a 40% emissions reductions by 2030—is exactly the same as the EU’s Paris Agreement pledge (although, as we discuss below, California’s pledge is actually far more ambitious). California and the EU both measure this commitment against a 1990 baseline. By contrast the US Federal Government uses 2005 as its preferred baseline (1990 makes the EU look better, 2005 makes the US look better). Even California’s new carbon neutrality objective  mirrors exactly a Swedish law agreed in 2017.

There are many other similarities. California has operated a cap and trade scheme since early 2012, which requires heavy industrial and power-sector companies to acquire emissions credits to pollute. The EU established a similar scheme in 2005 (although a major difference is that the Californian scheme includes the transport sector). California has prioritised the efficient use of energy since the late 1970s, and energy efficiency is also a key priority for the EU. California is fighting to keep Obama-era fuel efficiency standards in place in the face of federal rollbacks, and the EU is also dramatically ramping up its own efficiency standards for vehicles in the period to 2030.

If we look back to the 1990 baseline, and compare California’s performance, we can see that its 2016 emissions were about the same as they were in 1990. By contrast the EU’s emissions were 22% below 1990 levels (although emissions from Ireland, the perennial climate laggard, were 13% above 1990 levels!) (Fig 1). 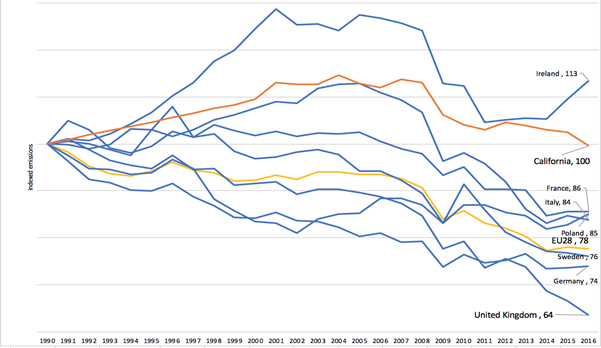 But it is important to take population growth into account also. After all, California’s population exploded from approximately 30 to 40 million between 1990 and 2016. Looking at emissions per person reveals that Californians have about half the carbon footprint of the average American, although it is still considerably above the EU average. On the other hand, if we compared two economic powerhouses who self-identify as climate leaders – California and Germany – we can see that their denizens have comparable footprints, although Californians marginally retain bragging rights here (Fig 2). 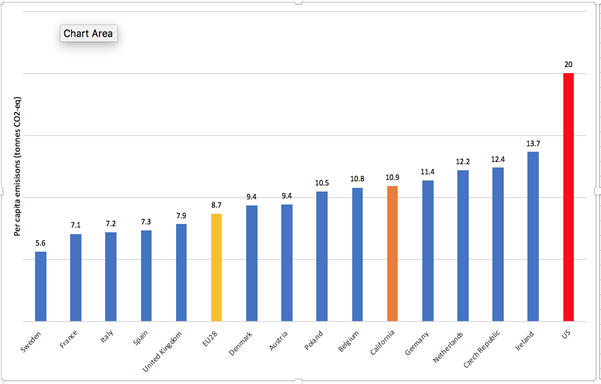 Another important consideration is how carbon footprints have changed between 1990 and 2016. We can see that both the EU and California have seen a significant drop in per-capita emissions, although California’s starting point was significantly higher. The absolute decline was almost identical (3.5 t/CO2-eq for Californians and 3.3/CO2-eq for the average European), but the EU relative reduction was 28% compared to 24% for the average Californian (Fig 3). It really depends how you want to look at it. 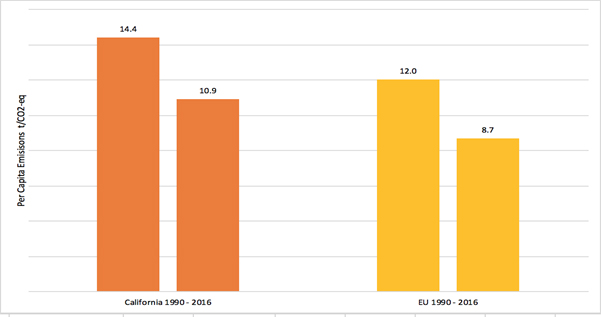 Finally, Californians might also suggest that we should consider their dynamic economic performance. After all, not only the population exploded, but the economy has also boomed in recent years. When we look at the amount of economic activity per tonne of C02-eq in 2016, we can see that on this metric California far surpassed the EU average, and is comparable with the best performers—the Swedes and the Danes (Ireland also looks respectable by this metric but GDP figures significantly exaggerate national wealth). This metric points to the huge success of California’s tech sector, but also its ability to decouple economic growth from emissions. 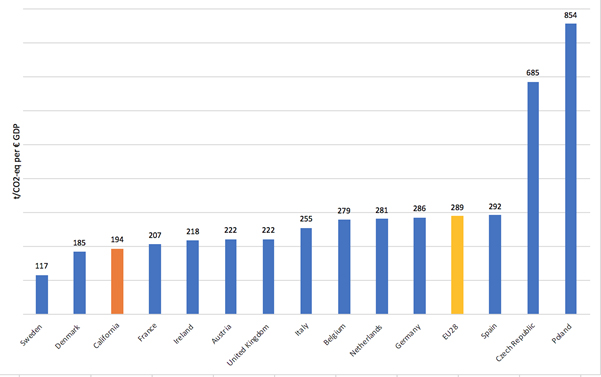 Within an American context, California’s climate performance is exceptional. It has often managed to lead in spite of rather than because of federal policy, whereas EU Member States are largely supported and encouraged by the European Commission and European Parliament. These comparisons also illustrate that the EU achieved rapid decarbonisation, particularly between 1990 and 2010, but California’s performance has been gathering momentum over the past decade.

These considerations underline just how ambitions California’s climate objectives are—while the EU is already more than half way to meeting its 2030 target, California must achieve the full 40% reduction in just 12 years. To achieve this target emissions must be reduced by approximately 3% per annum, compared to an annual reduction of 1.6% in the EU. 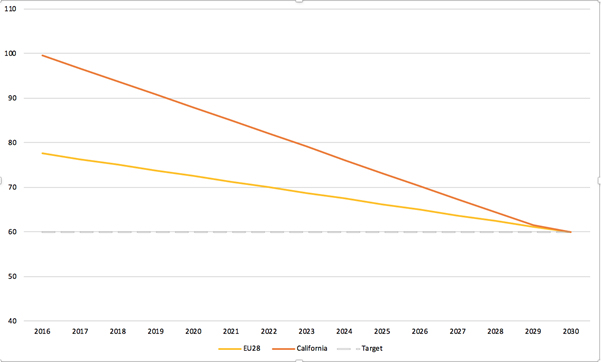 While the EU has achieved more rapid decarbonisation over the past two decades, California is therefore rapidly catching up, and looks set to overtake the EU in the decade ahead. When it comes to climate policy at least, California would fit right in as the EU’s 29th Member State.