The basic imperative to reduce emissions is easily understood.

How much of Ireland’s “fiscal space” will climate inaction consume?

The basic imperative to reduce emissions is easily understood.  In each successive month from March 2015 to July 2016, the previous highest global temperature for that month was broken. July 2016 was the warmest of any month on record in the period of historic measurement. Given this record goes back roughly 160 years, the odds of this occurring without man’s input in the form of greenhouse gas emissions is infinitesimally small.

Reducing emissions is a political challenge that is difficult to grapple with in Ireland, as in many other countries. In welcome developments, we now have a Government Department with “Climate Action” in its title, and the newly established Citizens’ Assembly, which has been given the goal of exploring “how the State can make Ireland a leader in tackling climate change”.

But on the ground, there are few examples of “action” and “leadership” to draw upon. There has been no plan to reduce emissions since the previous strategy expired 4 years ago. As we can see from the EPA’s latest inventory report, since the end of the recession in 2011 Irish emissions have more or less flat lined. In fact, emissions probably increased in 2015 (although EPA data have not yet been published) and are projected to continue increasing in the years ahead. 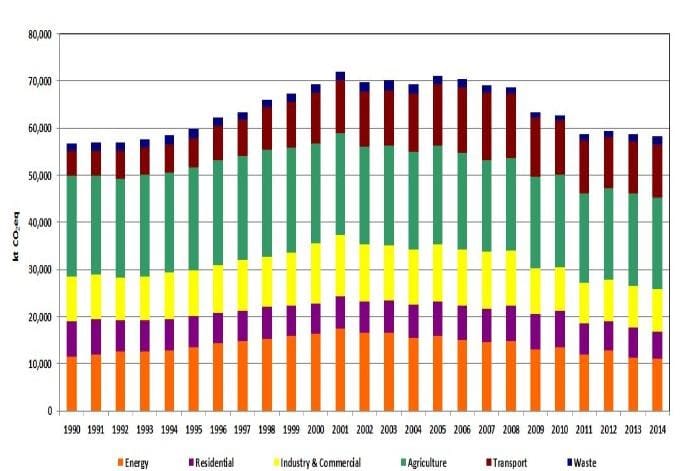 Leaving aside the moral case for wealthy counties such as Ireland to take action (which is persuasive), this blog will focus on estimating the cost implications of inaction for the Irish taxpayer by 2030. This is a particularly pertinent question within the context of the EU’s fiscal rules and the so-called “fiscal space” within which Ireland must now operate. More money spent on emissions permits and fines means less money for tax cuts, schools, hospitals or for meeting other social policy objectives.

Given the focus on the taxpayer, the blog will focus on emissions not covered by the EU Emissions Trading Scheme (EU ETS), as this is the proportion of Ireland’s emissions that Government is accountable for reducing. Agriculture is responsible for the largest share (42%), followed by transport and heat use in buildings.[1]

As can be seen from the graphic below, Ireland’s emissions from these sectors must decline to 39 million tones by 2020, 20% below the 2005 baseline.

However the recession in the earlier years of the target meant that over-compliance was achieved in both 2013 and 2014. This surplus can be banked and offset against emissions in the future years up to 2020. 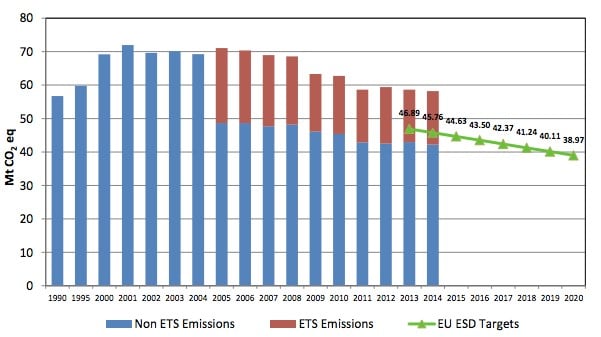 While this looks encouraging, since the economy has begun to recover, the trend is being reversed. The EPA are projecting that Ireland’s cumulative shortfall will be in the region of 12 million tonnes CO2 by 2020.[2]

Each year a Member State is entitled to use offsets (these are cheap carbon credits bough from outside the EU), up to the equivalent of 3% of its 2005 non-ETS emissions. This proportion of compliance to the targets should be rather cheap. In order to bridge the remaining gap, the Government will seek to purchase unused entitlements from other Member States (which is permitted under the EU law) by way of bi-lateral agreements.

An average (low) cost of between €5 and €10 per tonne CO2 might be expected for permits from these sources, resulting in an overall compliance cost perhaps in the region of between €60 and €120 million. This estimate tallies with the Department of Environment, Community and Local Government’s (DECLG) estimate of “in the region” of €90 million. [3]

It should be noted, however, that in the period to 2020, Ireland must also meet a legally binging target for renewables. According to SEAI data published last week, renewable power supplied 9% of Gross Final Energy Consumption in 2015 compared with a target of 16% for 2020. Based on a realistic (linear) and a more optimistic (exponential) extrapolation of the trend, an overall shortfall of between 1.2 and 3.5% might be anticipated. 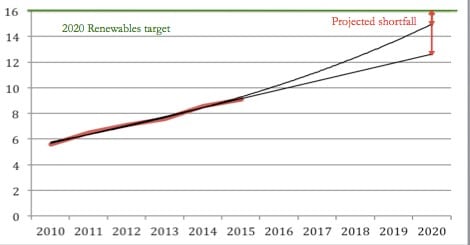 While it is difficult to ascertain how much this might cost the exchequer because, again, compliance must be purchased bi-laterally from countries that exceed their target, the (former) DCENR estimated that every 1% shortfall could cost to the exchequer circa €140m. [4] This means the exchequer could be facing a bill of between €168 and €490 in total.

Moving beyond 2020, the Commission proposed emissions targets for Member States in July 2016, so it is now possible to estimate the potential costs of inaction to 2030 (renewables targets will no longer be legally binding so these are not considered below).

As previously noted here, Ireland’s deal is beyond the best-case scenario that might have been expected. The headline 30% reduction target for 2030 was anticipated,[5] as indeed might have been the flexibilities allowed. Within proscribed limits, Ireland may purchase a small amount of ETS credits and plant forestry for compliance).

Surprisingly, however, the Commission is proposing that Ireland’s post-2020 compliance targets will not continue on from the 2012-2020 trajectory. As can be seen from Fig 4 our proposed 2021 target means that emissions are permitted to be 9 million tonnes higher compared to 2020 if the impact of the flexibilities is considered (I call this the Harry Potter proposal).

Notwithstanding this lucky break,[6] the scale of the challenge facing Ireland is still surprisingly daunting. To assess total compliance costs facing the exchequer (in a “no action” scenario), one must first estimate the cost of flexibilities (2 in the Fig 5 below). This is the cost of purchasing permits on the EU ETS post-2020 and the cost of planting forestry. Second, one must estimate the additional cost of residual non-compliance (1 in Fig 5 below).

Fig 5. Pre and post-2020 targets compared to emissions and projections

Teagasc have estimated that forestry costs the exchequer €26 and €42 per tonne of carbon sequestered,[7] while the price of EU ETS credits is projected to be between €18-€26 per from 2020-2030.[8] We therefore use a low value of €18 and a high value of €42 for flexibilities (for illustrative purposes).

On this basis, the combined 2020 and 2030 potential costs of climate inaction are given in Table 1 below.

Table 1. Proportion of Fiscal Space Allocated to Climate Targets in No Action Scenarios

Between circa €3 and €6 billion is therefore estimated, but it should be noted that this is not a prediction. These scenarios assume that no further actions are taken to reduce emissions between now and 2030. In reality, this is highly unlikely.

While a full assessment of the economics of climate action is beyond the scope of this analysis, measures (pubic transport investment, cycle lanes, non-diesel busses and other low-emissions vehicles, optimising land use for climate smart agriculture, retrofitting homes, offices and public buildings, renewable heating, phasing out peat/coal and investing in PV and wind, etc.) would largely boost the domestic economy. In most cases, what is required is not new exchequer resources, but the recalibration of incentives and re-allocation of existing resources.

The purpose here is not to point to looming fiscal catastrophe. Rather it is to underline the need for a more proactive approach to reducing emissions, particularly from agriculture, buildings and transport. With an economy and greenhouse gas emissions that are once again growing fast, this is a particularly important policy consideration.

Joseph Curtin is Climate Policy Research Fellow at IIEA and UCC, and a Member of Ireland’s Climate Change Advisory Council. Any opinions expressed are personal.

[1] Government is not responsible for compliance costs for installations covered by the EU ETS. In fact part of the revenue from the sale/auctioning of carbon permits accrues to Government.

[5] The IIEA’s estimates are included on page 34 of this report from June 2016: https://historyiiea.com/ftp/Publications/IIEA_CSA%20Leadership%20Forum%20Final%20Report_Digital%20Version.pdf

[6] The Commission is proposing that the target is based on emissions between 2016 and 2018. This is positive for Ireland because our target will be below emissions, but for most member states emissions are below their target, so this has the opposite effect. The reasons for this resetting of the baseline are nothing to do with Ireland, so in a sense Ireland got lucky.