The European Commission re-launched its proposals regarding a Common Consolidated Corporate Tax Base (CCCTB) in October 2016. 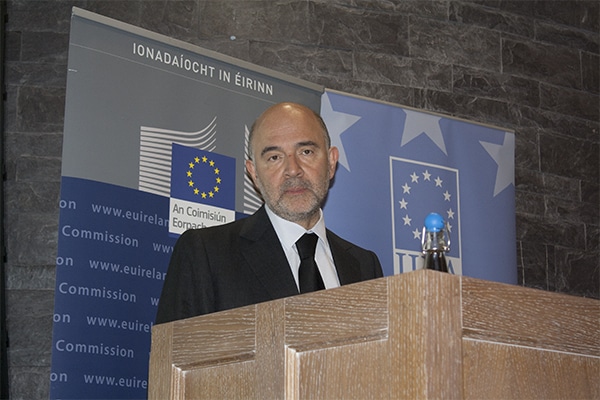 The European Commission re-launched its proposals regarding a Common Consolidated Corporate Tax Base (CCCTB) in October 2016. The original CCCTB proposals, put forward by the Commission in 2011, did not meet with agreement by Member States. The latest proposals have thus far generated renewed opposition from a number of countries concerned about the implications of CCCTB for their tax sovereignty and for their corporate tax revenues.

The Commission reintroduced the contentious corporate tax plans as part of its focus on growth, jobs and investment, and as a response to the aggressive tax practices of large multinational companies operating across numerous EU Member States. It argues that tax avoidance efforts by such firms are aided by the interaction between divergent tax systems, and specifically differing national corporate taxation rules. The Commission asserts that its new CCCTB proposal would  level the playing field between multinational companies and their domestic counterparts, in addition to serving to “enhance general tax payer morale” by challenging the public perception that large multinationals are paying little or no taxation[1].

The Commission has proposed the introduction of a single set of rules to decide how much of a company’s profit should be taxed in the EU once income deductions and exemptions have been accounted for. Such an arrangement would allow companies to do a single calculation on the basis of one set of tax rules rather than multiple calculations on the basis of tax rules in each of the Member States in which the company in question operates and is taxable. The proposed CCCTB would be mandatory for companies with global consolidated revenues of more than €750 million.

A company’s tax would be calculated by adding up the profits and losses that it has accrued across the Member States in which it is taxable. The resulting net profit or loss figure would then be used to calculate the company’s consolidated tax base, which would be “shared out” between the appropriate Member States using an apportionment formula. This formula would focus on three equally weighted factors when establishing the proportion of a company’s tax base that a Member State can tax. These factors would be:

Member States would tax their share of the profits at the appropriate national rate – the Commission says that this aspect of the CCCTB ensures that Member States can continue to set their own corporation tax rate “as is their sovereign right”.

1.      Single set of rules to ensure uniform calculation of corporate tax across the EU

1.      Use the Common Base rules to calculate a company’s total taxable profits after adding up the profits and losses of its cross-border constituent companies.

2.      Share out the total taxable profits of the company in question between the Member States in which it operates.

3.      Calculate the share of the Member States by using the apportionment formula.

4.      Member States then tax their share at the national corporate tax rate.

There would also be an R&D incentive and an Allowance for Growth and Investment (AGI) within the proposed CCCTB. The R&D incentive would allow companies to deduct the full costs of its R&D in a given year from its taxable income, plus an additional 50% deduction will be applied to R&D investment above €20m and a 25% deduction for spending above €20m. Separately, the AGI would seek to redress the debt bias in national taxation systems by granting a tax deduction to companies that opt for equity financing over debt financing.

The Commission envisages that Member States would agree the common base aspect of the CCCTB first, before moving on to the consolidation aspect, which it accepts is “more complex”. It believes that the common base could be applied before any agreement is reached on consolidation.

It argues that the CCCTB should help combat tax avoidance in the EU by eliminating loopholes between national systems and increasing the transparency on the effective tax rate of individual Member States. The proposed measures should benefit companies operating in more than one Member State as it would provide them with greater clarity and legal certainty on corporate taxation in the EU, while also reducing administrative burdens and compliance costs. In the Commission’s view, the CCCTB should also advance efforts to boost jobs, growth and investment in the EU through the R&D incentive and the AGI measure outlined above.

The renewed CCCTB proposals were the main topic of discussion during Commissioner Pierre Moscovici’s visit to Dublin on 24 January 2017. Mr Moscovici, the European Commissioner for Economic and Financial Affairs, Taxation and Customs, discussed the issue at an Irish Times conference on taxation and at a meeting of the Oireachtas Finance Committee. Commissioner Moscovici insisted that the CCCTB would benefit Ireland and urged critics to take “a fresh look” at the Commission’s proposals, which he said he believed would make Ireland more, not less, attractive as a foreign investment destination.

Opposition to the CCCTB

The CCCTB is potentially disadvantageous for Ireland[2] and other Member States with small, open economies, particularly due to the use of sales in the apportionment formula that would be used to calculate a company’s consolidated tax base. In Member States where multinational companies produce products for export, such a formula would reduce the amount of income available for taxation[3]. Research published by the ESRI in December 2016 estimated that the CCCTB would reduce overall FDI flows to Ireland by 4.6% and reduce the country’s corporation tax revenues by 5.7%. Total FDI flows into the EU would fall 1.1%, while corporation tax revenues for the EU as a whole would increase by a mere 0.2%.

The establishment of the CCCTB requires unanimous agreement among Member States. National parliaments in Ireland, Sweden, Denmark, Malta, Luxembourg and Denmark have raised formal objections to the plans. However, not enough national parliaments lodged objections to the plans by the deadline of 3 January 2017 for the invocation of the ‘yellow card’ procedure on subsidiarity – this would have required the Commission to review its proposals. Under the principle of subsidiarity, in areas outside of its exclusive competence the EU is bound to act “only if and in so far as the objectives of the proposed action cannot be sufficiently achieved” by Member States.

Michael Noonan, the Minister of Finance, said on 24 February 2017 that the proposed CCCTB rules would require Ireland to choose between its three rates of corporation tax (12.5% for trading profits, 25% for non-trading profits and 33% for capital gains). “This is not acceptable to Ireland” and would impinge of the sovereign competence of Member States to set tax rates, he argued. In a reasoned opinion submitted to the Commission in December 2016, the Danish Parliament said the CCCTB proposals “are contrary to the principles of subsidiarity” and the majority of the Parliament’s Fiscal Affairs Committee were skeptical of the Commission’s reasoning “that these measures are better implemented at EU level as compared to national level”[4].

Minister Noonan also said in his remarks on 24 February 2017 that maintaining “sovereign flexibility” on tax matters would be important for Ireland to cope with the tax challenges that may arise from the UK’s exit from the European Union. In light of Ireland’s strong economic ties with the UK and the US, he made the case for the EU staying the course with the OECD’s base erosion and profit shifting (BEPS) efforts. Some have argued that implementing the CCCTB would be a distraction from international efforts to tackle corporate tax avoidance through the OECD’s work on BEPS. The BEPS project chose to focus on the arm’s length principle rather than an apportionment formula because reaching a global consensus would have been very challenging and because such a formula “would not be immune from manipulation and could not ensure that profits are truly aligned with value”[5].

There are some reasons to support the argument that the new CCCTB proposals might have a longer shelf life than their 2011 equivalent, such as the Commission’s willingness to progress with the CCCTB in two stages, the heightened public awareness of corporate tax avoidance and the departure of the one of the main critics of the original CCCTB efforts – the UK – from the EU. However, it remains hard to envisage how the strong opposition from a number of Member States will be overcome. Unanimity seems a long way away.

[2] In 2011, the Department of Finance said Ireland’s position was “one of skepticism” http://www.finance.gov.ie/sites/default/files/Common-Consolidated-Corporate-Tax-Base-CCCTB-An-Update_0.pdf

Europe and the Global Economy

The US and the Global Economy