The IIEA and ESB hosted Take Charge – Together Towards a Low Carbon Future, a major international conference on a consumer-driven energy future, on 23 November 2017. Over 300 delegates attended and listened to the speakers’ insights on how consumers could be effectively encouraged and engaged in making the vision of a low carbon future a reality. Here are our 10 takeaways.

The IIEA and ESB hosted Take Charge – Together Towards a Low Carbon Future, a major international conference on a consumer-driven energy future, on 23 November 2017 at the Round Room adjacent to the Mansion House, Dublin. Over 300 delegates attended and listened to the speakers’ insights on how consumers could be effectively encouraged and engaged in making the vision of a low carbon future a reality.

Policymakers, innovators, thought leaders and industry experts from the US, UK, Ireland and Europe came together to explore all aspects of the rapid speed of innovation in smart energy technologies, which increasingly puts the consumer at the centre of energy sector decarbonisation.

Here are ten key lessons from the conference. 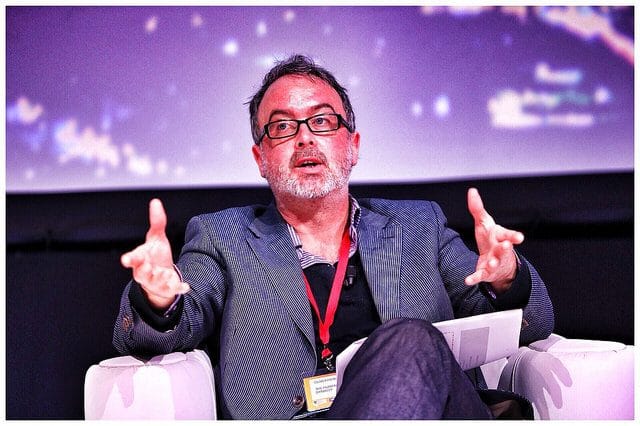 Oliver Payne, Founder and Managing Director of London-based behavioural insight and communications agency The Hunting Dynasty and co-founder of the London Behavioural Economics Network, gave a fascinating presentation on how to nudge consumers into engaging in sustainable behaviour.

He talked about the difficulty of changing engrained norms, saying that consumers “must not just be offered a choice, but need to be motivated to make a choice in the first place”. In the energy sector, such motivation can take the form of making energy feel more tangible. In fact, an American study had found that independent of demographics or political ideology, people were more likely to install rooftop solar panels if they saw their neighbours do it: a 1% increase in solar panels in the neighbourhood was found to correspond to a 1% decrease in how long it takes for the next installation in the same neighbourhood.

Similarly, American behavioural demand response leader Opower found that including a comparison of a consumer’s energy consumption against that of his or her neighbours on their energy bill yielded greater energy efficiency.

A key theme of the conference was that today’s energy consumer is increasingly ready and willing to exercise choice and control. Marguerite Sayers, Managing Director of ESB Networks, said that while the rapid speed of innovation made it impossible to anticipate everything that the grid of the future might be required to handle, the company was closely studying current trends in the energy sector to prepare the grid for the future. Ms Sayers said that one major trend was an increasing desire by consumers to have more control over their energy use. Smart meters, which are currently being rolled out in Ireland, will be a key enabler for this.

Juliet Shavit, President and CEO of SmartMark Communications, reaffirmed this assessment drawing on her substantial experience of advising utilities in the United States and around the world on their smart grid rollout strategies. According to Ms Shavit, consumers cared less about communications strategies portraying smart meters as “cool” futuristic technology, but wanted to see what the devices looked like, accompanied by transparent information on how they would enable them to exercise more control. 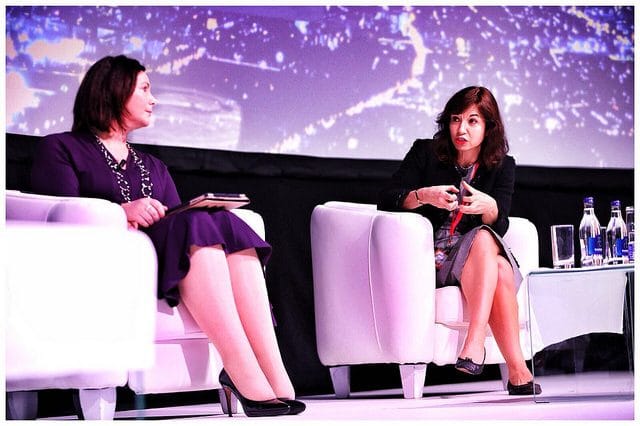 Sara Bell, Founder and CEO of Tempus Energy, told the conference about the future of energy demand side response. Harnessing flexible demand, for example by pre-cooling or heating buildings in advance of peak load times, when electricity is most expensive, will allow renewables to outcompete  traditional generation according to Ms Bell.

However, consumers are busy and do not have the time to study energy demand curves in detail. This is why the public and private sector, Ms Bell emphatically argued, must work hand in hand to make it easy for consumers to choose to consume energy when it is cheapest. Courageous policymakers need to reform energy markets to set clear price signals, while the private sector needs to continue developing and refining technologies that automate energy savings. 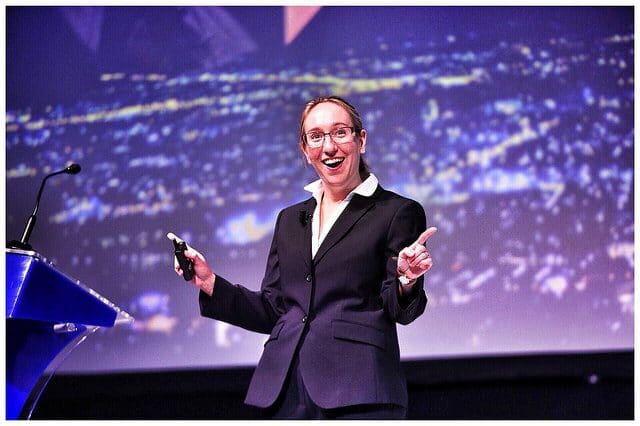 Juliet Shavit, President and CEO of SmartMark Communications, demonstrated what it is that energy consumers want. Producing a LED-lightbulb that also played music, she showed that for innovation to succeed, companies need to design products that consumers both need and want. Transparency and availability of good information on how any given technology will be beneficial to consumers is key to successful societal acceptance and integration of the technology: “Smart people need to know what to do with smart technologies,” she insisted.

Ms Shavit argued that utilities should take the lead in educating consumers by building stronger bridges between their marketing and technology departments and by making the most of their existing relationship with consumers. 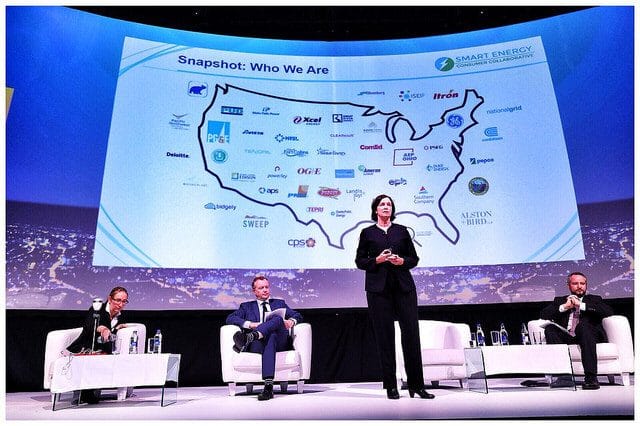 Patty Durand, President and CEO of the Smart Energy Consumer Collaborative (SECC), set out a new way of looking at energy consumers and understanding their needs and preferences. The SECC, which is based in Atlanta, USA, is a leader in energy consumer education and its annual State of the Consumer report is the authoritative study on energy consumer analysis and segmentation. Ms Durand introduced the SECC’s five consumer segments: Green Champions, Savings Seekers, Status Quo, Technology Cautious and Movers and Shakers. 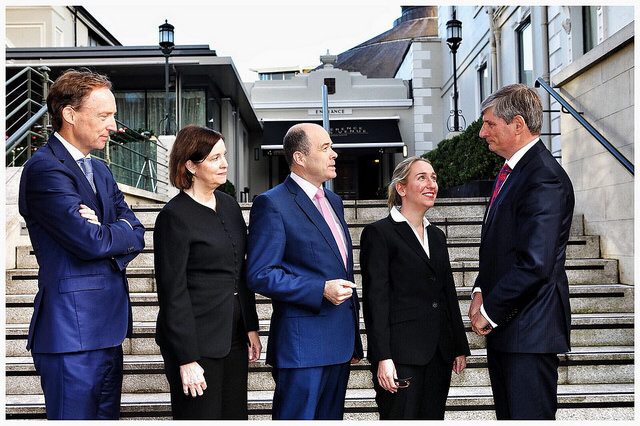 Denis Naughten TD, Minister for Communications, Climate Action and Environment, gave a Ministerial Address to conference delegates. Minister Naughten highlighted the timely nature of the conference, stating that “[w]hile Government and Industry can provide the framework and tools, it is the people themselves who use these tools that will drive forward our smart and low carbon energy future”.

Acknowledging that an understanding of how to motivate and engage energy consumers was crucial in the transition to a low carbon future, the Minister highlighted that he had secured funding to establish a Behavioural Economics Unit within the Sustainable Energy Authority of Ireland (SEAI).

Jim Gannon, CEO of the SEAI, elaborated further on the behavioural studies that the organisation had already conducted. Arguing that disruption is coming and we must embrace rather than resist it, Mr Gannon said that we must look more closely at what Irish energy consumers want. 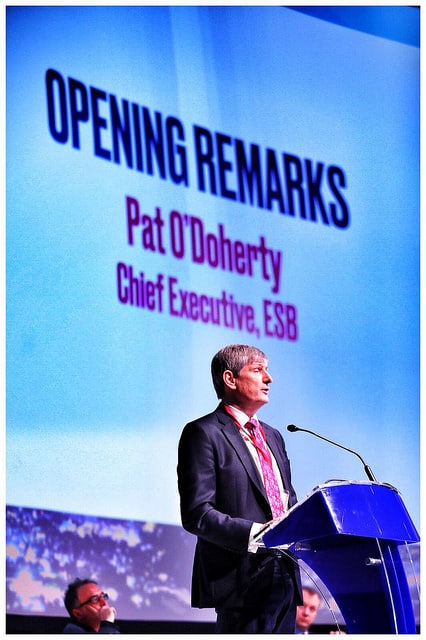 Pat O’Doherty, Chief Executive of ESB, addressed the conference on the topic of “Taking Charge – ESB’s Journey to a Low Carbon Future”. Saying that ESB is not taking its role in efforts to mitigate climate change lightly, Mr O’Doherty highlighted that ESB has already made significant investments in renewable energy, connecting over 3,000 MW of wind power to the grid. Ireland currently has the second highest penetration of wind power in Europe.

ESB’s report, Ireland’s Low Carbon Future – Dimensions of a Solution, developed with leading global energy consultancy Pöyry and launched the morning of 23 November 2017, seeks to put the realisation of a low carbon future in practical terms. Greater market penetration of electric vehicles and electric heating solutions, such as heat pumps, will be crucial in reducing emissions.

However, Mr O’Doherty said, technology options are less clear-cut for the future of electricity generation. By the end of the next decade, Ireland will need zero carbon alternatives to coal and peat generation and no one technology has emerged to replace them. All existing technologies have limitations. High efficiency gas, combined with carbon capture and storage (CCS), will have a significant impact on the decarbonisation trajectory.

ESB is in the process of completely transforming its generation portfolio to cut carbon intensity. By 2030, 40% of generation will be from renewable sources. 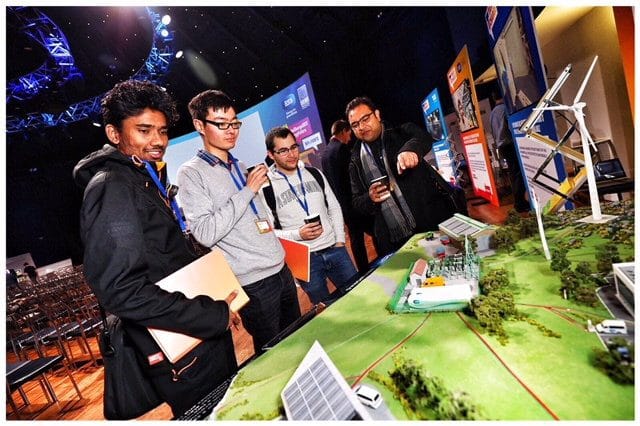 Paul Kenny, Chief Executive of the Tipperary Energy Agency (TEA), a leader in deep retrofitting of homes in Ireland, demonstrated what retrofit measures were possible in Ireland today. In particular, he talked about TEA’s near zero-energy building retrofit programme, entitled Super Homes.

The use of heat pumps in particular has enabled TEA to offer deep retrofits to homeowners at dramatically lower costs than a “standard” deep retrofit. The aim was to create a “one stop shop” for an energy efficient home, so that the homeowner can be guided through the process rather than being confused by the steps involved.  In closing, Mr Kenny emphasised that the State must look closely at the outcomes of the Citizens’ Assembly and take charge: “we need to see smart technologies have a place in society”. 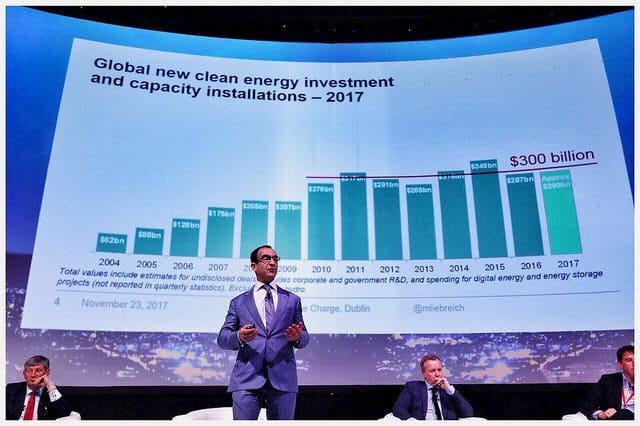 Michael Liebreich, Founder of and Senior Contributor to Bloomberg New Energy Finance, an organisation which is relied on by energy leaders around the world, gave a fascinating presentation on key global trends in clean energy investment.

Mr Liebreich noted that while the financing of the transition to clean energy seems to have slowed down, installed capacity has continued to grow as the rapid decline in costs of clean energy technologies, particularly solar PV, means that the same investment will now buy twice as many assets as in 2013.  In fact, the trend observed is that record prices tend to become median prices within 2-3 years.

Price signals, Mr Liebreich argued, are very important, as businesses will compete in whatever dimensions you set for them to compete. Around the world, the increasing move from feed-in tariffs to auctions has resulted in a 1/3 drop in prices.

Mr Liebreich stated that coal has peaked. However, only one country, the United Kingdom, has reduced energy generated from coal significantly, but other countries will follow this example soon. 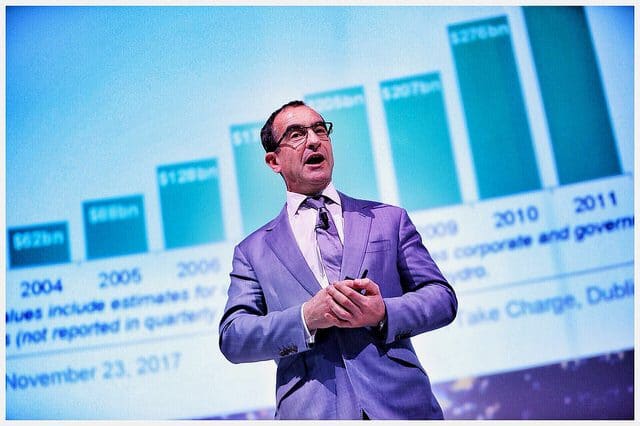 Michael Liebreich also said that Bloomberg New Energy Finance (BNEF) is very bullish about the prospects of EVs as battery prices are falling rapidly. The electrification of public transport, Mr Liebreich argued, will help address air quality issues. All manufacturers are currently rushing to produce electric buses. However, while London currently has 120 electric buses in total, at least 140,000 electric buses were sold in China in 2016 alone. In Europe, Mr Liebreich said, we are nowhere near the cutting edge of this development.

The self-driving cars of the future will drive to charging points and charge without wasting anybody’s time. However, Mr Liebreich was somewhat sceptical about driverless vehicles, as some issues had not been sufficiently thought through, such as algorithms to determine drop-off points when many people are headed to one destination at the same time, such as a concert, or the issue of wealthy individuals letting their cars circle the block rather than parking.

All videos and presentations from the Take Charge Conference are available here.