Germany holds the Presidency of the Council of the EU and the Presidency of the North Seas Energy Cooperation for the remainder of 2020. It is using these platforms to promote the abundant potential of offshore wind energy in Europe. The next six months present an opportunity for Germany to steer the EU towards advancing the European Green Deal through the development of offshore technologies and the provision of finance opportunities for offshore wind projects. 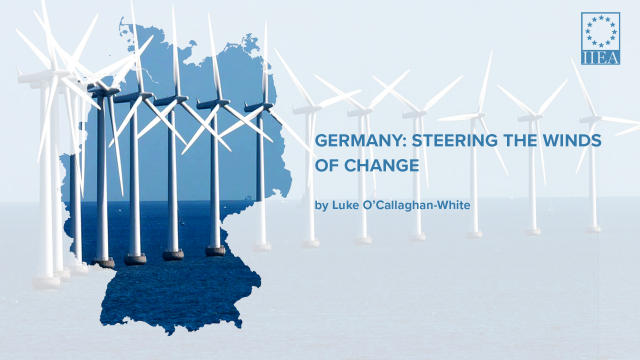 The German government adopted a significant amendment to its offshore wind power law in June 2020 which sets new targets of 20 gigawatts by 2030 and 40 gigawatts of offshore wind power by 2040. The German Minister for Economic Affairs and Energy, Peter Altmaier, said that this ‘milestone’ would allow the country to come closer to its target of reaching 65% renewable energy consumption within the next decade. It would also allow for the swift implementation of licensed offshore wind projects and would set the legal basis for green hydrogen production at sea.

This blog will explore the implications of offshore wind for the energy industry which has been hard hit by the COVID-19 crisis. It will explore the German Presidency plans for the energy sector, the European Commission’s strategy for decarbonisation of the sector. Finally, it will analyse the implications of Irish efforts to develop offshore wind energy. Ireland has very significant offshore capacity and offshore wind could be an important source of renewable energy in the future.

German Presidency of the Council of the EU

The German Presidency of the Council of the EU comes at a time when the COVID-19 pandemic has impacted virtually every aspect of Europe’s economy and society. As European Commission President, Ursula von der Leyen, remarked on 2 July 2020: “the next six months will, to a large extent, determine the future of the European Union”. Minister Altmaier is seeking to advance the abundant potential of offshore wind energy during a time when Germany holds both the Presidency of the Council of the EU and of the North Seas Energy Cooperation concurrently.

Despite the scale of the macroeconomic, budgetary and geopolitical challenges underpinning the EU Recovery Plan, the German Presidency Programme has placed an emphasis on important energy and climate considerations. The Programme for the next six months sets out Germany’s plans to conclude deliberations on the draft of a European Climate Law, find agreement on the extent to which the EU can increase its greenhouse gas emission reduction target for 2030 to 55% compared with 1990 levels, and pursue sustainable and affordable mobility in the transport sector.

In the energy sector, the rapid development of offshore wind is a major focus of the German Presidency Programme and is seen as an integral pathway towards reaching Europe’s goals in the area of renewable energy, security of energy supply, and, ultimately, in a ‘net-zero’ future.

Speaking to the European Parliament on 5 May 2020, Commissioner for Energy, Kadri Simson, remarked on the need to increase the contribution of wind energy in Europe twenty-fold and that, as part of the European Green Deal, she will present a Strategy on Offshore Renewable Energy in October 2020. This strategy is likely to contain a framework for upscaling capacity in this sector. Germany’s focus on expanding offshore wind development in its capacity as President of the Council dovetails neatly with its priorities as President of the North Seas Energy Cooperation, which it holds for 2020.

The North Seas Energy Cooperation (NSEC) is a cross-border group comprised of nine European states: Ireland, Germany, Belgium, Denmark, France, Luxembourg, the Netherlands, Sweden, and Norway. The European Commission is also a member of this group. The UK was previously a member, but its departure from the EU on 31 January 2020 also resulted in its departure from the NSEC. The focus of the NSEC is on the expansion of offshore wind energy and offshore grid infrastructure.

The EU aims to be a climate-neutral economy with net-zero greenhouse gas emissions by 2050, in line with the objectives of the Paris Agreement. Offshore wind energy is expected to play an important role in future energy systems on both a national and a cross-border basis, and to become a more significant component of the energy mix. Offshore wind is set for robust growth in Europe, in particular the North Seas, given its current technological superiority and the very favourable wind zones.

The German Presidency of the NSEC prioritises the development of ‘hybrid’ offshore wind projects. ‘Hybrid projects’ are offshore wind projects where offshore farms are linked through an interconnector to at least two member states. Germany’s European energy policy seeks to accelerate cross-border cooperation among NSEC members to allow for the mutual exchange of electricity. It sees numerous positive impacts of ‘hybrid projects’ on grid connection lines, security of supply, trade in electricity, energy costs, employment, and ultimately on reaching European energy and climate targets. Initial concepts for ‘hybrid’ offshore wind projects in the North Sea involving the Netherlands, Germany and Denmark have recently been established.

This is an excellent opportunity for Germany to further steer European attention towards the benefits of developing offshore wind capacity. Indeed, it has already commissioned the development of an international framework for the construction of wind farms, due before the end of 2020. This is likely to inform the European Commission’s strategy on offshore energy expected in October 2020.

During its tenure, Germany will presumably continue to pursue further finance and investment measures from European institutions for ‘hybrid’ projects to help alleviate the high set-up costs associated with infrastructural development.

While offshore wind energy has a rich potential in the future European energy mix it is not a panacea. Differences in labour practices, inadequacies in energy market rules, and legal issues related to the cross-border distribution of national subsidies are all barriers to development of inter-connected offshore wind farms.  Furthermore, investors have traditionally shied away from offshore wind projects due to the high investment costs and risky working conditions, though price drops and advances in technology have made it more attractive recently.

Ireland has very significant offshore wind potential as it has a sea area ten times the size of its landmass. In 2019, the Electricity Supply Board (ESB), a majority state-owned electricity company operating in Ireland, entered partnerships with Belgian company ‘Parkwind’ and Norwegian-based ‘Equinor’ to develop two new sites for offshore wind farms in the Irish Sea. The Irish 2020 Programme for Government commits to an increase in capacity in offshore wind energy off the Southern and Eastern coasts and to set out a longer-term plan as to how to profit from the abundant potential of offshore energy on the Atlantic coast. Wind energy is the largest contributing resource of renewable energy in Ireland, and the Sustainable Energy Authority of Ireland estimates that the further expansion of offshore and onshore wind could create 20,000 jobs by 2040 and contribute to 2.5% of EU electricity demand by 2050. This would strengthen Irish security of supply and increase opportunities for electricity exports.

Ireland is currently the only EU country with an Atlantic coastline that has not yet developed its offshore wind resource. However, as electricity demand is set to experience strong and prolonged growth, overcoming the present hazards and harnessing this untapped potential is an inevitable next step for the Irish energy industry.

The costs of new offshore wind technologies have continued to fall in recent years and, demand for offshore wind has increased and, as a result in 2019, Belgium, the UK and Denmark all set new national installation records in offshore wind energy capacity. Despite the traditional aversion of finance, global offshore wind investments in the first half of 2020 were four times more than the first half of 2019 and well above the total for 2019 as a whole. Commissioner Simson has recognised that a considerable amount of work needs be done at the EU level in order to facilitate current NSEC projects and to develop the industry as a whole.

The European Commission projects that offshore wind energy will play a vital role in the energy mix of a carbon neutral future. Germany’s position at the helm of the NSEC, for 2020, and of the Council of the EU, for the remainder of 2020, will give a platform to the development of inter-connected offshore wind energy projects.

The next six months present an opportunity for Germany to steer the EU towards advancing the European Green Deal through the development of offshore technologies and the provision of finance opportunities for offshore wind projects. Growth in the industry is likely to play a significant role in meeting the EU’s energy and climate objectives of 2030 and 2050.