On Sunday, 12 February 2107, Germany will elect its twelfth President. 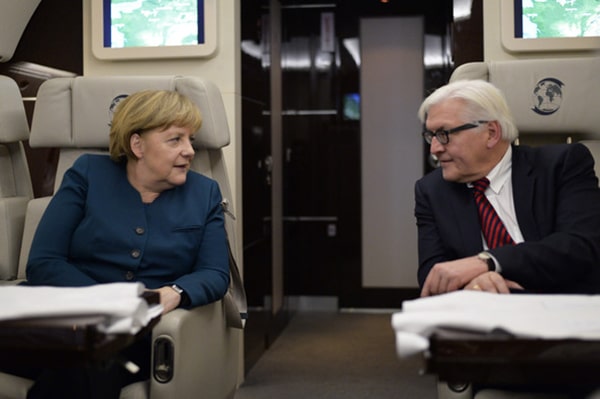 On Sunday, 12 February 2107, Germany will elect its twelfth President. The frontrunner for the position is SPD politician Dr Frank Walter Steinmeier, who is currently deemed to be the most popular politician in Germany. Dr Steinmeier, who has been German Foreign Minister from 2103 to 2017, also held the post of Foreign Minister from 2005 to 2009 during the first “Grand Coalition” and served as Vice Chancellor from 2007 to 2009. With the support of the CDU/CSU conservative parties, Dr Steinmeier seems certain to become President because the coalition government commands an absolute majority in the Federal Assembly, which elects the new President.

Although the German President’s responsibilities are largely ceremonial and, as such, broadly similar to those of the President of Ireland, the German President is not directly elected. Instead, Germans choose their President through a specific constitutional body called the Bundesversammlung or Federal Assembly, which is composed of the 630 members of the German parliament (Bundestag) and 630 delegates nominated by the sixteen State Parliaments in proportion to their population size. These delegates represent a cross-section of German society and attend the convention to vote on behalf of the federal States. They can often include celebrities such as the coach of the German national football team, Jogi Löw, who was nominated this year to represent his home state Baden Wurttemberg.[i]

No Alternative to the Consensus Candidate

While Dr Steinmeier’s election may seem like a formality, his nomination was not so smooth. After the current President, Joachim Gauck, announced in June 2016 that he would not run for a second term,[ii] the governing coalition at first announced that they would present a joint candidate to succeed him.[iii] However, after months of fruitless search, the SPD in late October broke ranks and unilaterally announced their support for Dr Steinmeier.[iv]

Chancellor Merkel’s conservative CDU/CSU initially opposed the suggestion of Dr Steinmeier for the country’s highest office and planned to put forward an alternative. However, the Chancellor struggled to find somebody that would match Steinmeier’s popularity. Potential candidates such as the President of the German Bundestag and second in the order of precedence after the Federal President, Norbert Lammert, (who will address the Institute on Thursday 23 February 2017), declined to be nominated.[v] To avoid the humiliating prospect of losing the Presidential election with a weaker CDU candidate in an election year, it was announced in mid-November 2016 that Dr Steinmeier would be the candidate for both governing parties.[vi] Chancellor Merkel, who has worked closely with Dr Steinmeier, described him as a man of the political centre, who is respected by business and society at home and abroad and who would be an ideal candidate for President.

There are similarities between this election and the 2012 presidential election, when the CDU/CSU initially opposed the nomination of Mr Gauck, but later had to abandon the search for a conservative candidate to save face. In turn, support for the SPD candidate Steinmeier for President could entail a set of negative implications for the CDU/CSU. First, if Dr Steinmeier can sustain his consistently high approval ratings, his popularity might prove to be a boon to the Social Democrats’ candidate Martin Schulz in the campaign leading up to the country’s general election on 24 September.

Second, the agreement by both major parties on the same candidate in advance of the presidential election once again may send a signal to an electorate tired of the Grand Coalition that there is little difference between them. Such a perceived lack of real choice may drive more voters towards the far-right Alternative für Deutschland (AfD) party and fuel its anti-establishment populist rhetoric.

Third, the process of arriving at the nomination of Dr Steinmeier led to infighting within the Union, which is comprised of Merkel’s CDU and the more conservative Bavarian CSU. Despite the show of unity at a recent meeting, the increasingly tense relationship and widening gap between the Union parties may confuse and erode the trust of voters.[vii]

As for Dr Steinmeier, while his diplomatic experience and consistently high approval ratings will certainly be an asset, the challenge he will face in uniting and representing a German people that are divided along an unprecedented set of issues is certainly a formidable one.