This blog outlines the background context to the Bulgarian parliamentary elections, held on Sunday, 4 April 2021, the results, and their possible implications for the EU and Ireland. 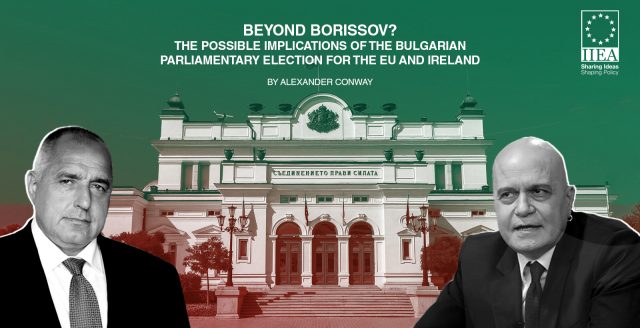 The outcome of Bulgaria’s scheduled national parliamentary elections for the Narodno Sabranie (National Assembly) on Sunday, 4 April 2021, was inconclusive.

The context of the elections were set against the background of nationwide 2020 protests against perceived widespread corruption and rule of law abuses; clashes between Bulgaria’s government, President and economic elites; and the ongoing COVID-19 pandemic. Prior to the election, protestors called for the government’s resignation over allegations of links to organised crime syndicates. In response, Mr. Borissov refuted these claims and refused to resign.

Three groups associated with the protest movement contested the elections in opposition to Mr. Borissov; the centre-right Democratic Bulgaria (DB), centre-left Stand Up! Mafia Out! (ISMV), and the populist COVID-sceptic There is Such a People (ITN) party.

There were four concerns regarding this election: First, domestic concerns that corruption, media freedom and rule of law violations in Bulgaria could undermine EU cohesion and support for Bulgaria, especially if European funds are seen to facilitate these abuses. Second, an effective and stable government is central to addressing COVID-19’s spread throughout Bulgaria (which has experienced the third highest EU death rate during the pandemic) and the broader Balkans region. Third, Bulgaria’s key role in managing the EU’s external borders with Turkey and Serbia, and its opposition to North Macedonian EU accession. Finally, protracted coalition talks could potentially delay Bulgaria’s Eurozone and Schengen accession ambitions.

While there is no clear winner yet, the electoral results can be understood as a broad rejection of establishment parties and the government coalition, with three new parties entering the National Assembly. Despite concerns over COVID-19, voter turnout was generally high, although older voters had lower participation levels, with a record turnout of Bulgarians abroad. 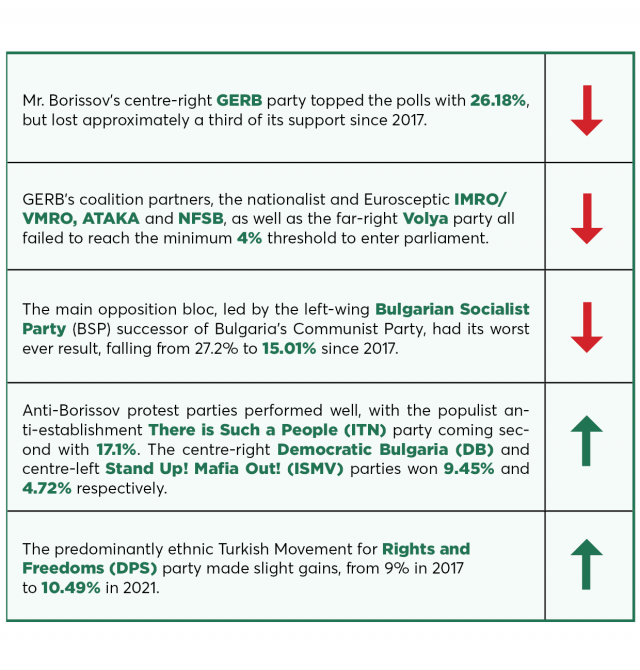 The largest party is traditionally invited to form a government, and Mr. Borissov has called for a unity government to ensure Bulgaria can address its economic and health concerns. However, coalition-building is complicated by the loss of GERB’s previous coalition partners and the parliamentary presence of three explicitly anti-Borissov parties (DB, ISMV and ITN).

Government formation could fall to ITN, led by rock-star and TV celebrity Stanislav “Slavi” Trifonov, if Mr. Borissov is unable to do so. While ITN has a strong anti-corruption stance, its policy positions remain unclear; Mr. Trifonov has stated he would work with DB and ISMV, although this would fall short of a majority.

BSP’s leader said they would not support any government nominated by Mr. Borissov’s GERB, although they may be able to play a kingmaker role if they were to support either a GERB-led government, or an ITN-DB-ISMV coalition. DPS could also potentially play this role.

While the final configuration of any potential Bulgarian government is still unknown and may take a considerable to time to form, it is probable that it will be either a temporary technocratic expert-led GERB-BSP unity government, or else an explicitly anti-Borissov coalition of ITN-DB-ISMV.

Potential Impacts for the EU

From an internal European and Irish perspective, Bulgaria’s parliamentary election will likely have little immediate impact. Mr. Borissov’s possible departure may alter the political calculus within the European People’s Party (EPP) in the European Parliament and could cause them to more robustly engage with rule of law and media freedom concerns, both in Bulgaria and other EU Member States. The EPP grouping has consistently supported Mr. Borrisov’s government, despite claims of curbs on media freedom and widespread corruption, and domestic allegations of misuse of EU funding. The relative strength of anti-corruption parties in Bulgaria potentially indicates significant support for judicial reform, and could spur efforts to challenge organised crime in Bulgarian politics, even though the protests waned due to COVID-19 restrictions. However, Ireland would welcome a coalition government explicitly oriented towards addressing corruption and challenges to the rule of law within the EU. In addition, Bulgaria has already ratified the Own Resources Decision (ORD) as part of the EU’s Recovery and Resilience Facility (RRF), which could aid Bulgaria’s phasing out of coal, and contribute to the EU’s overall climate ambitions of reducing greenhouse gas emissions.

Bulgaria as a Geopolitical Fulcrum?

Bulgaria plays a key role in managing the EU’s external relations with third countries, like the bordering Serbia, North Macedonia and Turkey, and is one of only two EU countries bordering the increasingly militarised Black Sea. It must also coordinate a delicate balancing act between its NATO and EU membership and its close commercial and energy ties with Russia.

There is broad political agreement across the Bulgarian political spectrum unless North Macedonia acknowledges the Macedonian language’s Bulgarian linguistic origins and addresses concerns of alleged anti-Bulgarian discrimination in North Macedonia, Bulgaria will block the latter’s accession. The failure of the anti-Macedonian IMRO/VMRO to enter parliament could ease the Bulgarian government’s opposition to accession. A softened line on North Macedonian EU accession may unblock progress on enlargement efforts and enhance Europe’s strategic influence in the broader region, a position Ireland strongly supports.

Though EU-Russia relations continue to be strained, it is worth noting the positive public and political dispositions towards Russia in Bulgaria. This continues to be the case in spite of the recent expulsion of Russian diplomats suspected of espionage on NATO and EU activities. Although Bulgaria has made efforts to reduce its dependency on Russian natural gas imports in recent times, concerns remain among EU and NATO members over alleged Russian influence in Bulgaria, and may persist if the pro-Russian BSP were to be part of a future government.

Turkey and Bulgaria have maintained close ties, despite tensions between the EU and Turkey over the Eastern Mediterranean, although the Bulgarian government remains concerned over potential Turkish political influence within the country.

Bulgaria’s previous political stability has been disrupted by this election, which introduced three new parties into parliament and left 16% of voters effectively unrepresented. It is unclear how a coalition can be forged from the results, and a looming political deadlock or new election may be imminent. The outcome suggests that Bulgaria’s political status quo faces significant challenges from anti-corruption parties and this could spell significant changes for Bulgaria and the EU.