In his address to the IIEA, Prof. Garton Ash analysed Brexit in the context of what is happening across the Continent (and beyond).

This address is the first in a series of talks on Populism and the Challenges to the Liberal Order, which was co-hosted by Trinity College Dublin and the IIEA. In his keynote address Prof Garton Ash analysed Brexit in the context of what is happening across the Continent (and beyond). He discussed both the prospects for reversing, or at least significantly softening, Brexit, and how Brexit fits into the wider set of EU crises.

Timothy Garton Ash is Professor of European Studies in the University of Oxford, Isaiah Berlin Professorial Fellow at St Antony’s College, Oxford, and a Senior Fellow at the Hoover Institution, Stanford University. Garton Ash’s writings have focused on Europe’s history since 1945 and ‘the history of the present.’ He is the author of ten books, writes a column in the Guardian on international affairs syndicated in Europe, the US and Asia and is a regular contributor to the New York Review of Books. In 2017, he was awarded the prestigious Charlemagne Prize, which is awarded to those who have worked in the service of European unification. He has featured on a list of 100 top global public intellectuals chosen by the journals Prospect and Foreign Policy, and on Time magazine’s list of the world’s 100 most influential people. 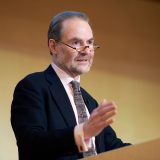