On 10 November 2015, Prime Minister David Cameron wrote to the President of the European Council, Donald Tusk, setting out the UK’s case for reform of the European Union. 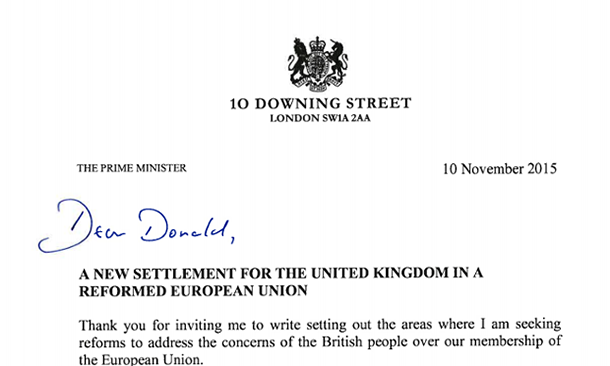 On 10 November 2015, Prime Minister David Cameron wrote to the President of the European Council, Donald Tusk, setting out the UK’s case for reform of the European Union.

Ahead of the issuing of the letter, the Prime Minister addressed a Chatham House event, asserting that the planned renegotiation, and the referendum which would follow, would lead to what he described as the most important decision the British people will have to take at the ballot box in their lifetimes. He went on to argue that the European Union needs to change in order to become more competitive, and that a durable, stable relationship between the Eurozone ins and outs must be achieved, in order to create a more flexible EU.

David Cameron spoke of Britain as a country which is rigorously practical, and which sees the EU as a means to an end, not as an end in itself. In the context of recent security threats, he commented that for Britain the European question is not just a matter of economic security, but of national security too.  In this context, Mr. Cameron invoked the 2013 statement by the Dutch coalition government: ‘Europe where necessary, national where possible’.

In his letter to President Tusk, he set out his four substantive proposals under the headings of Economic Governance and the Eurozone, Competitiveness, Sovereignty and Immigration, summing them up in clear terms:

Turning to the forthcoming negotiations, David Cameron expressed his confidence that the UK can achieve an agreement that works both for Britain and the other Member States. Should this be achieved, he said, he would campaign to keep Britain inside a reformed European Union: […] I’ll campaign for it with all my heart and soul.” Nonetheless, the Prime Minister has warned that a failure to reach such an agreement could force the UK to rethink its membership of the Union.

Calling on his fellow members of European Council to live up to the EU’s record of solving intractable problems, David Cameron concluded:

Mixed reaction in the House of Commons

In a House of Commons debate on 10 November, a Government Statement on the letter was introduced by the Minister for Europe, David Lidington, who argued that the purpose of the letter was not to describe the precise means and detailed legal amendments for the UK’s reforms; that is, according to him, a matter for the renegotiation itself. The letter is instead intended to begin the conversation about finding solutions to the UK’s concerns. Mr. Lidington echoed the language of Mr. Cameron’s letter in saying that the agreement must be “legally binding and irreversible and, where necessary, have force in the treaties.” He stated that the emphasis of the renegotiations must be on getting the substance right – only once that was achieved would the question of a date for the referendum arise.

The letter drew a range of reactions from across the House. Speaking for the Labour Party, Pat McFadden stated that Britain is more powerful, prosperous and secure as a member of the EU. Though he is in favour of a reformed EU, his party would not “stand for the nationalism that says that we would be better off out, or for a Brexit that would see Britain weaker in power and influence, and diminished in the eyes of the world.” He also warned against any move by the Government to diminish hard-won employment rights in the Union.

Minister Lidington faced strong opposition from several speakers on his own side of the House, led by Sir William Cash who questioned the likelihood of obtaining treaty change. John Redwood insisted on the need for the UK to control its own borders, while Jacob Rees-Mogg saw the letter as “pretty thin gruel.”

Ian Paisley, for the DUP, on the issue of treaty change, argued that “the Council of Ministers and the European Commission constantly break their own solemn word, and their treaties, in matters that are fundamental to them, so why should we put our faith or trust in any changes that they might agree to?”

On 7 December 2015, President Tusk responded to Mr. Cameron’s points in a letter to the members of the European Council, in order to elaborate on the current state of play in advance of the Summit of European Heads of State and Government on 17-18 December.

Addressing the four policy areas raised by the Prime Minister, President Tusk indicated that, on the relations between the euro ins and outs, the European Council could search for an agreement around a set of principles that will ensure the possibility for the euro area to develop further, while avoiding discrimination vis-à-vis Member States that are not part of the Eurozone.

On competitiveness, he pointed to an existing, strong determination to promote this objective and to lower the regulatory burden for business, while maintaining high standards. He also noted that wide agreement exists “that the concept of ‘ever closer union among the peoples’ allows for various paths of integration for different countries.”  He argued that there is also a shared view on the importance of the role of national parliaments within the Union as well as strong emphasis on the principle of subsidiarity.

However, he stated firmly that “the fourth basket on social benefits and the free movement of persons is the most delicate and will require a substantive political discussion” at the December meeting. There is presently no consensus on Mr. Cameron’s request that people coming to Britain from the EU must live there and contribute for four years before they qualify for in-work benefits or social housing.

In concluding, Donald Tusk then introduced some “political remarks”:

All involved must take their part of responsibility. I will act as an honest broker but all Member States and the institutions must show readiness for compromise for this process to succeed. Our goal is to find solutions that will meet the expectations of the British Prime Minister, while cementing the foundations on which the EU is based. Uncertainty about the future of the UK in the European Union is a destabilizing factor. That is why we must find a way to answer the British concerns as quickly as possible.

Political reaction in London reflected the difference between the two camps. David Cameron’s office welcomed the letter as encouraging but noted that the renegotiation will be a difficult process. A spokesperson for ‘Britain Stronger in Europe’ saw the Cameron letter as “a really good agenda for reform […] which the rest of Europe wants to see as well.”

On the other side, Matthew Elliott, CEO of Vote Leave, was scathing: “David Cameron is only asking for trivial things, not the fundamental change he used to say we need.  That is why he is now having a manufactured row with the EU to try and make his renegotiation sound more significant than it really is.” And UKIP’s Paul Nuttall said that the Prime Minister now has no choice but to campaign to leave: “President Tusk has called Cameron’s bluff…”

The Tory MEP Syed Kamall commented that there would have to be a compromise on the deal, saying “that’s the way business is done in this town.”

The head of the Commission Task Force on the British Renegotiation, Jonathan Faull, spoke at the IIEA on 25 November during his visit to Dublin for consultations. The video of that event can be found here.