In the run-up to the Bratislava Summit of the EU 27 on 16 September, European Commission President Jean-Claude Juncker delivered his annual State of the Union Address in Strasbourg on 14 September 2016 before members of the European Parliament, the College of Commissioners and the Slovak Presidency of the Council of the EU. 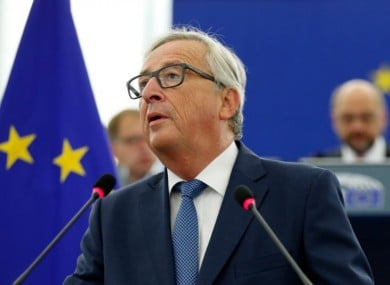 In the run-up to the Bratislava Summit of the EU 27 on 16 September, European Commission President Jean-Claude Juncker delivered his annual State of the Union Address in Strasbourg on 14 September 2016 before members of the European Parliament, the College of Commissioners and the Slovak Presidency of the Council of the EU.

Since first instigated in 2010, the annual State of the Union Address has provided an overview of the political and legislative programme of the Union for the year ahead. It has also developed into an important tool for the Commission to address its priorities in a more open and transparent manner.  While each address brings with it certain challenges for the year ahead, this address comes at a particularly trying time. Not only does the EU have to navigate its way through the migration crisis, terrorist threats, and crises in Turkey and Ukraine, it also has to contend with the repercussions of Brexit. Indeed President Juncker’s speech comes at a time when populism, coupled with the fear of political contagion after Brexit, is thought to be overshadowing common European action. This year also marks the first instance of European disintegration since the European Coal and Steel Community was established in 1951.

On the morning of Wednesday, 14 September 2016, President Juncker delivered a near hour-long address, entitled Towards a Better Europe – A Europe that Protects, Empowers and Defends, to a packed European Parliament Plenary where he outlined the Commission’s vision for the year ahead.

While President Juncker unveiled a number of measures aimed at improving security and prosperity (see below), central to his speech was an appeal for the preservation of solidarity and traditional EU values among Member States. He argued that tdivisions are leaving scope for “galloping populism” and that EU fragmentation “cannot bow to the interest of individual Member States”. More specifically, he called for efforts to overcome emerging differences between “East and West”, and remarked that never before has he witnessed so little common ground between Member States.

In an effort to appease more Eurosceptic factions, President Juncker also made assurances that the European Commission does not intend to undermine the national sovereignty of Member States and that the EU is not going down the path of nationalisation.

Given the current political climate in Europe and the perceived lack of public appetite for further European integration, President Juncker urged the European institutions and national governments alike to “take responsibility” and to put an end to the myth that all success is national. He also called for common focus and cooperation in areas where the EU can give true added value as “the next twelve months are decisive if we want to reunite our Union”.

The full State of the Union Address as delivered is available here: http://www.euractiv.com/section/future-eu/video/live-state-of-the-european-union/; http://europa.eu/rapid/press-release_SPEECH-16-3043_en.htm

President Juncker addressed several policy areas and proposals in his speech. The important points can be found below.

President Juncker called for swift triggering of Article 50 by the UK and warned that the UK should not expect full access to the European Single Market without first accepting the principal of free movement of people.

He urged all National Parliaments to quickly ratify the Paris Climate Goals, arguing that “dragging our feet on ratification” undermines the international credibility of the Union.

President Juncker endorsed the EU-Canada Comprehensive Economic and Trade Agreement as “the best and most progressive deal the EU has ever negotiated”.

President Juncker stated that the European Commission is committed to fighting tax evasion and that “every company, no matter how big or small, should pay taxes where the profits are made”.

Referring to the failure of some Member States to adhere to the rules of the Stability and Growth Pact, President Juncker argued that the Commission is employing a certain amount of discretion in implementing the Pact in order to better examine and understand the reasons for debt before coming to a conclusion.

He argued that moving towards a Capital Markets Union will make Europe’s financial system more resilient and will allow business to access more diversified means of finance.

President Juncker announced a proposal to reform the European telecommunications markets via the creation of a new legal framework. Its aim is to attract new investments in connectivity. In addition, the Commission is also proposing to deploy 5G telecommunication standards across the EU by 2025.

As part of the Digital Single Market strategy, President Juncker launched a proposal to overhaul current EU copyright rules in order to provide a fair marketplace for creators and journalists.

Due to the success of the EFSI since its launch in 2015, the Commission is aiming to double the duration of the Fund and its financial capacity. Its objective is to provide €500 billion of investment funding by 2020.

President Juncker called on the Slovak Presidency to bridge divergences between Eastern and Western Member States with regard to the relocation and resettlement of refugees, underling the importance of solidarity. He also proposed the establishment of a EU Solidarity Corps. This initiative will allow young people from across the Union the opportunity to volunteer with NGOs responding to crisis situations as part of the existing EU professional and volunteering programmes.

The Commission announced its intention to launch an investment plan for Africa and the neighbourhood as a means of tackling the root causes of migration. This Fund hopes to mobilise a minimum of €44 billion in investment funds.

Frontex’s operational tasks and its prerogatives on processing personal data is to be expanded, and an estimated 200 extra border guards and 50 extra vehicles will be deployed at the Bulgarian external borders as of October 2016.

The Commission intends to propose the establishment of an automated travel information system that will keep record of everyone entering the Union and their purpose of travel.

President Juncker recalled that the Lisbon Treaty allows scope for Member States to pool their capacities in the form of a permanent structured cooperation and argued that now was the time to move forward on this. He also announced the intention to establish a European Defence Fund by the end of 2016.

The Commission would like to see the role of the High-Representative of the EU upgraded to Foreign Minister status who would represent “all diplomatic services, of big and small countries alike, and pool their forces to achieve leverage in international negotiations”.

The European Commission’s vision for 2016-2017 is ambitious in nature with several major proposals in the area of Digital Single Market and the creation of a new union in the area defence all in the pipeline.

On one side of the coin, certain Member States and political leaders, particularly those on the centre-left, perceive this period following the UK Referendum as an opportunity to move towards the longstanding goal of “ever closer union”. However, at a time when surveys indicate that public support for the EU and further European integration is at an all time low, the other school of thought contends further EU involvement in sensitive areas such as tax, defence, foreign policy and refugee resettlement may add to the current disenchantment. Indeed this mantra follows the line of European Council President, Donald Tusk, who in a letter to Heads of State and Government on 13 September 2016 stated: “my talks with you clearly show that giving new powers to European institutions is not the desired recipe”.

President Juncker’s address was presented against a backdrop of political uncertainty and instability in several EU Member States, which will make it difficult for the Commission to push certain files through the Council in the foreseeable future. France, Germany and the Netherlands have major elections taking place in 2017, with possible French Presidential Candidate Marine Le Penn promising a vote on France’s membership, should she be elected to office. Spain is still without a government and could be on course for its third general election, and Italy and Hungary both have upcoming referenda on constitutional and migration issues respectively. Members of the Visegrad Group have also been very vocal in their opposition to mandatory migrant relocation.

The Summit of the EU 27 in Bratislava on 16 September will kick start a process of identifying what direction and shape the European Union will take without the United Kingdom. President Juncker’s address and the Commission’s proposals are likely to be debated and an attempt to find common ground and bridge divisions on key issues will be sought.  To quote President Juncker: “We have to stop with the same old story that success is national, and failure European. Or our common project will not survive”.