This blog will firstly review how the pandemic has reshaped the French governmental agenda for the remaining two years of President Macron’s current Presidency. Second, it will examine the implications of the recent €100bn national recovery plan, following agreement on the EU’s recovery package. 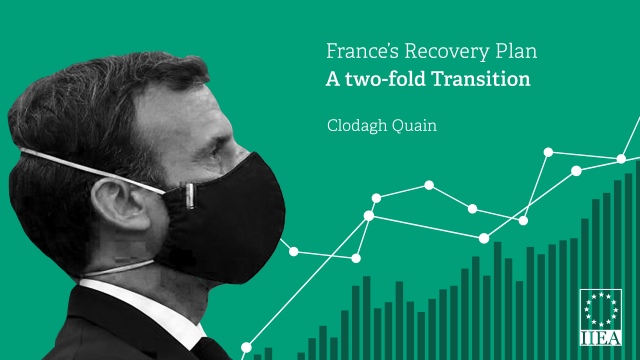 On 14 July 2020, Bastille Day, Emmanuel Macron marked the mid-point of his five-year tenure with a Covid-19 response plan. In advance of the forthcoming Presidential election in 2022, the French President has focused his agenda on economic recovery and the climate.

This blog will firstly review how the pandemic has reshaped the French governmental agenda for the remaining two years of President Macron’s current Presidency. Second, it will examine the implications of the recent €100bn national recovery plan, following agreement on the EU’s recovery package.

On 3 September 2020, the newly appointed French Prime Minister, Jean Castex, announced a €100bn recovery plan for France. At 4% of the national GDP, France’s recovery package is the largest in the EU relative to the scale of its economy. The pared-down “Relaunching France” plan focuses on two objectives: an ecological transition and economic recovery.

Following an eight-week national lockdown which began on 17 March, France remains on high alert with regard to the pandemic. At the time of writing, the number of fatalities has surpassed 30,000 and France has approximately 373,911 confirmed cases of the coronavirus nationally[1]. In economic terms, the French economy has contracted by a record 13.8% in the second quarter of 2020, and is 19% lower than the second quarter of 2019, according to France’s national statistics institute, INSEE[2]. Both the scale of the country’s losses and higher GDP losses due to COVID-19 have, as a result, placed France in the position of a key beneficiary of the agreed EU Recovery Fund.

The pandemic has also exacerbated the political challenge for President Macron, who has admitted that France was ill-prepared.

Despite the high level of uncertainty and losses incurred in the pandemic, the French President’s ambitions have not waned. Instead, President Macron, has committed to rebuilding a “strong, ecological, sovereign and united” economy; a vision also expressed for Europe in his landmark speech at the Sorbonne University in 2017.[3]

The “Relaunching France” plan has been promoted as a transformational plan for 2030, making France a more green, independent, and competitive country. President Macron contends that within the next decade, France and Europe could provide a blueprint for a prosperous, environmental, and human-centred economy.

The plan has been considerably bolstered by the allocation criteria for the €390 billion grant programme in the EU Recovery package which gave approximately €3bn to Ireland, while also placing France in a favourable position as a recipient. €40 billion of France’s €100 billion recovery fund derives from the EU Recovery package. This fiscal reboot is in addition to the approximate €460 billion spent on curtailing the economic cost of France’s lockdown.

The €100bn proposed has been split into three primary categories: an ecological transition, economic competitiveness and social cohesion. Within the “Relaunching France” plan, €30bn is allocated to an ecological transition which includes support for green technologies and the hydrogen industry, among others. €35bn will support President Macron’s vision for industrial competitiveness which includes €1bn for reshoring strategic businesses including health. Finally, €35bn will provide for skills training and employment projects.

A Coup for France?

Environmental observers have argued that the €30bn is insufficient for a green transition and that government support for road and air traffic are counterproductive.[4] The government’s plan to make France the new ‘champion of green hydrogen’ also depends heavily on the use of its nuclear plants. At present, the European Commission has mandated the Joint Research Centre to assess whether nuclear power could be considered within the EU’s sustainable finance taxonomy. The process is not expected to conclude until late 2021, which could impact EU funding for France.

From an economic perspective, France’s strategy for a “reshoring” of parts of industry, including healthcare products, has been previously challenged. Concerns among industry experts highlighted the potential for a duplication in costs and a retreat from international trade. France’s Minister for External Trade, Franck Riester, has defended the proposal, dismissing arguments for economic decoupling and called for a rethink of globalisation in the EU.[5] The reshoring of pharmaceutical production envisaged in the “Relaunching France” plan has proposed a return to manufacturing critical healthcare products such as raw materials and active pharmaceutical ingredients, medical devices and strategic components, within or closer to France.

The country’s ambition to reshore, however, will face the broader issues of a fragmented supply chain and cost-dependent manufacturing. The proposal will also be of concern to Ireland, currently the largest net exporter of medicines globally and a manufacturing base for both US and French pharmaceutical companies.

Aside from the plan to reshore the strategic health sector production, France remains in a medical crisis. It is now experiencing a resurgence in cases of COVID-19 which will place further pressure on the national healthcare system and economy and pose a continued political risk to the current government.

President Macron has made several changes in the post-lockdown period to prepare the country for economic recovery and to offer a new policy agenda. The measures have been met with a mixed response.

The political reshuffle on 6 July, 2020, reflected the priorities of the government in a new phase. While the changes were largely cosmetic, the appointment of Jean Castex, a lower profile politician, as Prime Minister has further enhanced President Macron’s visibility for the remaining two-years of his term. Bruno Le Maire’s responsibilities will be extended to the Economy, Finance and Recovery.

The more significant change, however, is the appointment of Barbara Pompili, a former founder of the Green Party (EELV), as Minister for Ecological Transition. Both President Macron’s green recovery plan and Ms Pompili’s longstanding experience with green parties may appeal to the broad electorate swayed by the greens in the municipal elections of 2020.

“Relaunching France” effectively has given a focus to President Macron’s unwieldly vision for France and Europe for the brief remaining two years of his tenure. The modernisation plan has, however, been perceived as a revival of France’s post-war economic plan with an extended timeline[6]. On the other hand, the political landscape in France also remains fragmented which could be unfavourable for LREM in regaining its electorate and the populist opponent, Marine Le Pen of Rassemblement National, is also in contention for the Presidency.

If successful, France’s heavy stimulus package could provide and sustain greater social and economic cohesion in the country. A green transition, enhanced digital technology and a focus on youth employment, would furthermore reflect the broader changes proposed at EU level to modernise economies and enhance resilience.

The French government’s economic recovery plan aims to return France to the pre-crisis level by 2022, which coincides with the French presidential election. The political stakes remain high with the potential for further disruption due to COVID-19. Despite concerns, the French government’s decision to generate growth and avoid increased tax rates may prove favourable if real reform can be achieved in the remaining years.

[1] COVID-19 situation update for the EU/EEA and the UK, as of 14 September 2020, European Centre for Disease Prevention and Control

[6] ‘The man with le Plan: Emmanuel Macron revives a post-war institution for a post-war era’, The Economist, 5 September 2020, https://www.economist.com/europe/2020/09/05/emmanuel-macron-revives-a-post-war-institution-for-a-post-covid-era