On Friday, 12 January 2018, the CDU, CSU and SPD published the conclusions of the exploratory talks about the potential continuation of a Grand Coalition in Germany. 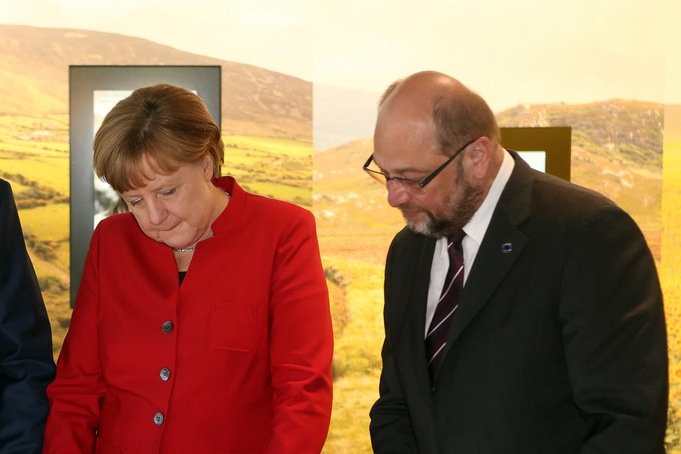 On Friday, 12 January 2018, the three prospective German coalition partners, CDU, CSU and SPD published a 28-page paper outlining the conclusions of the exploratory talks about the potential continuation of a Grand Coalition in Germany. This blog post will contextualise the significance of this paper, examine its main proposals on European policy, and outline next steps towards the formation of a new government in Germany, a process which has been ongoing since the Federal Elections of 24 September 2017.

What is the significance of the conclusions of the exploratory talks?

This document, rather than being a coalition agreement, is merely an outline of positions on key issues. On the basis of these positions, all three parties have decided (the CDU on 12 January 2018 and the CSU on 15 January 2018) or will decide (in the case of the SPD on 21 January 2018) whether to enter formal coalition negotiations.

While still an early stage in the formation of the next German Government, this paper is a crucial step and its content is important for all three parties, which are currently struggling for legitimacy with the German electorate.

CDU: Federal Chancellor Angela Merkel has been destabilised by her party’s weak performance in the September 2017 Federal elections. The collapse of exploratory talks about the formation of a so-called “Jamaica Coalition” of CDU/CSU, The Green Party and the free-market FDP in November 2017 further undermined public confidence in the Chancellor’s ability to lead another government. According to a recent poll, more than half of Germans think that even if a third Merkel-led Grand Coalition emerges, the Chancellor is unlikely to serve a full four-year term as head of government. The success of the paper in convincing all parties (and especially the SPD) to proceed with coalition negotiations is thus crucial for the Chancellor as well as the CDU as a whole.

CSU: The Bavarian CSU, generally espousing more conservative views than the CDU, achieved its worst result yet in Bavaria, the only state where it stands for election, in the 2017 Federal Elections. The party secured just 38% of the vote in the state, down from 49.3% in the 2013 Federal Elections, losing many voters to the far-right Alternative für Deutschland party. Currently, the CSU is preparing for Bavarian regional parliamentary elections likely to take place on 14 October 2018. At the same time, it is undergoing a leadership change, with Bavarian Finance Minister Markus Söder set to take over as Minister President of Bavaria from party chair Horst Seehofer in the first quarter of 2018. The CSU has to navigate the fine line between demonstrating an ability to govern on the Federal level, while not being seen to give up on its conservative values in its home state of Bavaria.

SPD: After achieving the worst result in a Federal Election since 1949, the SPD’s leader and former European parliament President Martin Schulz initially ruled out a continuation of the Grand Coalition of CDU/CSU and SPD, which had governed Germany from 2013-2017. After the collapse of Jamaica exploratory talks and after intervention by Germany’s Federal President Frank-Walter Steinmeier, however, the SPD agreed to enter talks with CDU and CSU. The conclusions of these talks are important as they must demonstrate to SPD members that the party leadership was able to secure some social democratic priorities instead of being overshadowed by the Chancellor’s CDU, which was the perception of the previous government.

What are the paper’s conclusions on European policy and politics?

While the conclusions are meant to be an outline for future negotiations, they are quite specific in parts about a potential future government’s European priorities.

The paper’s dedicated section on Europe begins by quoting almost verbatim the Chancellor’s now well-known statement that in a time of shifting geopolitics, “Europe must take its fate in its own hands more than before”. All three parties thus want to further cohesion and solidarity in Europe to render it more able to respond to future challenges.

The paper calls for a “Europe of Opportunity and Fairness”. Under this heading, a priority for the parties is to “prevent tax dumping, tax fraud and tax avoidance”. The parties thus support “fair taxation of large companies, especially the digital companies Google, Apple, Facebook and Amazon”. This is to put a stop to companies “avoiding their social responsibility by pitching Member States against another”. The introduction of an effective European Financial Transaction Tax (FTT), which has been on Germany’s European agenda since 2011, is also a goal of the parties in the period 2018-2021.

Increasing Europe’s ability to act also includes strengthening Europe financially. The parties say that in the creation of the next Multiannual Financial Framework, they will advocate allocating specific budgetary funds for “economic stabilisation, social convergence and structural reforms of the Eurozone”. Interestingly, the parties note that these funds could be the starting point for a “Eurozone Investment Budget”.  The parties declare themselves prepared to increase Germany’s contribution to the EU budget.

On the topic of Eurozone reforms, the parties want to pursue sustainable reform “in close partnership with France”, while also emphasising that it will “examine” all proposals for reform put forward by Member States and the European Commission. The parties come out in favour of transforming the European Stability Mechanism (ESM) into a European Monetary Fund (EMF) “under parliamentary control and enshrined in EU law”, but do not elaborate further on the precise shape of a future EMF.

The parties emphasise that the renewal of the EU can only work if Germany and France work together to achieve this aim. They call for a new Elysée Treaty to reaffirm this alliance. Collaboration in research and development, and especially in Artificial intelligence (AI), which had already been explicitly mentioned in the CDU/CSU election manifesto, is again mentioned as a particular priority here. While the parties hope to be able to generate consensus among all EU Member States in reforming and renewing Europe, they state that where such consensus cannot be reached, they will proceed bilaterally together with France.

On defence, the paper does not explicitly mention the CDU/CSU’s goal of reaching the NATO target of spending 2% of GDP on defence. Instead, it mentions that political solutions always have to take priority over military ones, reflecting especially the attitude of SPD foreign minister Sigmar Gabriel in his speech at the 2017 Munich Security Conference. In the period 2018-2021, the parties want to increase the budget for “defence and the achievement of the 0.7% ODA goal” by 2 billion euros. While both parties had committed themselves to achieving the ODA goal in their 2017 election manifestos, deliberately avoiding a separation of NATO and ODA budgets can be seen as a concession to the SPD, which has advocated taking a more comprehensive view of “defence”, which also includes development assistance. On European defence policy, the conclusions state that the parties want to strengthen PESCO and “fill it with life”.

The migration cap of no more than 200,000 migrants and refugees annually, which had been a particular priority for the CSU, appears in somewhat less strict language. The parties “note” that future immigration numbers “will not” exceed numbers of 180,000-220,000 annually and propose several policy measures to ensure these figures. In the European security sphere, the parties emphasise that they want to protect effectively Europe’s external borders by developing Frontex into a “real border police”. Until Europe’s external borders are effectively protected, according to the parties, internal border checks are justified. A fair European Asylum System, including a mechanism for distributing refugees among the Member States, is another priority in this area.

What are the next steps?

On the basis of the conclusions of the exploratory talks, all parties will now have to decide internally whether to proceed with formal coalition negotiations. For CDU and CSU, this process has already concluded as only the party leadership needs to vote on whether to proceed. Both parties have voted in favour of entering coalition negotiations. The SPD, however, will make this decision at a special party conference in Bonn on Sunday, 21 January 2018, at which 600 delegates will vote on whether to proceed. Even if coalition negotiations proceed, the final agreement must pass a vote by the whole SPD membership (the so-called Basis) of approximately 430,000 before it can be finalised. Europe will be watching closely whether the SPD leadership will be able to convince the party to move ahead this coming Sunday.