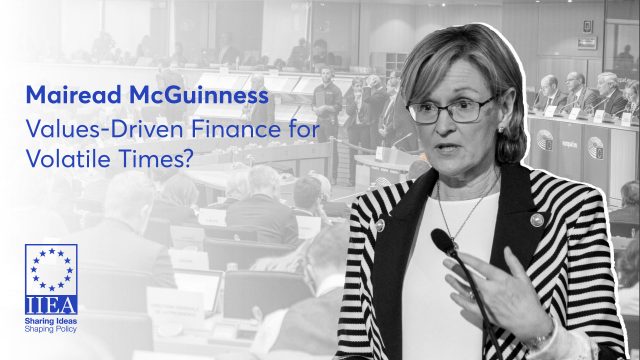 Mairead McGuinness, a member of Fine Gael (EPP), has been the Vice-President of the European Parliament from 2017-2020 and has been an MEP for Ireland’s Midland’s North-West constituency since 2004.

As the Irish candidate to replace Phil Hogan following his resignation after the so-called “Golfgate” scandal, she received a very positive cross-party response at her hearing in the European Parliament’s Economic and Monetary Affairs Committee (ECON) Committee on 2 October 2020 and was confirmed as the Commissioner for Financial Services, Financial Stability and Capital Markets Union on 7 October 2020 by 583 votes to 75 against, with 37 abstentions.1 She now needs to be formally confirmed via written procedure by a qualified majority in the European Council.2

Her hearing as Commissioner-Designate was held in the context of ongoing financial and economic responses to the COVID-19 pandemic and an increasingly uncertain outcome for future EU-UK relations on 31 December 2020. Commissioner McGuinness will be responsible for preserving and ensuring financial stability in the EU, protecting savers and investors and ensuring the free flow of capital within the Single Market.3 She will work with Valdis Dombrovskis, the Executive Vice-President for an Economy that Works for People, who was formerly responsible for financial services and will lead the Directorate-General for Financial Stability, Financial Services and the Capital Markets Union (DG FISMA) with John Berrigan, Director General, DG FISMA.

In her mission letter, President von der Leyen asked Ms. McGuinness to focus on completing the Banking Union, in particular finalising a common backstop to the Single Resolution Fund and reaching agreement on a European Deposit Insurance Scheme (EDIS).

During her hearing last week at the ECON Committee, Mairead McGuinness stressed the symbiosis between completing Banking Union and Capital Markets Union and their importance in protecting and supporting small and medium enterprises (SMEs). She also promised to “inject fresh energy”, with the backing of the European Parliament, into overcoming the existing barriers to completing Banking Union, noting that COVID-19 had shifted some Member States’ positions on the issue, which indicates there may be an opportunity for progress.

Responding to concerns about non-performing loans and the dangers they pose for lending facilities, Ms. McGuinness attempted to strike a balance between tackling these loans while also protecting investors and lenders, and refused to answer questions about potentially establishing an EU “bad bank” to handle these non-performing loans.

As outlined by President von der Leyen in her mission letter, Commissioner McGuinness is tasked with speeding up work on the Capital Markets Union and easing the flow of capital for cross-border investments in the EU. In her hearing, Ms. McGuinness noted that the Capital Markets Union was a long-term project and that she would attempt to break the current impasse and make “brave choices” now possible as a result of the COVID-19 response, with particular reference to a European Deposit Insurance Scheme (EDIS).

Ms. McGuinness is in favour of better matching domestic savings of EU citizens and investors, which have built up due to COVID-19, and investment opportunities in SMEs and start-ups through fostering closer links with national supervisors as an incremental step towards deeper Capital Markets Union.  She expressed her support for this as part of the Capital Markets Union Action Plan. She also stated that she would cooperate with Commissioner Vestager to address blockages in cross-border financial services provision and possible uncompetitive market behaviour on mortgage interest rates in certain Members States, such as Ireland, Malta and Latvia.

Commissioner McGuinness confirmed her support for the EU Green Bond standards and the need for private investment if the EU is to achieve its European Green Deal and Digital Decade ambitions. She demurred on the specific legislative instruments needed to achieve and enforce this until the Commission has investigated further and received stakeholder feedback. Ms. McGuinness also noted the need to link these standards to the Taxonomy Regulation, if the EU is to be a global leader in sustainable finance and supply credible verification of investments’ green credentials. In response to a question Ms. McGuinness also hinted at the possible expansion of the Green Bond criteria to include biodiversity and climate risks, though she bowed to the expertise of the ENVI Committee in this regard, as well as future application to the public sector and private investments.

With respect to cryptocurrency regulation, Commissioner McGuinness underlined the need for effective supervision and regulation of these currencies, in the context of several references to the Wirecard supervision scandal in MEPs’ questions.

In her opening remarks, Ms. McGuinness confirmed her support for the recently published Digital Finance Package as well as the Digital Payments Strategy and European Strategy for Data as key tools in addressing the fragmentation of EU financial markets and upholding the EU single market for the free movement of services and capital.

Ms. McGuinness also proposed expanding the scope of financial supervision to tech firms moving into the fintech and payments services sector, for example Facebook’s “Libra” currency, and adverted to the risk of an unregulated shadow banking sector emerging. More active and effective supervision to avoid situations like Wirecard emerging was identified by Ms. McGuinness as a key priority, alongside better informing and protecting citizens about financial products through Country by Country reporting, which faces opposition from Member States.

In the broader framework of the EU’s “open strategic autonomy”, which she defined in her written answers as the ability to reap the benefits of international trade while protecting against unfair actions by third-parties, Ms. McGuinness identified three interlinked priorities: Strengthening Economic and Monetary Union by completing Banking Union and Capital Markets Union, raising the international profile of the euro currency and developing an effective sanctions policy. Beyond stated support for the aims of a “Geopolitical Commission” and the rules-based multilateral order, there was little in terms of concrete proposals on how this could be achieved in her remarks. In response to a question on Basel III bank capital requirements and the competitiveness of EU banks versus their American counterparts, Ms. McGuinness pushed back and said these prudential measures had actually strengthened the EU’s ability to weather the COVID-19 pandemic and that these regulations were part of the EU’s multilateral commitments.

While Brexit was not mentioned by name in President von der Leyen’s mission letter, the full and timely implementation of the Withdrawal Agreement and securing an ambitious and strategic future partnership between the EU and the UK did feature. Given the considerable size and influence of the City of London for financial services, Ms. McGuinness’ proposed Commission brief touches directly on this key issue of financial services for the future EU-UK relationship. She noted the European Commission’s agreement to an 18-month extension to allow financial market actors to reduce their dependence on London-based central counterparties (CCPs) and to build up financial services infrastructure in the EU. Ms. McGuinness framed this as key to maintaining financial stability as a prudential measure in the face of uncertainty over potential UK regulatory divergence, as well as feeding into the Commission’s broader policy of “strategic autonomy”.  As Ireland could be one of the beneficiaries of any financial services’ exodus from London into the EU, this could prove to be an economic windfall for the Irish exchequer.

On the issue of Ms. McGuinness’ impartiality as Commissioner for financial services, and the number of Irish nationals in key EU finance roles – including the Eurogroup President, Paschal Donohoe, and the ECB Chief Economist, Phillip Lane – she dismissed the notion of an Irish “conspiracy”. If elected, Ms. McGuinness stressed that she would be a “European” Commissioner first and foremost and would “strongly support” the European Commission’s effort for “a community approach to taxation”. Taxation does not fall under Ms. McGuinness’ proposed portfolio, but any changes to how financial services and transactions are taxed, including activities by tech firms moving into digital payments services and a proposed financial transaction tax, would have serious implications for Ireland’s current economic model.

In the hearing leading up to her appointment, Ms. McGuinness gave a confident and self-assured performance and displayed a robust command of her prospective portfolio. Throughout her remarks and her answers to questions from MEPs, Ms. McGuinness underscored three intertwined themes.

First, that the issue of financial stability and financial services has direct impacts on businesses, society and citizens, not just financial markets or firms, and that as Commissioner, Ms. McGuinness would “put people front and centre”.

Second, the need for a financial system that takes people and the environment into consideration and that is able to take advantage of the digital opportunities afforded to it.

Finally, that she would bring her parliamentary experience and perspective as an MEP with her to the European Commission. Commissioner McGuinness informed the ECON Committee that having a Parliamentarian in the European Commission would be a “bonus” and that she would involve the institution in her deliberations and work. Ms. McGuinness concluded her hearing by referring to the work of the late John Hume – not only in fighting for peace in Northern Ireland, but in his pivotal role in the credit union movement in Derry – and the importance of values-driven finance for social inclusion which she will take as her inspiration for her portfolio.