In his address, Professor Goodwin drew on analysis from his latest book outlining what lies behind the rise of these movements and what is likely to happen next in many democracies across the West.

This address was part of a series of talks on Populism and the Challenges to the Liberal Order, co-hosted by Trinity College Dublin and the IIEA.

Across the West, there is a rising tide of people who feel excluded, alienated from mainstream politics, and increasingly hostile towards minorities, immigrants and neo-liberal economics. Many of these voters are turning to national populist movements, which have begun to change the face of Western liberal democracy, from the United States to France, Austria and the UK. In his address, Professor Goodwin drew on analysis from his latest book outlining what lies behind the rise of these movements and what is likely to happen next in many democracies across the West.

Matthew Goodwin has been a Professor of Politics and International Relations at Rutherford College, University of Kent since 2015. He is also a Visiting Senior Fellow at the Royal Institute of International Affairs, Chatham House and a Senior Fellow at the think tank ‘UK in a Changing Europe’. He is the author of six books, including his latest with Roger Eatwell, National Populism: The Revolt Against Liberal Democracy. Prior to his academic career, he served as a member of the UK government’s working group on anti-Muslim hatred, working alongside policy-makers on extremism and integration issues. In 2018, he was named a ‘European Young Leader’ by Friends of Europe. 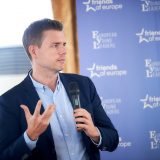