This blog discusses the outcome of the EU Social Summit, which took place in Porto on 7 May 2021. 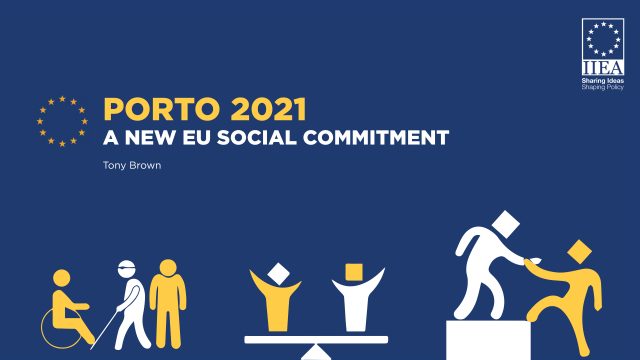 On 7 May 2021, the Portuguese Presidency of the Council of the EU convened a Social Summit, bringing together the Council, the European Commission, the European Parliament and the European social partners – the EU’s main confederation of trade unions, as well as organizations representing employers, industry groups and broader civil society.

Announcing the Presidency initiative, Prime Minister, António Costa had argued that: “We need a common commitment to make the European Pillar of Social Rights a reality and that is why we intend to gather EU leaders, institutions, social partners and civil society at the Porto Social Summit. The social dimension of the EU is absolutely key to ensure that the double transition our societies need is fair and inclusive, leaving no one behind”

Commission President, Ursula von der Leyen, had commented that: “Europe is about people. It’s about the workers, the small businesses. It’s about opportunities for the young generation. It’s about solidarity in times of crisis. This is why the Social Summit in Porto, in May, is so important. We will send a very strong political signal: the European Union fosters a recovery that puts people and their well-being at the centre.”

The participants in the Social Summit signed up to the three 2030 headline targets set in the Commission’s European Pillar of Social Rights Action Plan, published in March 2021:

This commitment was accompanied by a pledge to do the utmost to build a more inclusive, more social Europe and to transform the principles of the Pillar Action Plan into reality by concerted moves towards a strong, fair and job-rich recovery.

Prime Minister Costa, said: “Today, we came to the conclusion that we will only have more prosperous and fairer societies if, along with meeting the climate and digital goals we have set ourselves, we implement our Social Pillar”.

The Social Summit issued a lengthy document, the Porto Social Commitment, recalling the 20 principles of the European Pillar of Social Rights, proclaimed in 2017 at the Gothenburg Social Summit for Fair Jobs and Growth, and stated that they remain a compass to guide us towards a strong, sustainable, inclusive recovery and towards upward economic and social convergence. It welcomed the European Pillar of Social Rights Action Plan and called on “all relevant actors” to take on the lessons of the pandemic and to join their efforts “using the most suitable instruments, while respecting the principle of subsidiarity and limiting the administrative burden on small and medium-sized companies.”

EU Member States were urged to set ambitious national targets which constitute an adequate contribution to the achievement of the European targets and concluded that the extraordinary resources made available to support Europe’s recovery are a chance that cannot be missed to progress towards better implementation of the necessary reforms at the national level in line with the Social Pillar principles and goals.

It also drew attention to the importance of engaging and debating on how to strengthen the social dimension of Europe with all citizens and the social partners in the context of the Conference of the Future of Europe which was launched on 9 May 2021.

Commenting on the outcome of the Social Summit, the President of the European Council, Charles Michel, pointed to the EU’s capacity to ensure that society throughout Europe offers real and equal opportunities and to innovate, develop, and to look forward to the future with ambition. He added that despite the patchwork of different situations in each member state that European values, the rule of law, freedom, equality between women and men, the fight against discrimination, the protection of minorities unite all European.

He praised the efforts made by the social partners, who looked beyond their differences and suggested that we should assess the impact of joint decisions not just in terms of GDP, but using other criteria such as access to education, quality of the environment, curbing discrimination, capacity for innovation, development and future prosperity.

On the following day, 8 May 2921, the European Council held an important EU-India Leaders’ Meeting and an informal Council meeting, which featured an exchange with Prime Minister Modi, opening a new chapter in the relationship between the world’s two largest democracies which, it was argued, can benefit EU and Indian citizens, the Indo-Pacific region and the wider world.

The informal European Council produced a substantial Declaration which noted the adoption of the Social Commitment meant that the European Union was taking one more step in the direction of a more social Europe.

The Declaration stated that, in line with the EU Strategic Agenda 2019-2024, the EU is determined to continue deepening the implementation of the European Pillar of Social Rights at EU and national level, with due regard for respective competences and the principles of subsidiarity and proportionality. It welcomed the European Pillar of Social Rights Action Plan which set out a menu of targets for all relevant actors and urged them to limit the burden on SME’s:

We are committed to (i) reducing inequalities, (ii) defending fair wages,(iii) fighting social exclusion and (iv) tackling poverty, (vi) taking on the objective of fighting child poverty and (vii) addressing the risks of exclusion for particularly vulnerable social groups such as the long-term unemployed, the elderly, persons with disabilities and the homeless. We will (viii) step up efforts to fight discrimination and (ix) work actively to close gender gaps in employment, pay and pensions, and(x) to promote equality and fairness for every individual in our society, in line with fundamental principles of the European Union. (xi0 We will prioritise action to support young people, who have been very negatively affected by the COVID-19 crisis, which has profoundly disrupted their participation in the labour market as well as their education and training plans.

In a highly publicised move, the Hungarian and Polish leaders – Viktor Orban and Mateusz Morawiecki – insisted on the removal of the phrase “promote gender equality” from the text of the Porto Declaration. The phrase was replaced by “work actively to close gender gaps […] and to promote equality.” Viktor Orban said he was against speaking of “gender equality” which he considered “an ideologically motivated expression”.

A Step in the direction of a more social Europe

Looking back over the five decades since the adoption in December 1973 of the European Social Action Programme, tabled by Ireland’s first European Commissioner, Dr Patrick Hillery, it is clear that economic considerations have always proved dominant in Brussels policy debates, but that the recognition of the need for a genuine social dimension, and for its realisation, has never disappeared. Significant initiatives, often inspired and promoted by leaders such as Jacques Delors – and latterly, Ursula von der Leyen – have been launched and have resulted in real progress in key areas.

To realise important goals the EU undertakes specific social policy initiatives. However, the application of the principle of subsidiarity means that the EU can act only in areas where the individual Member States cannot act effectively alone. In the broad field of social policy, therefore, the EU has significantly less power than is the case in areas such as agriculture. The Treaty on the Functioning of the European Union refers to this division of powers as ‘shared competence’ between Union and its Member States in the field of social policy.

In practice, the EU can promote and achieve harmonisation across the EU in many situations but does not have competence in respect of the elements of social legislation which remain within the competence of the individual Member States; and there is continuing resistance from some Member States to increasing the power of the EU institutions over social welfare policies.

The Coronavirus pandemic has highlighted a specific example of the competences issue insofar as primary responsibility for health protection, healthcare systems and medical care lies within the competences of individual member states. However, Treaty provisions give the EU a role to play in improving public health, a role which has evolved over time particularly as a response to the free movement of people and goods in the internal market. A recent survey in Europe is quoted as indicating that as many as two-thirds of respondents said that “the EU should have more competences to deal with crises such as the Coronavirus pandemic”.

Debates on these questions will continue and the Commission’s commitment to the Pillar of Social Rights will challenge national political positions. However, European Council President Michel concluded his remarks in Porto by saying that the Conclusions which were

validated unanimously by the Heads of State and Government indicate that the European Council will accord the highest priority to the Union’s social ambitions.