Minister for Foreign Affairs and Minister for Defence, Simon Coveney, delivered a ‘State of the Union’ address to the IIEA on Thursday, 13 May 2021, in which he examined the state of the European Union as it recovers from the COVID-19 crisis. 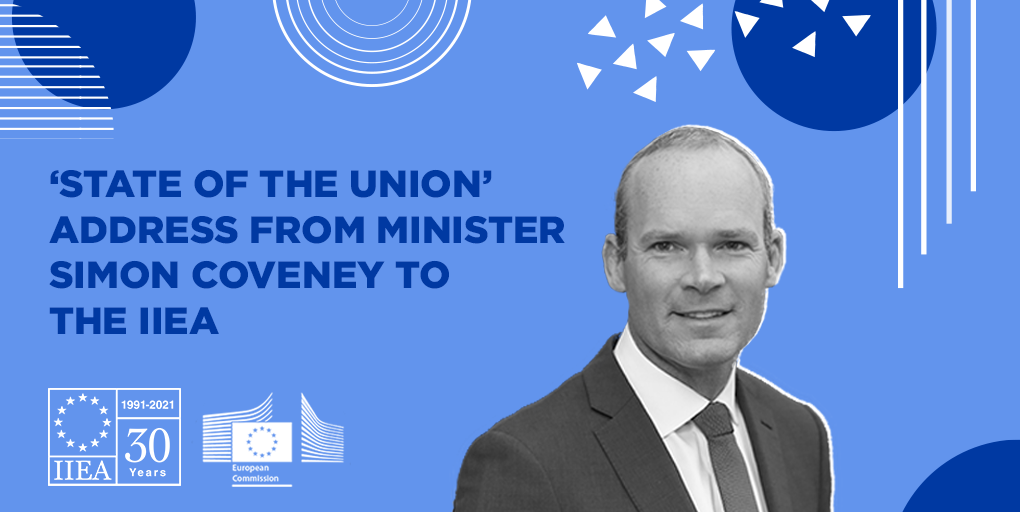 The State of the Union
Minister Coveney commenced his address to the IIEA by noting how the EU has been buffeted by a series of rolling crises over the last twelve years, from the financial crisis, to Russia’s annexation of Crimea, terrorist attacks, Brexit, political populism, the challenges posed by the Trump administration and most importantly, the COVID-19 pandemic.

The Minister contended that there is a need to acknowledge the EU’s shortcomings in facing these challenges. He outlined how the Union’s response to each of these developments has not been without error, for example, the inability of Member States to agree on a coherent policy response to migration and the challenges around border security. Notwithstanding such obstacles, the Minister commented upon the remarkable resilience demonstrated by the EU in response to these crises.

In surveying the global COVID-19 landscape and preparing for recovery, the Minister’s message was unequivocal – the EU of 2021 is not a distant or remote construct but a vital expression of our shared values and is essential to our collective progress. Quoting John Hume, the Minister pointed to the EU as the world’s greatest example of peace and reconciliation.

Minister Coveney noted how the EU facilitates and drives economic opportunities for hundreds of millions of citizens, rooted in a commitment to social inclusion and respect for diversity. He further hailed the EU as a world leader in ambitious and sustainable climate policy and a global champion on multilateralism, respect for human rights and the rule of law, which ensures that citizens can expect and enjoy the highest levels of health, safety and environmental standards.

Minister Coveney emphasised the importance of introspection and questioning whether the EU is a force for good in the world, or if it is falling short in the projection of its values globally because of internal differences and competing interests.

The Minister contended that to be credible in promoting universal values of democracy, rule of law, human rights, the EU Charter on Fundamental Rights, and international law beyond the Union, there must be full respect for these values within the Union itself. He also expressed concern about the erosion of the rule of law within some Member States.

The Minister welcomed the leadership that the Commission had shown, as guardian of the treaties, in establishing greater accountability on the rule of law. He added that no Member State is perfect, and all of us need to be open to scrutiny.

Applying a global lens, the Minister reflected that the EU’s principles and values are under threat in many parts of the world. Now is not the time, he argued, to shrink from these values, rather we need to be bold. During its tenure on the UN Security Council (UNSC), Ireland can play an important role in this regard.

The Minister noted the times when the Union has failed to take action, for example on Israel/Palestine. He outlined how he would like to see Member States show more willingness in their actions to achieve a more geopolitical Union so that the EU can be more strategic in terms of how it can positively influence the course of international events.

Ireland’s Evolving Relationship with the EU

Minister Coveney observed how in the past Ireland approached membership of the EU in a manner that was somewhat transactional. However, that time is long past; modern Ireland embraces the case for making a future as a strong, dynamic and vibrant Europe, a Europe that is flexible and capable of responding to the challenges of our time.

The Minister stated that Ireland’s place in Europe provides the cultural context for our modern and confident national identity. In a country where a sense of place is so deeply ingrained, Irish people are very at ease with an identity that is both proudly Irish and European.

It is widely agreed that the unprecedented challenges posed by COVID-19 have changed our expectations of institutions such as the EU. Issues around citizens’ health care and wellbeing were until recently considered a peripheral aspect of the Union’s actions; the pandemic has thrust these issues onto centre stage.

Minister Coveney argued that the historic agreement in July 2020 for a €1.8 trillion EU budget through the Multiannual Financial Framework and the Next Generation EU package, underscores the EU’s capacity to come together to respond to a once in a generation challenge. Furthermore, he indicated that Ireland will receive €950m in 2021 and 2022, with further support thereafter. Ireland will use this money to advance the green transition, digital transformation and to support economic recovery and job recovery.

In recognising the global nature of the pandemic, the EU has mobilised over €40 billion to help partners worldwide in the most vulnerable countries in the fight against COVID-19. On the issue of COVID-19 vaccines, the Minister outlined his belief that it is not morally acceptable that intellectual property should prevent the expansion of vaccine manufacturing globally. However, he added that a TRIPS waiver alone would not solve the issue overnight, as manufacturing vaccines is a very technical process and there is also a need to share the know-how.

Minister Coveney commented on the spirit of solidarity and inclusiveness which was evident during the Social Summit in Porto on 7 and 8 May 2021 and the renewed commitment expressed to Social Europe and the European Pillar of Social Rights.

The Minister said that Ireland’s approach to strategic autonomy was to build on the Single Market and EU principles of openness, multilateralism and competition, rather than looking inwards or erecting barriers. He argued that much of the recent debate on strategic autonomy has been informed by experience of the pandemic. However, he stated that resilience requires us to focus on preparing for future crises which may pose different challenges.

Conference on the Future of Europe

The Minister welcomed the Conference on the Future of Europe (COFE) as an opportunity to engage citizens in charting the future course for the Union. He outlined his ambition to see an inclusive conference with citizen engagement to the forefront, with less of a focus on inter-institutional debates which often suggest that the EU is out of touch with its citizens. The Minister noted that Ireland has a strong track record of citizen engagement through dialogues and assemblies.

The Minister focused on 3 challenges facing Ireland due to Brexit: Fisheries, haulage and import/export.

On the Protocol on Northern Ireland, Minister Coveney noted that it remains both the framework and the only available solution to avoiding a hard border on this island, while protecting the gains of the peace process, the integrity of the Single Market and Ireland’s place within it. The Minister insisted that the cause of the disruption is not the Protocol but Brexit itself – the protocol is about limiting that disruption.

Minister Coveney cautioned against unilateral actions and expressed concern over the repeated pattern of such actions by the British Government and urged partnership in the months ahead.

The Minister warmly welcomed the revitalisation of the EU-US relationship and he interpreted President Biden’s intention to attend the EU summit in June 2021 as a signal of intent. He added that Ireland could play a big a role in developing structured cooperation between the EU and US.

The Minister underlined the importance of building institutional connectivity, and not just relying on political personalities, in creating a lasting transatlantic partnership. He cited the JCPOA as a good example of this, with negotiations in Vienna taking on momentum.

On corporation tax, the Minister outlined that the Irish Government wants to work through the OECD process, and does not want Europe doing its own thing in taxation of the digital economy. If an agreement can be reached at an OECD level, Ireland will have to accept this compromise and make it work.

Minister Coveney clarified Ireland’s stance on the current Israel/Palestine conflict: it advocates for a two-state solution, for a negotiated peace agreement that delivers a parity of esteem to both sides and ensuring that breaches of international law are called out when they occur. The Minister was unequivocal that settlements in Occupied Palestinian Territory and the demolition of peoples’ homes in Occupied Palestinian Territory are illegal.

He stated that there is a clear obligation under international law to make a distinction between civilians and children, and targets that are legitimate in the context of a country having the right to defend itself. He emphasised that a renewed focus on agreed UN and UNSC resolutions is needed and a peace process that is fair to both sides with the objective of putting an agreement in place around a two-state solution.

The Minister highlighted the importance of the EU-UN partnership in addressing crises and noted that without multilateral cooperation in fora such as the EU and UN, Ireland would have no influence. He said that the EU’s instrumental role in returning to Iran’s full implementation of the Iran nuclear deal is another example of this, and he added that Ireland is playing an important role as facilitator on this resolution at the UNSC.

The Minister emphasised that Ireland is engaged in shaping a more coherent and ambitious political partnership between the EU and Africa. His reasons for this were twofold, first, that as neighbouring continents, the prosperity of the EU and Africa are deeply entwined, and second, that climate change and population growth are going to fundamentally shape this relationship.

In conclusion, the Minister remarked that the EU has demonstrated considerable strength in the face of adversity. He cautioned however that the Union remains fragile, as a community of laws and values in a world of increasingly polarised views and division. He said that boldness and ambition will be required to develop the post-pandemic EU, and highlighted that the imagination of the younger generation will be pivotal in this context.

The Role of Think Tanks in the Age of Misinformation