This blog seeks to evaluate the progress of EU strategic autonomy in the context of how EU Foreign Ministers addressed recent geopolitical crises at the Gymnich meeting in Berlin. 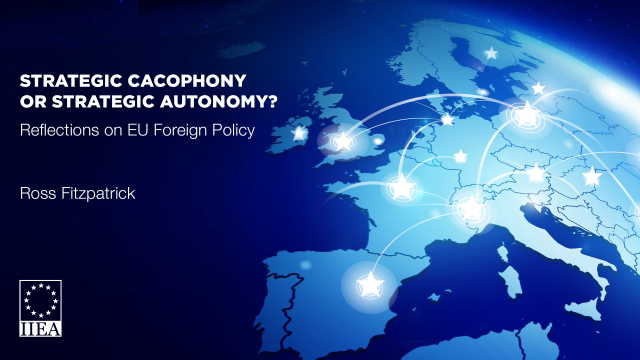 In the context of Germany’s Presidency of the Council of the European Union, the biannual informal meeting of EU Foreign Ministers, also known as the Gymnich meeting, took place in Berlin on 27-28 August 2020.

The Gymnich meeting is hosted by the Member State holding the rotating Presidency of the Council of the European Union. Such meetings present an opportunity for EU Foreign Ministers to discuss the most pressing foreign policy and security matters facing the Union in an informal setting. The key difference between official Council meetings is that no formal decisions or legal acts are adopted at Gymnich meetings, affording wider scope for debate and discussion. The meeting in Berlin was hosted by Germany’s Foreign Minister Heiko Maas and chaired by the High Representative of the EU for Foreign Affairs and Security Policy and Vice-President of the Commission, Josep Borrell.

In the context of recent geopolitical upheavals across the globe, referred to by High Representative Borrell as a ‘summer of crises’, a broad range of foreign and security policy issues of strategic importance to the Union were addressed, including the ongoing situation in Belarus, EU-Turkey relations and EU-Russia relations. The ability of the EU to overcome internal differences that have too often prevented it from taking cohesive geopolitical action will be a key sticking point in moving beyond political rhetoric and achieving strategic autonomy on the global stage.

The remainder of this blog seeks to provide a summary of the main outcomes of the recent Gymnich meeting and potential implications for the future direction of the EU’s foreign and security policy under the wider goal of achieving EU strategic autonomy on the international stage.

On the situation in Belarus, High Representative Borrell reiterated that the EU does not recognise the election results as legitimate and condemned the ongoing violent repression of civil society by the security forces. He further emphasised that an OSCE facilitated dialogue was the most appropriate vehicle for dealing with the matter at this time.

On 24 August, Taoiseach Micheál Martin spoke with Belarusian opposition leader Svetlana Tikhanovskaya and expressed “Ireland’s solidarity with her and with the people of Belarus in their pursuit of democracy and human rights.” Ireland further committed to supporting the quickest implementation of the actions announced by the European Union in support of Belarus, in particular the re-programming of €53m in Eastern Partnership funds directed to civil society and vulnerable groups.

German Foreign Minister and host of the informal meeting, Heiko Maas, called on the EU to exert its influence in showing solidarity with Belarus, saying: “if Lukashenko increases pressure on peaceful civil society, the EU must increase pressure on him.” EU Foreign Ministers signalled their support for this sentiment by reaching a political agreement to designate selected individuals responsible for coordinating the fraudulent elections and subsequent violent crackdown under the existing Belarus sanctions regime. High ranking political officials are among those to be included in this designation. Expected to be adopted at the next Council meeting in September, these targeted sanctions received further backing from 11 Council members who signed a letter calling for the adoption of such measures as soon as possible.

In light of increasing tensions in the Eastern Mediterranean as a result of Turkish drilling for contested gas reserves, High Representative Borrell expressed strong solidarity with Cyprus and Greece and called on Turkey to abstain from unilateral actions that threatened an already fraught relationship with the EU.

Recent events are the latest in a series of calculated foreign policy actions taken by Turkey that have served to further sow distrust with the EU yet have thus far not led to concrete consequences. Earlier this year, President Recep Tayyip Erdogan reneged on the 2016 EU-Turkey deal by opening Turkey’s western borders to allow thousands of migrants to pour into Greece, leading to widespread altercations with Greek border patrols.

Acknowledging the growing frustration among EU leaders at Turkish behaviour, High Representative Borrell took the opportunity to reiterate his vision for strengthening EU strategic autonomy in foreign and security policy matters. He added that in dealing with Turkey the EU must “walk a fine line between preserving a true space for dialogue and at the same time showing collective strength in the defence of our common interests.”

Despite calls for increased dialogue, EU Foreign Ministers reached a political consensus to request relevant Council working groups to expedite their work in order to add individuals designated by Cyprus to the existing sanctions regime. High Representative Borrell noted that in the absence of progress in EU-Turkey relations, the development of further restrictive measures at the next Council meeting on 24 September would be a real possibility.

EU foreign ministers also took stock of EU-Russia relations in the context of the Five Guiding Principles agreed in June 2016. German Foreign Minister Heiko Maas acknowledged the ‘dark clouds’ hanging over the current relationship with Russia in reference to the recent poisoning of Russian opposition leader Alexei Navalny, confirmed by Chancellor Angela Merkel on Wednesday 2 September 2020 to have been carried out with the novichok nerve agent.

EU leaders will undoubtedly be wary of the potential of the Navalny case to further destabilise an already fragile relationship with Russia. How the EU responds will be a key indicator of the extent to which policymakers are willing to go in order to improve resilience to Russian threats, both economic and military, in pursuit of strategic autonomy. Arguably, the current moment is a critical juncture for the determination of future EU relations with Russia. German Foreign Minister Haas has called for the EU to adopt a “principled, more active, and more interest-driven policy on Russia than in the past.” Yet, exactly what shape a ‘principled, more active, and more interest-driven policy’ will take is far from an agreed upon position among Council members at this stage.

How the EU responds to the complex and multifaceted crises that have dominated the headlines over the summer months will be a key litmus test for evaluating the progress of European strategic autonomy as the overarching policy objective of Commissioner Von der Leyen’s new ‘geopolitical Commission’.

High Representative Borrell has been consistent in placing EU strategic autonomy at the top of his agenda and outlined his belief that “Europe should position itself as a ‘partner of choice’ to others […] Principled, but not dogmatic; Open, but not weak; Progressive but not naïve; Ready to act multilaterally whenever we can and autonomously if we must.”

Failure to act decisively on these multiple fronts has the potential to further undermine an already weakened EU foreign and security policy that has seen sizeable cuts to its budget under the framework of the ‘Next Generation EU’ package, particularly in the areas of security and defence.

The herculean task of strengthening Europe’s leadership role in an increasingly competitive geopolitical order, while operating under tight budgetary constraints, is exactly what the EU must achieve if it is to counteract Russian intervention in Belarus and further Turkish unilateral action in the Eastern Mediterranean. In any case, the coming months will be crucial for determining whether the EU’s policy of strategic autonomy has any teeth.