The first day of Spring saw the European Commission President, Jean-Claude Juncker, launch a White Paper on the Future of Europe, subtitled ‘Reflections and Scenarios for the EU27 by 2025’. This is the EU executive’s contribution to the debate which will take place at the special European Council meeting in Rome on 25 March celebrating the 60th anniversary of the signing of the Treaty of Rome in 1957. 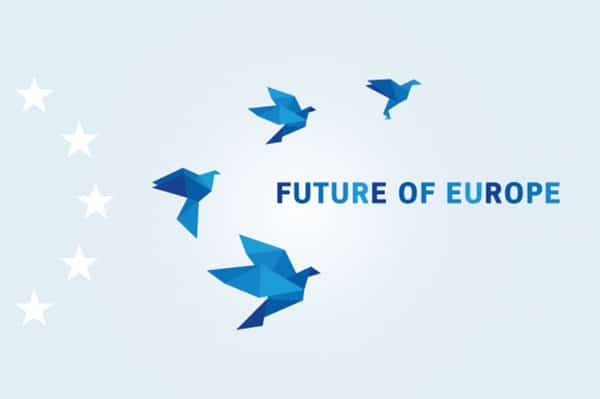 The first day of Spring saw the European Commission President, Jean-Claude Juncker, launch a White Paper on the Future of Europe, subtitled ‘Reflections and Scenarios for the EU27 by 2025’. This is the EU executive’s contribution to the debate which will take place at the special European Council meeting in Rome on 25 March celebrating the 60th anniversary of the signing of the Treaty of Rome in 1957.

The White Paper on the Future of Europe

As the European Union continues to face challenges across multiple policy areas, this special meeting of the European Council is seen as an opportunity for the EU to open a new chapter in its history and to determine its own destiny in an increasingly multipolar world. In particular, as President Juncker writes in his foreword to the paper, the meeting will allow the EU27 leaders to demonstrate their unity – an achievement that many would have considered unthinkable sixty years ago.

In this context, the White Paper is the European Commission’s contribution to formulating a new path for the European Union, by mapping the challenges and opportunities ahead and assessing how the Union can collectively respond.

President Juncker states in the foreword of the White Paper:

Europe has always been at its best when we are united, bold and confident that we can shape our future together. The European Union has changed our lives for the better. We must ensure it keeps doing so for all of those that will follow us.

The main text of the White Paper is introduced with a seminal quotation from Robert Schuman’s historic statement of 9 May 1950:

The EU is described as a place where Europeans can enjoy a unique diversity of culture, ideas and traditions; where they have forged life-long bonds with other Europeans and can travel, study and work across national borders without changing currency; where the rule of law has replaced the rule of the iron fist; where equality is not just spoken about but continues to be fought for.

However, the paper notes that many Europeans have begun to question the benefit of European citizenship for their daily lives, as they see the EU and its institutions as either too distant or too interfering. For many, the EU fell short of their expectations, as it struggled to cope with crises on multiple fronts.

Although Europe’s economy is recovering from the global financial crisis, the EU continues to face ongoing complex challenges. Destabilisation in Europe’s neighbourhood has resulted in the largest refugee crisis since World War II. Terrorist attacks have struck the heart of Europe’s cities. New global powers are challenging the established geopolitical reality. The UK decision to leave the EU has brought into question the future of European integration.

Recognising that many of the changes and challenges are inevitable and irreversible while others are harder to predict and will come unexpectedly, the paper argues that: “Europe can either be carried by those events or it can seek to shape them. We must now decide.”

The White Paper then presents five scenarios designed to help steer a debate on the future of Europe. They offer a series of glimpses into the potential state of the Union by 2025 depending on the choices we will jointly make. All five are based on the principle that the 27 Member States move forward together as a Union. They are illustrative in nature, designed to provoke reflection, and are not detailed blueprints or policy prescriptions. They reject the tendency to see Europe’s future as a binary choice between more or less Europe, an approach seen to be misleading and simplistic.  The five Scenarios are:

Scenario 1: Carrying On – The EU27 focuses on delivering its positive reform agenda in the spirit of the Commission’s New Start for Europe from 2014 and of the Bratislava Declaration agreed by all 27 Member States in 2016.

Scenario 2: Nothing but the Single Market – The EU27 is gradually re-centred on the single market as the 27 Member States are not able to find common ground on an increasing number of policy areas.

Scenario 3: Those Who Want to Do More – The EU27 proceeds as today but allows willing Member States to do more together in specific areas such as defence, internal security or social matters. One or several ‘coalitions of the willin’ emerge.

Scenario 5: Doing Much More Together – Member States decide to share more power, resources and decision-making across the board. Decisions are agreed faster at European level and rapidly enforced.

The paper sees the possibilities ranging widely and concedes that there are many overlaps between the scenarios and they are therefore neither mutually exclusive, nor exhaustive. The EU27 are invited to decide together which combination of features from the five scenarios they believe will best help advance our project in the interest of our citizens.

The White Paper marks the beginning of a process for the EU27 to decide on the future of the Union. To encourage this debate, the European Commission, together with the European Parliament and interested Member States, will host a series of ‘Future of Europe Debates’ across Europe’s cities and regions.

The European Commission will contribute to the debate in the months to come with a series of reflection papers offering different ideas, proposals, options or scenarios for Europe in 2025 without presenting definitive decisions at this stage. The papers will cover five areas: developing the social dimension of Europe; deepening the Economic and Monetary Union; harnessing globalisation; the future of Europe’s defence; and the future of EU finances.

conclusions from the series of ‘Future of Europe Debates’ and from responses to the reflection papers. Then, the European Council meeting in December will, in President Juncker’s words, “seek to decide on a course of action to be rolled out in time for the European Parliament elections in 2019.”

The White Paper concludes that change may be inevitable, but European values remain the same. Europeans want to live in a society ruled by law where peace, freedom, tolerance and solidarity are placed above all else and where democracy with a diversity of views and a critical, independent and free press are protected. Europeans want a society where all citizens are treated equally, and where they can create a better life for their children than they had for themselves.

There will be much debate about the content of the White Paper and, in particular, about the five scenarios. It is however clear, from preliminary political and media comments, that attention will be concentrated on the meaning and implications of Scenario 3 – Those Who Want to Do – which can only be seen as describing a ‘multi-speed’ Europe with the emergence of coalitions of the willing in key areas and perhaps coalitions of the unwilling in others.  Introducing the White Paper in the European Parliament, Jean-Claude Juncker said that he would not express a preference among the scenarios at this time, suggesting that his September State of the Union Speech in Strasbourg might see him taking a clearer position.