This new blog by Senior Fellow, Tony Brown, examines the European Commission’s Action Plan for implementation of the European Pillar of Social Rights 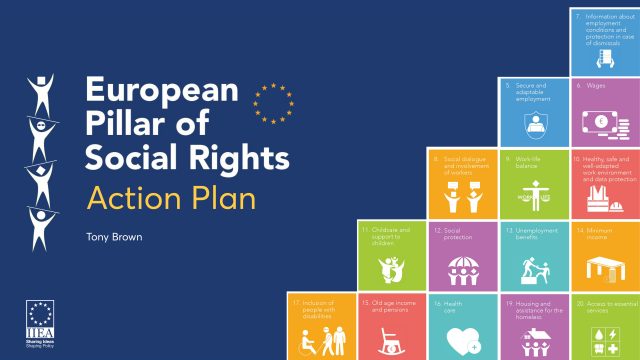 As the European Union continues its response to the COVID-19 pandemic, the European Commission has published an Action Plan for implementation of the European Pillar of Social Rights, originally launched in 2017.

In introducing the Action Plan, the Commission highlighted the strength of both national and EU-level efforts to confront pandemic, claiming that they had been successful in limiting the employment and social consequences. European solidarity had provided support for Member States to put in place a range of schemes and measures which helped to sustain employment, incomes, and the economy. “The same unity, coordination and solidarity will be needed also in the years ahead to bounce forward towards a greener and more digital decade in which Europeans can thrive.”

The President of the Commission, Ursula von der Leyen, speaking in the European Parliament, argued that “as we overcome the pandemic, as we prepare necessary reforms and as we speed up the twin green and digital transitions, I believe it is time to also adapt the social rulebook. A rulebook which ensures solidarity between generations. A rulebook that rewards entrepreneurs who take care of their employees. Which focuses on jobs and opens up opportunities. Which puts skills, innovation and social protection on an equal footing.”

Reflecting the President’s remarks, the Action Plan underlines the concept of the ‘social rulebook’ and argues that “although in varying degrees, the challenges ahead are similar across all Member States, we need to enhance social rights and to strengthen the European social dimension across all policies of the Union as enshrined in the Treaties. This will ensure that the transition to climate-neutrality, digitalisation and demographic change are socially fair and just, making the European Green Deal and the upcoming 2030 Digital Decade successes for all Europeans.”

The Commission describes the twenty principles of the European Pillar of Social Rights as “the beacon guiding us towards a strong Social Europe and setting the vision for our new ‘social rulebook’. They express principles and rights essential for fair and well-functioning labour markets and welfare systems in 21st century Europe.” The Pillar reaffirms key fundamental principles while setting out a programme to address the evolving challenges of social, technological and economic change. The effective implementation of the Pillar clearly depends on the commitment of the EU Member States who, in terms of formal treaty competence, have primary responsibility for critical employment and social policies. However, targeted action at EU level can play an important part in complementing national efforts.

The Action Plan, which runs to almost fifty pages, contains detailed policy objectives to fully implement the principles of the Pillar by concentrating on areas in which urgent attention is needed in both the current context and in the longer term, “building a stronger Social Europe by 2030 for the benefit of all Europeans.”

The Commission proposes three EU headline targets to be achieved by the end of the decade in the areas of employment, skills, and social protection, consistent with the UN Sustainable Development Goals. The targets reflect key economic forecasts, evidence of the impact of the COVID-19 crisis and relevant past experiences, such as those related to the global financial crisis.

At least 78% of the population aged 20 to 64 should be in employment by 2030. The impact of COVID-19 has halted a six-year phase of positive employment progress, with an employment rate of 72% in the third quarter of 2020.

At least 60% of all adults should participate in training every year, to achieve employment opportunities and ability and ensure necessary digital upskilling. A target of 80% of those aged 16-74 should have basic digital skills.

The number of people at risk of poverty or social exclusion should be reduced by at least 15 million by 2030. While poverty in the EU had declined in the last decade more than 90 million –including 18 million children – remained at risk of poverty last year.

The Action Plan contains details of the commitment to make a “concerted effort – with the involvement of all levels of governance, social partners and other actors – to fully implement the Social Pillar principles.”

The Plan lists as many as thirty actions, initiatives and publications to be undertaken in 2021. They are grouped under three headings:

More and Better Jobs: including an Action Plan on the Social Economy; a Regulation on AI; Report on the Working Time Directive; evaluation of European Labour Authority activity on implementation and enforcement of labour mobility rules.

Skills and Equality: including a proposal for a Transformation Agenda for Higher Education; a Skills and Talent package; Joint Report on application of the Employment Equality Directive and the Racial Equality Directive; Legislation to combat gender-based violence against women.

Social Protection and Inclusion: including a Council recommendation on Minimum Income; a European Platform on Combating Homelessness and an Affordable Housing Initiative; a EU report on access to essential services.

The Plan concludes that “Delivering on the European Pillar of Social Rights is a shared political commitment and responsibility of the EU institutions, national, regional and local authorities, social partners and civil society, all having a role to play in line with their competences.”

Under the Portuguese Presidency of the Council a Social Summit will be held at Porto in May 2021. This will be an occasion for EU Heads of State or Government, EU institutions, social partners and other key stakeholders to renew their commitment to implement the Pillar.

The European Pillar Action Plan constitutes the Commission’s contribution to the Porto Social Summit. The Commission concludes that the Plan constitutes a timely call to “Member States, social partners and other relevant actors, such as regional and local authorities as well as civil society, to join in a collective endeavour to accelerate the implementation of the Pillar within their respective spheres of competence, and swiftly make its principles a reality. So that a strong Social Europe continues to be a model for the world.”