The Heads of State or Government of the EU27 met in the Maltese Capital, Valletta, on 3 February 2017 for a discussion on the future of the Union after Brexit. 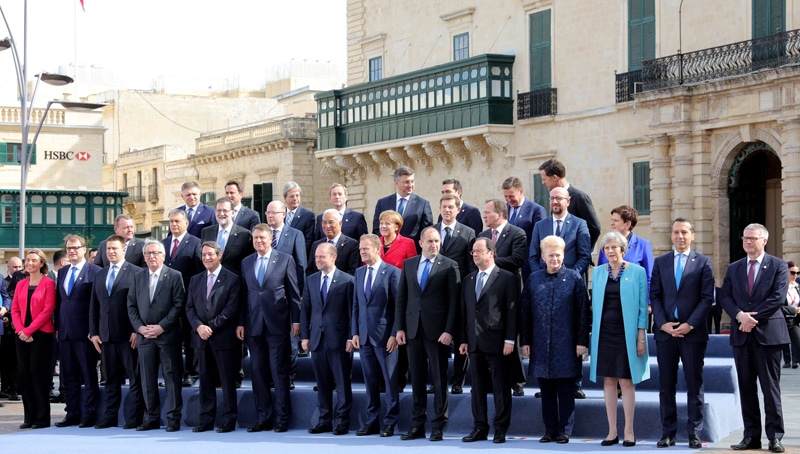 The Heads of State or Government of the EU27 met in the Maltese Capital, Valletta, on 3 February 2017 for a discussion on the future of the Union after Brexit. The discussions built upon the political reflection launched immediately after the UK voted to leave the European Union on 23 June 2016 and which continued at an informal summit meeting in Bratislava on 16 September 2016.

The session followed a formal meeting of the leaders of the EU28 which addressed the external aspects of the on-going migration situation in the Eastern Mediterranean. The meeting adopted the Malta Declaration, an agreement on immediate operational measures to stem irregular migration, as well as preventing the loss of lives on the Central Mediterranean route.

The meeting also addressed the future of EU-US relations following the inauguration of President Tusk and heard Prime Minister May’s indication of her Government’s approach to triggering Article 50.

In advance of the meeting, the President of the European Council, Donald Tusk, wrote to the 27 Heads of State or Government, identifying three main challenges currently facing the European Union.

President Tusk argued that the Union must look to the future, but that the reasons for the EU’s existence should not be forgotten:

It must be made crystal clear that the disintegration of the European Union will not lead to the restoration of some mythical, full sovereignty of its member states, but to their real and factual dependence on the great superpowers: the United States, Russia and China. Only together can we be fully independent. We must therefore take assertive and spectacular steps that would change the collective emotions and revive the aspiration to raise European integration to the next level. In order to do this, we must restore the sense of external and internal security as well as socio-economic welfare for European citizens.

Towards Rome on 25 March

The meeting of the EU27 leaders was devoted to preparation for the upcoming 60th anniversary of the signing of the Treaty of Rome on 25 March 2017.

A leaked ‘concept paper’ for the meeting, drawn up by the European Council Presidency in cooperation with the Italian Government, warned that the EU was at a historical turning point, experiencing dramatic challenges both from within and outside:

… externally, globalisation based on cooperation and competition is giving way to increasing rivalry, confrontation and even conflict, putting into question the fundamentals underpinning the rules-based international order.  We are also facing important internal challenges as exemplified by Brexit. In these times of global tectonic changes the EU needs strength and determination to keep unity and to better respond to the expectations of its citizens in the areas of security, economy and social inclusion.

President Tusk expanded upon these ideas in his remarks at the summit, noting that developments on the international scene should serve as a reminder of how important a strong EU is. He underlined the importance of transatlantic co-operation, calling it “a key pillar of the free world”. However, it is also clear that the Donald Trump presidency has changed the equation for President Tusk, and he went on to note that the EU has no other option today than to regain confidence in its own strength.

The newly elected European Parliament President, Antonio Tajani, also addressed leaders at the summit, saying that “Europe must be changed not killed”. He highlighted the imperative need for Europe today to explain better its work to the European citizens and to deliver more concrete solutions through more political and less bureaucratic processes.

The summit was, according to President Tusk, a constructive one, and in comments after the summit he once again underlined the importance of EU unity as the Member States prepared for the Rome summit. To support the preparations for that summit, the European Commission will also present a White Paper on the future of Europe, including proposals which will contribute to the long-term vision of the Union. The paper is expected to be published shortly before the meeting in March.

Background note to the Valletta Summit

What is The Bratislava Roadmap?

The leaders of the European Union 27, in Bratislava on 16 September 2016, adopted ‘The Bratislava Declaration’ which asserted that “Although one country has decided to leave the EU remains indispensable for the rest of us….” and it agreed ‘The Bratislava Roadmap.’

The Roadmap is a work programme, the beginning of a process to be advanced at coming meetings of the European Council and at a Europe of 27 summit in Malta in February with the March 2017 celebration of the 60th anniversary of the Rome Treaty rounding off the process and setting out orientations for the Union’s future.

Key Points from the Bratislava Roadmap

The Bratislava Roadmap assesses that the EU has many common challenges ahead, and highlights the need for EU leadership in a time when people are concerned by a perceived lack of control, and fears related to migration, terrorism, and economic and social insecurity.

It highlights four key areas for action, and makes a number of commitments under each heading: