Valéry Giscard d’Estaing, President of France from 1974 to 1981, died on 2 December 2020, aged 94. This appreciation of Giscard d’Estaing was written after the conclusion of his two years as Chairman of the European Convention in 2003. The author, Tony Brown, worked as an Advisor to the Oireachtas Members of the Irish Delegation to the Convention The Convention’s success in producing, with near unanimity, a comprehensive constitutional text owed much to Giscard’s presidency marked, in the words of the Financial Times, by “a mix of charm, guile and a certain authoritarianism that one would have expected from a former inhabitant of the Elysée.” Although initially adopted by EU governments, it was not until 2009 that the Lisbon Treaty, containing its main elements for the reformed governance of the EU, was signed and approved, in Ireland’s case after two referenda. 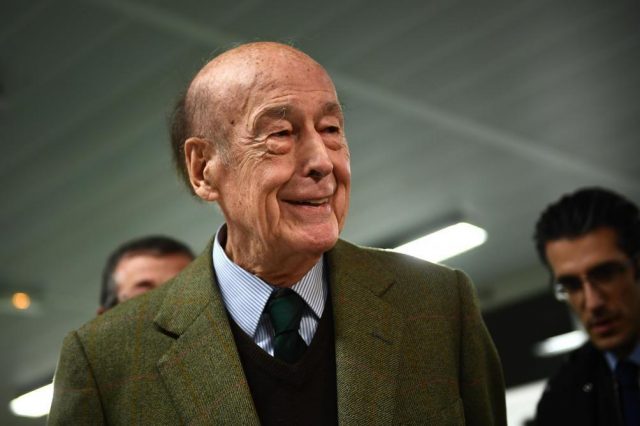 When I first set eyes on him, I was at once reminded of a personal hero. Just like J K Galbraith when we welcomed him to the IIEA a few years ago, here was an elderly man who had retained his straight-backed bearing and his commanding manner. Here was someone who was totally at ease with himself and with his surroundings. He made his early entry into the Convention meeting room from the door near the bar and moved slowly through the aisles, stopping again and again to greet old colleagues and to meet new ones. The women present were saluted in characteristic Gallic style.

The Convention’s uniqueness and its ultimate success was due, to a very great extent, to its Chairman – to his character, his intellect, his skills, his remarkable stamina and, even, to his prejudices and mistakes. This was no nominal chairmanship but an intensely personal commitment to a task he clarified at the outset as an intellectual reassessment of the future of the European Union: “We must have a passionate interest in the success of our task of we are to engage and persuade others. It is a task modest in form but immense in content, for if it succeeds in accordance with our mandate, it will light up the future of Europe.”

The Convention’s Chairman brought to it a personal history of forty years of European involvement with an amount of preconception and positioning. He also brought the particular strength of the political figure who is untouchable because he is no longer subject to parliamentary or popular votes. In effect, Valéry Giscard d’Estaing was answerable only to history and to his own place in history. There was an early piece of Convention gossip which claimed to describe a meeting between the President and his pragmatic, British Secretary General, Sir John Kerr. The experienced ‘mandarin’ was reported to have insisted that posterity would only accord a favourable rating to an outcome which, based on a true consensus within the Convention, could gain the acceptance of an Intergovernmental Conference.

As one commentator put it, it was necessary to avoid a strategy that would be too radical for the European Council, a body with which Giscard had some acquaintance. The word ‘consensus’ – and its disputed definition – was to become the key concept at every stage of the Convention’s work. Presenting the draft to the European Council at Thessaloniki, Giscard d’Estaing remarked that “since our proceedings opened […] we have been aware of the fact that our recommendations would only carry weight and authority if we managed to achieve broad consensus on a jointly presented draft.”

The Giscard chairmanship of the Convention had a number of observable characteristics.

It operated at three levels. In the face of the Convention as a body it was open and inclusive, moving from a rather unobtrusive role in the listening phase to a more proactive role as the work progressed to deliberation and drafting. Within the Praesidium he was very much the driving force, to the point of provoking serious divisions and, in relation to the institutional aspects of the treaty, actual confrontation with colleagues.

And, in a very public dimension, he was a determined communicator to the political leadership of Europe, clocking up a remarkable schedule of more than 150 meetings with Presidents, Prime Ministers and national parliamentarians. The communicating, travelling Giscard was also the premeditated briefer of the print and broadcast media. In the early months, each visit to a European capital was marked by an interview or an article designed to give visibility to the Convention. A well-judged capacity to command the headlines led to controversy in one country after another.

His style within the plenaries was distinctive. Often described as haughty, Olympian and condescending, his performance was more often open and inclusive. In the first phase a particular emphasis was placed on building a sense of unity and genuine dialogue. Giscard invited speakers making their first interventions to stand up and make themselves known to colleagues. Members from candidate countries received a special welcome and, for a while, permissive tolerance was shown to those who insisted on turning up in full traditional regalia on their national days.

Giscard presided over plenary sessions in which many members – and alternates – wished to be heard in debates with obvious time limits. He enforced a three-minute rule with reasonable fairness and introduced a successful ‘blue card’ procedure permitting one-minute responses to points raised and, thus, permitting a healthy element of debate. In the major debate on institutions in May 2003, there were almost forty such interventions which added greatly to the sense of a real political occasion.

Giscard succeeded in dealing with the role of alternates, observers and, above all, of the representatives of candidate countries with a degree of flexibility which added greatly to the overall success of the Convention. By the end, an effective, informal procedure ensured that alternates got their chances to speak, thus widening the spectrum of political opinion and, in particular, giving a voice to opposition parties from national parliaments. The observers were likewise given an appropriate number of speaking opportunities which meant, for example, that the views of the social partners and of regional authorities were heard.

Others have described various instances of Giscard’s presidential methods, including some which saw the more authoritarian aspects of his character fully revealed. No one could doubt his conviction that the bigger Member States had been badly treated at Nice – after all, he had led an unsuccessful attempt to reject the treaty in France on exactly these grounds. He wanted to redress this setback and set out to do so by his remarkable efforts to redefine the concept of ‘consensus’. In his version, consensus was entirely related to the idea that a majority of the population of the Union was the most important factor. The equality argument of the smaller states was brushed aside for months and publicly derided at the European Council in Athens.

But, above all, Valéry Giscard d’Estaing proved to have an overriding commitment to the view that the outcome of the Convention must be capable of being taken seriously by the IGC and the European Council. That was dependent on the outcome being a single document with as near to unanimous support as possible. It implied meeting the needs of the bigger states but finding ways to accommodate the others, for example by delimiting the role of the President of the European Council and backing the Benelux compromise on the composition of the Commission.

By a combination of brinkmanship and targeted persuasion, he achieved his aim and produced a draft Constitutional Treaty supported by a quite remarkable consensus, however defined. His great positive characteristics of high intelligence, incisiveness and shrewdness came to the fore. His experience was decisive in the critical moments and his commitment carried great conviction even with his strongest critics. In the final plenary, one of the harshest critics, the Austrian Green MEP Johannes Voggenhuber, vigorously defended the final consensus and paid a tribute to the role of the President which was received with obvious pleasure.

In his presentation to the Thessaloniki meeting, Giscard d’Estaing argued that the text was “the fruit of our collective work over a period of sixteen months. It is a single text, constituting a coherent and unequivocal whole. There are many who considered this result impossible to attain. If we have succeeded in doing so, it is because each of us has agreed to acknowledge that our own preferred solution was not necessarily acceptable to others.”

No one can doubt that Giscard d’Estaing fought long and hard for his preferred solutions in many areas. He clearly held very strong views on the finality of the European integration process. He also, however, was able to adapt to the realities of the situation in a genuinely flexible manner. This was revealed in his final speech to the Convention participants in which he addressed three relevant points concerning the future direction of the debate on Europe’s future:

… the new Member States were being given an opportunity to adapt to the working of the institutions by putting off the reform of the Commission until 2009 together with the new system of QMV; these particular provisions helped to persuade the representatives of the candidate countries to move towards the final consensus;

debate was not ended on a precise evaluation of the positioning of the European Union over time; it should be recognised that the consensus arrived at, far from being the lowest common denominator, was in fact the furthest point which it was possible to reach without risking the rupture of the fragile fabric of the Union;

finally, the way was left open for future developments in European integration by provisions such as enhanced co-operation; those who wish to move on to new stages of co-operation will not find themselves confronting a dead-end but will find an open door which will facilitate their onward journey.

Looking at the many aspects of the Convention and recalling the scepticism which was evident when it was originally convened – with government spokespersons in particular dismissing it as a talking shop which would pass the time before the real work began in the IGC – it is still difficult to believe that so much was achieved.

This was an historic breakthrough, and it must be fully acknowledged that it would not have happened without Valéry Giscard d’Estaing. All of the periodic frustration, and even infuriation, with aspects of his style as Chairman must be put aside to make way for genuine appreciation of his high intelligence, determination, skill and, in the last analysis, flexibility. It was a rare privilege to watch a great political figure in action over a protracted period and to such a degree transparently. This was history in the making.

In his final address to the Convention, on 10 July 2003, Valéry Giscard d’Estaing managed to catch the spirit of the entire undertaking.

We have succeeded because we have learned from each other. Learned from working with each other, in our working groups, our circles de discussion, our Praesidium. Coming from different backgrounds, countries, institutions, we have come to understand each other, to narrow areas of disagreement and to identify solutions acceptable to all.

We have learned from each other, because each of us has had something to contribute […] I have also learned from all of you, at an age which is not normal for learning, from the different preconceptions and expertise you all brought to our debates, from the enthusiasm and persistence of your advocacy, from the wisdom and restraint of your consensus-building.