On their arrival on Ventotene, the German and French leaders joined the Italian Prime Minister in a wreath-laying ceremony at Spinelli’s grave, honouring the memory of a man who is widely recognised as one of the ‘fathers’ of European integration.

On 21 August 2016, the leaders of Italy, Germany and France met on the Italian island of Ventotene to discuss issues arising from the outcome of the UK referendum. The meeting gives rise to interesting historical considerations, in particular about the extraordinary life and ideas of Altiero Spinelli. 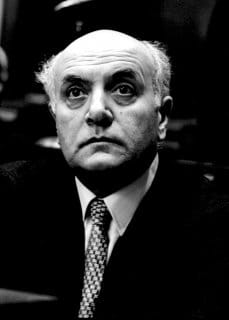 On their arrival on Ventotene, the German and French leaders joined the Italian Prime Minister in a wreath-laying ceremony at Spinelli’s grave, honouring the memory of a man who is widely recognised as one of the ‘fathers’ of European integration. Spinelli’s story is remarkable, as is his legacy.

Born in Rome in 1907, Altiero Spinelli became active in the Communist movement as a young man, in opposition to the Fascist forces which dominated Italian politics at a time when Benito Mussolini was consolidating his position as dictator or ‘il Duce’. Arrested in 1927, Spinelli spent the next sixteen years as a prisoner on the island of Ventotene. There he devoted his time to study and political discussion with fellow inmates, notably Ernesto Rossi with whom he wrote the Ventotene Manifesto in 1941, a powerful polemic on the theme of ‘a free and united Europe.’ Addressing the disastrous state of Europe under Nazi domination, the Manifesto argued that the only hope for a peaceful and progressive future lay in a federal Europe. Once smuggled out of Ventotene, the Manifesto became influential among the European resistance movements and ensured a prominent role for Spinelli in the evolution of Italian politics after the war.

Spinelli founded the European Federalist Movement which advanced the concept of a federal Europe with a particular emphasis on the need to build effective and democratically organised institutions at a European level. Following the 1950 Schuman Declaration and the creation of the European Coal and Steel Community, attention turned to developing the political dimension of the project. In 1954, Spinelli was an active member of the Constitutional Committee of the ECSC Assembly, the Brentano Committee, which drew up a blueprint for a European political community. This fed directly into the process which produced the Treaty of Rome in 1957.

In 1965, Spinelli founded the Institute for International Affairs (IAI) in Rome and became its first director. The Institute’s main objective was to promote an understanding of the problems of international politics through studies, research, meetings and publications. The IAI was seen as an important model when plans for the creation of the Institute of European Affairs were discussed in 1989.

In 1970, Altiero Spinelli was appointed to the European Commission, with responsibility for  Industry, Research and Technology. In 1973, he played a key role in drawing up the first European Environment Policy. He published a major study of the institutional implications of the first EEC enlargement and, in this connection, visited Ireland to address a Labour Party conference prior to the 1972 referendum. He left the Commission in 1976, returning to national politics.

An advocate of direct election to the European Parliament, Spinelli was elected in the first poll in 1979. Immediately he established the Crocodile Club (named after a Strasbourg restaurant) which brought together a large number of MEPs supportive of closer integration. They lobbied intensively and succeeded in obtaining a decision of the Parliament to set up a Committee on Institutional Affairs, with Spinelli as the main rapporteur, which produced a report within five months. On 6 July 1982, the European Parliament adopted a resolution calling for a modification of the Treaties to transform the European Communities into the  European Union prefigured in the founding texts.

Spinelli then turned his attention, and that of the Committee on Institutional Affairs, to the drafting of a treaty text providing for the establishment of the European Union. In February 1984 the Draft Treaty Establishing the European Union was presented to the European Parliament. Introducing the draft, Spinelli refuted the claim of a lack of European political will for unification, stating that such will does in fact exist and finds its expression in the European Parliament. He called on the Parliament to demonstrate leadership and the response of MEPs was to adopt the Draft Treaty by 237 votes to 321, with 43 abstentions. Six Irish MEPs – four from Fine Gael, Brendan Halligan of the Labour Party and the Independent T.J Maher – voted for the Treaty while three Labour Party MEPs voted against and the others – including five Fianna Fail representatives – abstained.

An intensive debate followed on the implications of the Parliament’s decision, reflecting Spinelli’s comment that the real battle for the Union had started. Spinelli visited Dublin again to speak to a Dáil Committee on the issue. He then called on France which held the Council Presidency “to do more than come and speak to us in ritual fashion […] of the Council’s trifling achievements.” On 24 May 1984, President Francois Mitterrand declared France’s willingness to take the initiative to the next stage. Spinelli welcomed this step, seeing it as the beginning of a new chapter for Europe, the moment when the draft treaty became the subject of European construction.

The Fontainebleau Summit of June 1984 took the decision to set up an ad hoc committee of personal representatives of the Heads of State or Government to make suggestions for the improvement of the operation of European co-operation. The committee chairman was Senator James Dooge, nominated by the then Taoiseach, Garret FitzGerald. The aims of the committee included proposing objectives, policies and institutional reforms necessary “to restore to Europe the vigour and ambition of its inception.” The committee reported to the European Council in March 1985 and proposed that an intergovernmental conference should be convened to negotiate a draft European Union Treaty based on the acquis communautaire “guided by the spirit and method of the draft Treaty voted by the European Parliament.”

The Intergovernmental Conference was duly convened and eventually produced the text which became the Single European Act. In a tribute to Spinelli, Brendan Halligan commented that the Dooge report is “probably Ireland’s greatest ever contribution to the process of European integration”, as its adoption by the European Council led to the first Intergovernmental Conference since Messina as well as to the adoption of a series of Treaty amendments in the Single European Act. Jacques Delors stressed the historic perspective by commenting that “[…] without the draft Treaty on European Union there would have been no Single European Act.”

Speaking in the Seanad on the Single European Act, James Dooge commented on political reality:

[…] while one might commend the ad hoc committee for the greater level of idealism we must congratulate the Intergovernmental Conference on a greater degree of wisdom because the most important thing about what is now being proposed is that it is acceptable to all of the Twelve.

Altiero Spinelli died in 1986.   In the European Parliament, Jacques Delors made a moving tribute:

[Spinelli] would not be like so many other men who make a fleeting impression in their own time, but that others born in a quite different Europe will carry on his campaign and that all of us […] shall bear in mind the thought that motivated him; that whenever Europe is divided within its own ranks, when it is plunged in civil war, then Europe ceases to exist. At such time Europe has no world vocation, no humanism and no prosperity.  Let us be faithful to the message.

In his personal tribute, Brendan Halligan has written that “[i]n his memoirs Monnet reminds us that, while institutions endure, nothing can succeed without the individual, that special type of individual who puts their stamp on history and leaves the world a different place; in Spinelli’s case a better world.”