This blog examines the Franco-German non-paper on the ‘Future of Europe’ Conference and the key questions and guidelines for the conference. The non-paper reignites the debate regarding where Europe is heading and what kind of reform is needed for the future of the European project and assesses Franco-German relations. 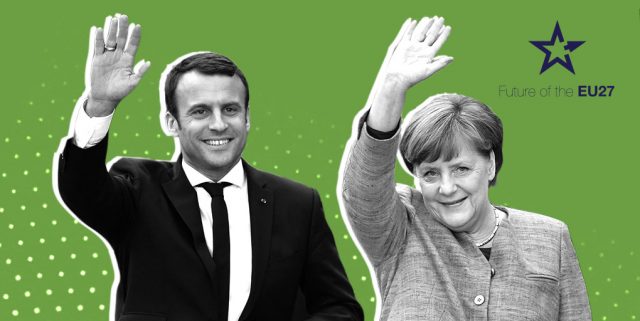 Despite differences over the future of the Economic Monetary Union (EMU), and strategic defence and foreign policy issues, Germany and France have once again taken the first step on the road to finding the way forward for what will be a new union of 27 EU Member States. A Franco-German non-paper released on 27 November 2019, proposing guidelines to a Conference on the Future of Europe from 2020 to 2022, reignited the debate regarding where Europe is heading and what kind of reform is needed. The two-page non-paper proposes the guiding foundations for the conference.

The first phase would focus on EU democratic functioning especially ‘regarding elections and designations in key positions.’ It also foresees possible changes to EU Treaties and institutional and democratic reforms. As the paper outlines; ‘Institutional issues could also be tackled as a cross-cutting issue to promote democracy and European values and to ensure a more efficient functioning of the Union and its institutions.’

Pragmatism versus Idealism: Franco-German Relations and the Future of Europe

France and Germany, although powerful forces in the EU, have not always moved in the same direction with the European project. There have been plenty of disagreements over a forward-looking EU. This makes the non-paper on the Future of Europe Conference significant, especially when there have been disparities over integration and enlargement and substantive quarrels over who should lead the new European Commission.  Ursula von der Leyen’s proposed candidacy at the time sought to end the contestations between France and Germany, but did little to heal Macron’s rift with the European Parliament. (The European Parliament had proposed their own candidates under the Spitzenkandidat system, or lead candidate process, which failed to meet the approval of European Heads of State.)

German Chancellor Angela Merkel, a staunch defender of the European project and a towering figure in EU politics for over a decade, has often questioned Macron’s vision for Europe.  Merkel has also been critical of the EU approach to migration reform and the EU’s nations’ failure to speak with one voice in international affairs. The fact that the EU has ‘no collective approach to the question of managing migration’, has led the German leader to call for ‘an EU-wide asylum authority and collective standards for granting or refusing applications for protection’ and a ‘real European border police that can act if necessary, even if it displeases one of the (EU) states with external borders.’[1] Even though the German Chancellor has demonstrated a strong position on migration reforms, she has displayed caution with regard to the future of the EU.

Macron has chosen the opposite approach. The French President is a leader with ideas, ideals and aspirations for Europe. He has a pragmatic vision for Europe based on the notion of ‘audacity’ and ‘more audacity.’ As Macron stated ‘Europe is Utopia…[but] utopists are pragmatists, and realists,’ he advocates a strategic purpose for Europe. In January 2019, Macron published an open letter to the French people, emphasising that in a time ‘of questioning and uncertainty like the one we are going through, we must remember who we are.’ Macron’s perspective on the future of Europe is in line with his thinking on participatory democracy, citizens at the heart of the future of the EU.

In April 2019, before the European Parliament elections, the French President’s ‘open letter’ made an unprecedented appeal for unity ahead of the elections, calling for changes to EU treaties and for citizen conventions to take place. Thus, the concept for a conference on the EU’s future was initially proposed by Macron and was subsequently endorsed by the new European Commission President Ursula von der Leyen, who has proposed a 2020-2022 conference.

Macron’s progressive vision on the future of Europe is also seen in his recent interview with the Economist magazine (7 November 2019). Yet, the latest turmoil in international affairs has called into question the future of the European project. Macron, in his own words, declared that; ‘to be wearing ourselves out over Brexit, to have Europe finding it so difficult to move forward, to have an American ally turning its back on us so quickly on strategic issues: nobody would have believed this possible.’[2] For Macron, Europe needs to choose to move forward.

A United and Sovereign Future?

Notwithstanding the differences between Germany and France, the two countries have more often aligned their strategic views to safeguard Europe’s interests.  Just a little over a year ago, in November 2018, France and Germany held a bi-lateral meeting which discussed the European project, with Merkel claiming that Europe is at a ‘crossroads’, in terms of what role it should play in the world.[3]

Macron, for his part, spoke of ‘Franco-German responsibility in preparing for the future and the re-founding of Europe, …this responsibility means building a truly sovereign Europe.’[4] In January 2019, Merkel and Macron signed a treaty on Franco-German Cooperation and Integration in Aachen. The treaty reaffirms the centrality of the Franco-German relationship and the need to halt ‘splintering Europe beset by resurgent nationalism, right-wing populism and Brexit’ and states that ‘reconciling these two great continental powers was a signal achievement of the second half of the 20th century’.[5]

This same trend towards sovereignty and unity emerges for the recent draft non-paper.  Given that the EU is facing a myriad of challenges, the paper states that ‘the Conference should address all issues at stake to guide the future of Europe with a view to making the EU more united and sovereign – such as Europe’s role in the world and its security/defence, neighbourhood, digitalisation, climate change, migration, fight against inequalities, our “social market economy” model (including social rights, industrial and innovation policy, trade, EMU, competitiveness), the rule of law and European values.’

The document urges close cooperation with citizen consultation in a ‘bottom-up process,’ ‘with EU-wide participation of our citizens on all issues discussed.’ In September 2019, the new European Commission President, von der Leyen, outlined her vision and political guidelines for the next Commission; ‘A Union that strives for More.’ Von der Leyen advocated for Europeans to have a say in building the future of the union; ‘I want citizens to have their say at a Conference on the Future of Europe, to start in 2020 and run for two years. The Conference should bring together citizens, including a significant role for young people, civil society and European institutions as equal partners. The Conference should be well prepared with a clear scope and clear objectives, agreed between the Parliament, the Council and the Commission.’[6]

The Franco-German non-paper also reflects this position, with panels of randomly selected EU citizens and thematic conferences to be held in many different EU Member States, with a commitment to the inter-institutional mandate where clear outcomes are expected. In addition, the Conference according to some commentators, should ‘make all types of proposals they deem necessary to strengthen Europe, including treaty changes or a new treaty framework altogether where it is needed to give Europe the necessary competences, financing and effective governance tools.’[7] As such, the conference aims at tangible results and reform proposals for the future of the European project.

The proposed timeline is set out below for the Future of Europe Conference in the Franco-German Non-Paper: 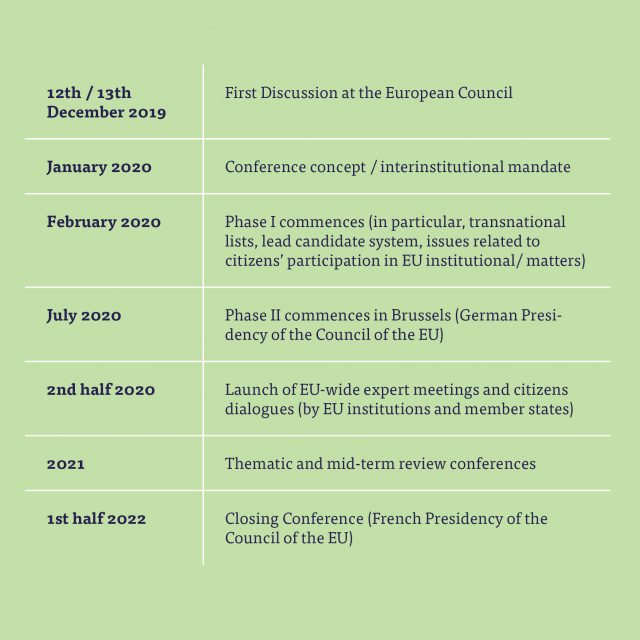 Nonetheless, there are some disagreements over which policy themes should follow conference discussions in terms of Phase I and Phase II.  EU Ambassadors have expressed ‘caution’ on the Franco-German non-paper, claiming that ‘it’s a delicate process involving civil society and many other actors, and it has to be done properly.’ They questioned the timing and scope of the conference, which could be altered. (Moreover, former Belgium Prime Minister Guy Verhofstadt has been mentioned as a likely chair of the conference).[8]

The non-paper proposed by the German Chancellor Angela Merkel and French President Emmanuel Macron is an important step in mapping out a distinct future for Europe and one shaped by Europeans. Similar sentiment has been expressed previously with regard to Europe’s future. The European Commission’s White Paper (2017) acknowledged ‘a process in which Europe determines its own path’, and that ‘we should remember that Europe has always been at its best when we are united, bold and confident that we can shape our future together.’

The Franco-German non-paper is attempting to see the bigger picture when it comes to Europe.  For Macron in particular, ‘Europe is a miracle. Europe was built on this notion that we would pool the things we had been fighting over: coal and steel. It then structured itself as a community, which is not merely a market, it’s a political project. But a series of phenomena have left us on the edge of a precipice.’[9] How will Europe deal with these pressing challenges’? In a new global order of disorder, Europe must confront, adapt, transform and rise to the unpredictable nature of current and future events. The future is not some distant or hard to reach place after a long journey. Shaping the future means taking the necessary concrete steps that are needed for action. For Europe, the future is now.

[5] Simon Tisdall. ‘Macron and Merkel are trying to safeguard Europe, not dominate it. https://www.theguardian.com/commentisfree/2019/jan/22/merkel-macron-europe-treaty-france-germany

[6]  Ursula von der Leyen. 2019. A Union that strives for more. My agenda for Europe. Political guidelines for the next European Commission 2019-2024. https://ec.europa.eu/commission/sites/beta-political/files/political-guidelines-next-commission_en.pdf

[7]  ‘Federalists welcome the Franco-German proposal for the Conference on the Future of Europe’. 27 November 2019.  https://www.federalists.eu/news/uefnews/federalists-welcome-the-franco-german-proposal-for-the-conference-on-the-future/