On Wednesday, 17 January 2018, Taoiseach Leo Varadkar presented his vision for the future of Europe to the European Parliament in Strasbourg. This blog takes a look at some key issues that the Taoiseach discussed. 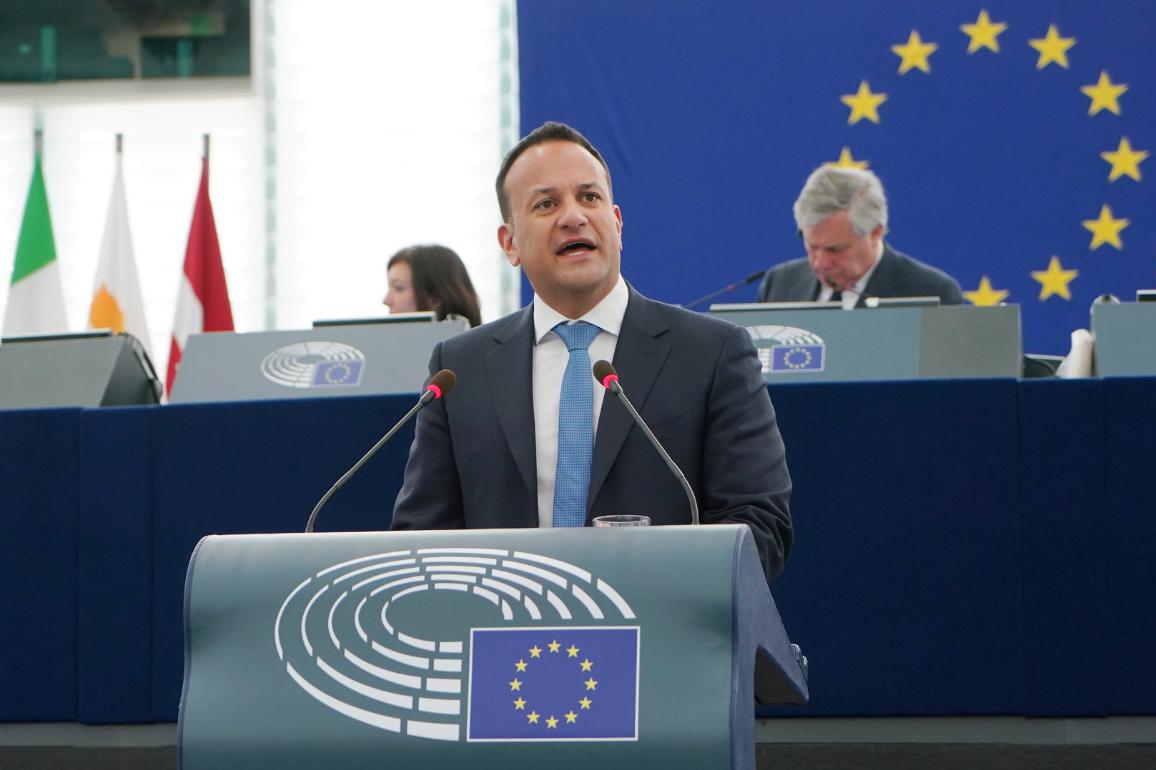 On Wednesday 17 January 2018, Taoiseach Leo Varadkar became the first EU Head of State or Government to address the European Parliament as part of the ongoing debate on the Future of Europe. Alternating between four different European languages, the Taoiseach spoke of his vision for a European Union with more Member States, a larger budget, and harmonisation in policy areas that have a proven European added value – which for him would not include harmonisation of national tax policy.

Mr Varadkar’s address received high praise from prominent MEPs, such as Manfred Weber and Guy Verhofstadt, as well as European Commission President Jean-Claude Juncker, who said that he “couldn’t agree more” with the Taoiseach’s vision for Europe. On the other hand, a number of MEPs challenged the Taoiseach on Ireland’s corporate tax policies and its failure to meet climate change targets. Although he staunchly defended Ireland’s corporate tax policy, Mr Varadkar did concede that Ireland has been a “laggard” in the area of climate policy, and has significant work to do in meeting its emissions targets.

A number of the key issues from the Taoiseach’s address are dealt with below.

Responsibility was a key theme of the Taoiseach’s speech. Recognising the prosperity and influence that European Union membership has brought to Ireland, Mr Varadkar outlined his view that Ireland now has a responsibility to play a leading role in a debate on the future of Europe and in extending the possibility of EU membership to countries in the Western Balkans. The Taoiseach expressed his support for a path to membership for all countries who “aspire to – and who are ready to take on – the responsibilities and obligations of membership.”

With increasing connectivity to the Western Balkans being a central priority of the Bulgarian Presidency of the EU, and preparation underway for an EU-Western Balkans summit in Sofia in May, Mr Varadkar’s support for a path to EU membership for these countries puts Ireland in a prominent position in the debate on the future of Europe.

The Taoiseach believes that the responsibility that comes with the benefits of EU membership is not only in relation to other European countries, but also to nations in Africa. He argued that promoting prosperity and security in Africa is in Europe’s interest as well as theirs, and that if a crisis such as those that occurred in Libya or Syria were to happen in a much larger country in Africa, the consequences for Europe, and Africa, would be severe.

Development policy, among other areas of foreign policy, epitomises the added value for Member States that cooperation through the EU framework can create. Were it not for Ireland’s EU Membership, Mr Varadkar believes, would have a much-reduced capacity to project its soft power and leadership across the globe.

Despite affirming his view that corporations should pay their fair share of tax, and pledging that Ireland will continue to close loopholes in its tax laws, a number of MEPs challenged Mr Varadkar on Irish policy in this area. Danish MEP Jeppe Kofod and Belgian MEP Philippe Lamberts insisted that Ireland is propelling a race to the bottom with its low corporate tax rates and has acted as a tax haven for large multinational corporations, with particular reference to the Apple Tax case.

The Taoiseach rebutted this criticism, firstly by pointing out that the Apple case is in fact in the realm of state aid, and not tax policy. Regarding criticism of Ireland’s corporate tax rate, he argued that national taxes should fund national budgets, and that harmonisation of tax rates is not a necessary step towards building a closer union. He cited, as an example, the United States, a federation in which there is considerable tax competition between States. Finally, he repeated a familiar position of the Irish Government that if any tax harmonisation is to occur, it should be done at a global level, through the OECD, so that EU countries are not placed at a comparative disadvantage compared with the US, Japan and soon the UK.

If there is a race to the bottom, the Taoiseach contended, then it will be a race that Ireland would lose. He pointed out that other EU countries, such as Bulgaria and Estonia, already have corporate tax rates that are lower than Ireland’s, and Ireland has not lowered its own rate in decades. Furthermore, other EU countries may have nominal corporate tax rates that are higher than Ireland’s, but when various loopholes and tax credits are taken into account, their effective tax rates can undercut the Irish rate of 12.5%.

With regard to the EU budget, Mr Varadkar pointed out that, since the country’s accession in 1973, Ireland has transitioned from being a net beneficiary of the EU budget to being a net contributor to it. Nonetheless, he stated that Ireland is open to contributing more, as long as the expanded budget is spent on things that “contribute to the advancement of the European ideal”. This would involve additional structural and cohesion funding for poorer Member States and maintaining funding for successful EU initiatives such as the Common Agricultural Policy, Erasmus, and the European Investment Bank.

This aspiration is directly linked to the upcoming negotiations on the Multiannual Financial Framework (MFF) – which sets the parameters of the annual EU budgets from 2021 to 2027. Negotiators of the MMF will already be faced with the challenge of filling the budgetary gap left by the withdrawal of the UK. The idea of increasing expenditure will likely be met with opposition from other net contributor Member States, with some, less agrarian Member States, even suggesting cuts to the CAP. It will be a political challenge for the Irish government to secure additional structural funds to Central and Eastern European States without sacrificing spending to policies of Irish interest.

The Taoiseach’s speech at the European Parliament expressed his belief that the EU is a vital mechanism for Ireland in projecting its influence across the globe and tackling challenges that can only be overcome through collective action. He reminded Members of the European Parliament that this is not only true for Ireland; in the global context, even the larger EU Members are shrinking relative to the rest of the world and will soon be considered “small states.” The Taoiseach declared that EU countries are “going to need to stick together if we are to protect what we have and export our values and world view,” but all the time was careful to balance this increased cooperation against the principles of national sovereignty and subsidiarity.