This blog evaluates the prospects for peace in Syria in the context of the Syrian Constitutional Committee and the pursuit of constructive diplomacy to overcome the major challenges facing the political process. 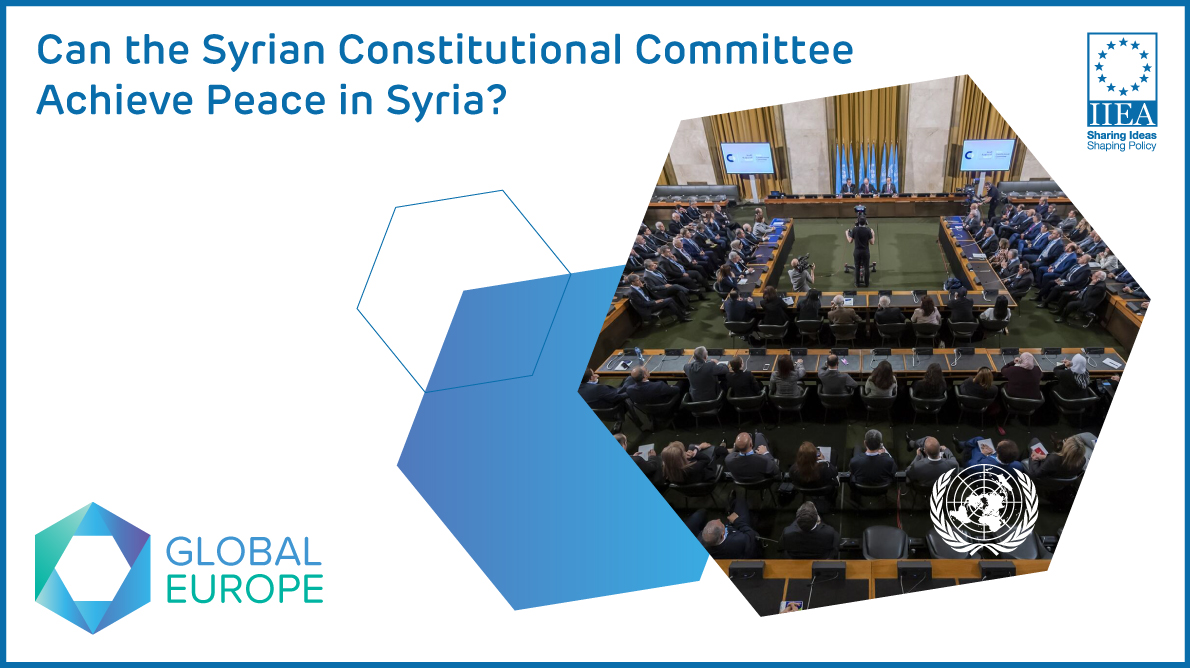 Established in Geneva in October 2019, the Syrian Constitutional Committee (SCC) is the Syrian-led, Syrian-owned body which has been mandated to find a political solution to the Syrian conflict, under the auspices of UN Special Envoy for Syria, Geir Pedersen. It is underpinned by UN Security Council resolution 2254, which sets out a roadmap for political transition under UN guidance, including the holding of free and fair elections and the drafting of a new constitution.

However, the short lifespan of the SCC to date has been fraught with difficulties and a lack of tangible progress towards achieving the ambitions laid out in Security Council resolution 2254. After the fifth and most recent session of the SCC, which took place in Geneva from the 25-29 January 2021, Special Envoy Pedersen highlighted the lack of progress which had been made and cast doubt over the ability of the SCC to achieve a peaceful political solution to the Syrian conflict.

Despite the Assad government’s attempts to delay the peace process, Russia and Iran – which have provided considerable military and financial support to the Syrian government – are arguably keen to achieve a political settlement and may have an important role to play in shaping the final outcome of the peace process. Moreover, in the absence of viable alternatives, the SCC remains the most likely avenue to reach a political settlement, either by adopting a strategy of constructive diplomacy or by managing it as if it were a frozen conflict.

In total, the Syrian Constitutional Committee is made up of 150 Syrian delegates from three representative groups: the Government of Syria (GoS), the Syrian opposition or Syrian Negotiations Committee (SNC) and the members of civil society (the middle third).  A small body with 45 members – made up of 15 members from each group – has responsibility for drafting the new constitution, while the larger body is made up of all 150 delegates and is responsible for approving the draft constitution. Additionally, UN Special Envoy for Syria, Geir Pedersen, is mandated by UN Security Council resolution 2254 to facilitate the negotiations between the representative groups with a view to reaching a political settlement to the Syrian conflict.

The fact that the negotiations to date have not led to concrete progress has further undermined an already fragile calm in Syria. The collapse of the first round of talks in October 2019 due to irreconcilable differences between the Government and Opposition was quickly followed by a major military offensive by the Syrian Government against opposition-held areas in Syria’s North West. This deficit in trust has set the tone for what has materialised into an increasingly polarised political process.

Moreover, the COVID-19 pandemic has only served to further sow divisions, as evidenced by the fact that meetings could not be held virtually due to lack of agreement between the opposing parties as to how such virtual meetings would be conducted.

While the fourth round of negotiations, which took place in December 2020, led to some positive achievements, including the recognition of the impact of the conflict on the lives of Syrian women and the importance of their role in Syrian political life, progress on the core mandate of Security Council resolution 2254 has remained in a state of paralysis.

In his remarks ahead of the fifth session of the SCC, which took place from the 25-29 January 2021 at the Palais des Nations in Geneva, Special Envoy Pedersen called on the Co-Chairs of the two main groups (Ahmad Kuzbari, who represents the Government of Syria and Hadi al-Bahra, who represents the Opposition) to establish  “more effective and operational working methods” and more “co-operative diplomacy” so that the meetings can be better organised and more focused, and emphasised the need to ensure that the Committee begins to move from preparing a constitutional reform towards actually drafting one.

At the conclusion of the fifth session of the SCC, Special Envoy Pedersen expressed disappointment at the slow progress of the peace talks. He highlighted the continued disagreements between the two Co-Chairs of the Committee, which continued to frustrate efforts at advancing the agenda, and the lack of progress made on establishing constitutional principles.

A key sticking point, in his view, is the lack of a mechanism whereby areas of consensus which have been established at the Committee meetings can be effectively translated into textual submissions for the drafting process. The Special Envoy indicated that if such a mechanism were in place, it would be possible to move forward with the drafting of the constitution.

At present, the future of the SCC as the primary vehicle for reaching a political settlement very much hangs in the balance. Special Envoy Pedersen’s comments that the Syrian people are experiencing “a deep sense of hopelessness about the future” further serves to emphasise the urgency of reaching a peaceful political solution.

However, the impasse in the negotiations is unlikely to be overcome in the short term as neither side appears willing to compromise significantly on its position. Moreover, Special Envoy Pedersen has hinted at the need to adopt a new approach, which he calls the imperative of constructive diplomacy, if the talks continue to stall.

In his view, no one actor or group of actors – Syrian or foreign – can determine the political settlement to the conflict, it must be negotiated by all parties. To achieve this, the Special Envoy has recommended the adoption of mutual steps to create the trust necessary to generate movement on Security Council resolution 2254. This could include creating a dynamic of reciprocal measures, such as allowing refugees to return safely and the release of detainees, which would contribute to the establishment of a safe, calm and neutral environment allowing any constitutional reform to be matched by positive conditions on the ground. In addition to the implementation of UN Security Council resolution 2254, another aspect of constructive diplomacy would be concerted, sustained and robust diplomatic dialogue among key players, particularly between the United States and Russia, and continued engagement between Iran, Russia and Turkey via the Astana process.

The fate of the fledgling SCC may well be determined by the success or failure of such creative diplomatic approaches. In the continued absence of progress, however, it is an open question as to whether the SCC will continue to carry the political capital necessary to generate the impetus towards achieving peace in Syria.