In a welcome sign that concern about climate change is being mainstreamed across the body politic, Prof. Philip Lane, Governor of the Irish Central Bank, made a significant contribution to the debate on 5 February 2019.

In a welcome sign that concern about climate change is being mainstreamed across the body politic, Prof. Philip Lane, Governor of the Irish Central Bank, made a significant contribution to the debate on 5 February 2019.

In a speech delivered at NUI Galway, Prof. Lane described the challenges posed by climate change for the Irish economy and the financial system, and outlined how the Central Bank intended to respond. He first explored how climate risks—encompassing impacts from severe weather, but also from the transition to a low-carbon economy—could pose dangers to the Irish economy. As he noted, there is a need for a massive increase in investment in low-carbon technologies, which has implications for households, firms and Government policy, across all economic sectors, from agriculture to construction.

Moving on to the financial system, Prof. Lane addressed the “risks to financial stability posed by climate change”, and the challenges faced by financial regulators and central bankers in managing this risk. Focusing on the pace of low-carbon transition, he outlined two scenarios in which the risks to financial stability might become pronounced and unpredictable. The first is a scenario where action is delayed, meaning that a “sharp policy shift will be ultimately required”. The second is the opposite scenario, where an “over-ambitious schedule for carbon taxes” destabilises the economy. In both cases, the macroeconomic disruption could have spillover effects for the stability of the financial system.

While Prof. Lane did not state which of these two scenarios is more likely, the answer to that question is quite clear. In the three decades that have elapsed since the IPCC, the UN’s climate science body, first reported on the risks posed by climate change, the World Bank estimates that only 13 percent of global emissions are covered by a carbon tax, and, in the vast majority of cases, the price is set well below $10 per ton. Ireland is no exception. Climate action has been ineffectual in reducing emissions, and increasingly demanding climate targets loom on the horizon. Previous IIEA analysis has quantified the exposure of the public finances to continued procrastination.

Prof. Lane concluded that climate change constitutes “a material financial stability risk”. To manage this risk, it is important that firms take efforts to measure their exposure, and to report on these risks to investors. In theory, this can help the market price climate risks into resource allocation decisions—but this is far easier said than done.

Take, for example, a pension fund deciding on its investment portfolio. Should it invest in oil exploration company A or wind turbine manufacturer B? In theory, investors compare opportunities, and choose to buy and sell assets, according to perceived risk-adjusted returns. In other words they consider the likely return on investment, and the probability that they will lose their capital. This calculus will clearly be impacted by proper consideration of climate risk: if Government decides to ban off-shore exploration for oil and gas, or to impose a high carbon price, or if there is a technological breakthrough in off-shore wind, or the oil company is subject to climate litigation, this could put company A out of business and prove a boon to company B.

As Prof. Lane argued, it is therefore important that companies consider these various risks in a  comprehensive manner, and report on their exposure because “sufficient information is required if climate risks are to be adequately assessed”. If a firm or group of firms (say, in the coal sector) does not report on climate risk, it can be transmitted unknowingly through to other actors in the financial system. This is when “systemic risk” and the stability of the financial system become an issue.

As Prof. Lane noted, the European Commission’s action plan for sustainable finance attempts to tackle these risks by: developing a framework for determining what can be considered an environmentally sustainable economic activity; requiring reporting from firms on how they manage climate risk; and benchmarking the performance of financial institutions to provide investors with better information on the carbon footprint of their investments.

He concluded that climate change is much higher on the agenda for central bankers and financial institutions than it was a few years ago, and committed the Irish Central Bank ro incorporating the carbon transition into its future macroeconomic and financial stability assessments.

It is great to see this thoughtful and comprehensive treatment of climate risk by the Governor of the Central Bank.  But as Prof. Lane noted, it remains to be seen if this approach works.

Our own research uncovers some of the challenges on managing financial risks that may be encountered. Much of the literature on climate risk that has been published to date has focused on assessing “stranding risk” for fossil fuel exploration companies, for the power generation sector, and for companies that own these assets. It is clear from these studies that difficult-to-reach and carbon-intensive reserves with high capital costs face higher stranding risk, particularly when a robust emissions constraint is assumed (e.g. meeting a 2 degree or 1.5 degree global target). This should be clear to institutional investors (although many continue to act as if these targets will not be reached).

However, less is known about the exposure of financial institutions to climate risks. In as-yet -unpublished research (undertaken with UCC colleagues, Brian Ó Gallachóir and Celine McInerney), we have explored understanding of stranding risk among Irish investors in the power and financial sectors. Findings from a survey undertaken in 2018 suggest that power sector actors were more confident in their ability to assess and manage stranding risk, and had taken more decisive steps to manage it. Financial market actors, by contrast, pointed to a lack of information or accepted methodologies for making these assessments. These issues and challenges seem to be hinted at by Prof. Lane.

Our findings perhaps reflect a greater diffusion of risk for financial institutions and portfolio managers, but also perhaps the greater liquidity of financial compared to physical assets. It may also be because risks that are typically considered by financial market actors (such as market, inflation, or interest rate) are measured on a short-term basis but climate risks demand longer time horizons. Power sector actors, by contrast, are used to evaluating investment decisions on a multi-decadal basis.

What our findings suggest is that as you move along the investment chain (Fig 1), less is known about climate risk, and it becomes increasingly challenging to manage it. 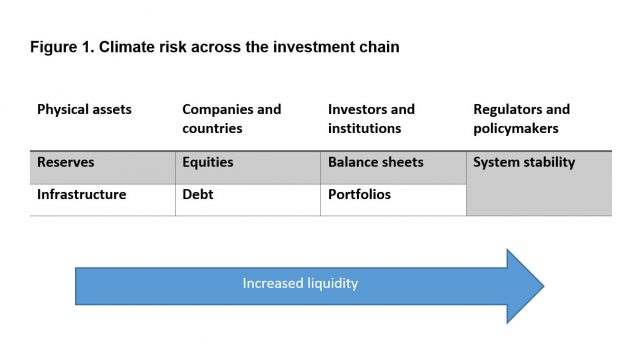 These findings are reinforced by other studies. For example, the Cambridge Institute for Sustainability Leadership (2016) stress-tested a number of representative investment portfolios, and concluded that climate risks could lead to financial tipping points that investors are not prepared for. It found that diversification strategies could offset approximately half of the negative impacts, but that climate risk is to a certain extent “unhedgeable” against. Several Carbon Tracker Initiative (CTI) studies have considered the systemic implications of companies listed on global stock exchanges that are highly dependent on fossil fuel reserves. The 2013 CTI study, for example, found that the MICEX Index (Moscow) and Athens Stock Exchange General Index were the most intense and that some of the smaller exchanges (Brazil, Hong Kong, Johannesburg, India, Greece, Italy, Vienna and Budapest) also had high levels of fossil fuel dependency.

We are a decade on from the financial crisis which caused so much suffering in Ireland and globally. When one considers how little is known about the systemic risks posed by climate change to the stability of the financial system, and the challenges associated with measuring and managing these risks, it is somewhat concerning. Having said that, the Governor of the Central Bank has now identified climate risk as a central concern, and has made an important first contribution to the debate.