This blog discusses some of the key themes of Klaus Regling’s address to the IIEA on 3 February 2021, on the topic of the reform of the ESM Treaty. 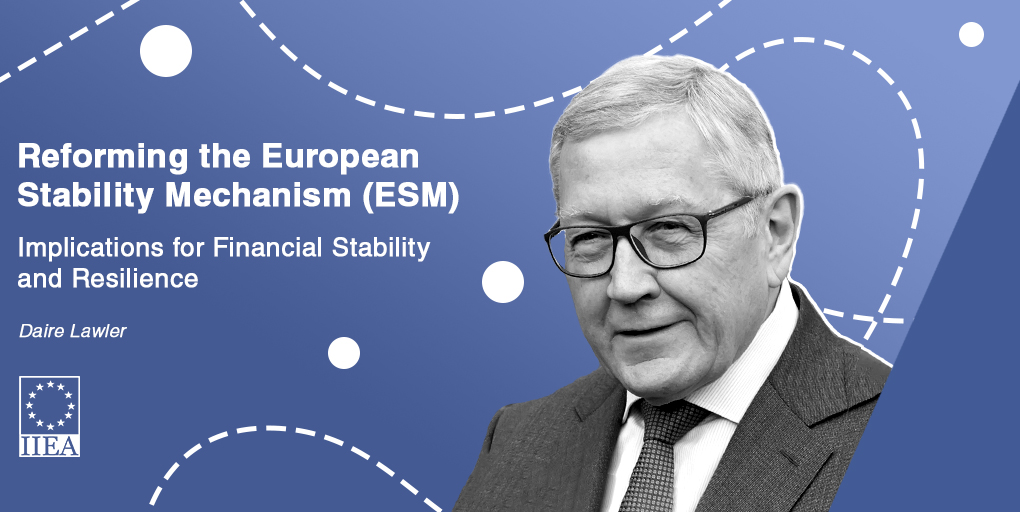 On 27 January 2021, members of the ESM, comprising the 19 euro area Member States, signed the revised European Stability Mechanism (ESM) Treaty which will next go to the national parliaments for ratification. It is expected to enter into force in 2022 once the ratification process is completed. This reform is regarded as a crucial step in strengthening the Economic and Monetary Union (EMU) and is seen as a complement to measures set up to support economies in distress due to the pandemic. It follows an agreement by finance ministers in the euro area in November 2020 to proceed with reforms to the ESM Treaty.

Against this backdrop, Klaus Regling, Managing Director of the ESM, addressed the IIEA on 3 February 2021 regarding the reforms to the Treaty and their implications for financial stability and resilience across the euro area. Mr Regling provided an outline of the changing role of the ESM since the global financial crisis and the ESM’s response to COVID-19. Furthermore, he offered his perspective on strengthening EMU in the years ahead.

Reform of the ESM

Mr Regling outlined the suite of reforms which are included in the new ESM Treaty and their intended policy objectives. He added that Ireland’s Minister for Finance, and President of the Eurogroup, Paschal Donohoe, was instrumental in agreeing the reforms achieved at a European level. While the measures will bring the euro area closer to a Banking Union and will deepen the EMU, they will also assist in tackling the economic fallout from the pandemic.

There are three key components of this reform:

The first major reform to the ESM Treaty will allow the ESM to act as a common backstop to the Single Resolution Fund (SRF) and establish a credit line between the ESM and the SRF. This is comparable to the United States where there is a similar instrument to the SRF known as the Federal Deposit Insurance Corporation (FDIC) which has a credit line with the Treasury. Since the euro area does not have a Treasury, it is prudent to ask the ESM to fulfil this role. The SRF is financed by the banking sector but in the event that it becomes depleted, the ESM will now be in a position to lend to it with contributions repaid by the banking sector over three to five years. The Eurogroup agreed to bring forward the implementation of the backstop from 2024 to 2022 due to sufficient risk reduction in the banking sector.[1]

The second component of ESM reform deals with its precautionary credit lines and establishes new rules for accessing them. Countries seeking access to the ESM will not have to sign a Memorandum of Understanding (MoU) but will instead, sign a Letter of Intent (LoI) stating that they will comply with the ESM’s eligibility criteria for accessing precautionary credit lines. These criteria include a general government deficit not exceeding 3% of GDP in the two years prior to a request for a precautionary loan, a general government structural budget balance at or above the country specific minimum benchmark, a debt/GDP ratio below 60% or a reduction in the differential with respect to 60% over the previous two years at an average rate of 1/20 per year.[2]

The role of the ESM in Ireland’s bailout programme

Mr Regling provided an outline of the conditions which underpinned the origins of the ESM and the role which the ESM and its predecessor, the European Financial Stability Facility (EFSF), played in assisting Ireland financially during its bailout programme.

Between 2011 and 2013, the ESM and the EFSF disbursed almost €18bn in loans to Ireland as part of an overall package of €67bn. Mr Regling considers Ireland to be one of the ESM’s success stories and commended the speed with which the Irish governments of 2007 to 2011 and 2011 to 2016 took ownership over the necessary measures to reduce the debt to GDP ratio. On a European level, he viewed the responses to both the global financial crisis and the euro debt crisis to be effective.

Nonetheless, there were some key learnings from the response. In general, the EU was not well prepared for the crisis that originated in Greece and should have acted sooner. This lesson informed the decision to establish the ESM to put financial assistance programmes on a more formal footing and allow the Union to act more swiftly during potential future crises. The Irish experience emphasised the need to deal differently with banks across the EU, and this led to the creation of a Banking Union with new bail in and resolution rules.

The EU and the ESM response to COVID-19

Klaus Regling continued by assessing the difference between the current crisis and the global financial crisis.

He concluded that the current situation does not require a conditional approach in the same manner as did the previous crisis. In contrast to the global financial crisis in 2008, EU Member States were hit by a symmetric external shock in 2020 that was not underpinned by macroeconomic imbalances or policy decisions by national governments. As such, supports such as the ESM’s Pandemic Crisis Support instrument and the European Commission’s SURE instrument are granted on the sole condition that Members allocate the funds to address the economic consequences of the pandemic.

In addition, the existence of the ESM’s precautionary credit line of up to 2% of a country’s GDP has served to calm the nerves of the markets and provide reassurance during the crisis. Taken together, the ESM’s measures along with the NextGenerationEU fund and the measures undertaken by the ECB have acted to protect the Single Market and the cohesion of the euro area.

Klaus Regling’s address also dealt with the issue of broader reforms to deepen the EMU in the years ahead.

He highlighted the need to achieve progress on a common European Deposit Insurance Scheme (EDIS). This would be a further step towards completing the banking union and ensuring greater stability within the banking sector.

Another important step Mr Regling highlighted was progress on achieving a Capital Markets Union (CMU), which he argued would increase cross-border investments and risk sharing as well as opening up new ways of financing for European companies.

Achieving progress on both of these proposals are among the top priorities of the Portuguese Presidency’s economic and financial agenda, as outlined at January’s ECOFIN meeting of European finance ministers.[3]

Mr Regling heralded the progress of the European Union in issuing more safe euro-denominated debt. AAA and AA+ rated debt issued by 6 of the 19 national governments, the European Commission, the EIB and the ESM now accounts for 40% of the GDP of the euro area. Nonetheless, while significant progress has been made, this figure is only half of the equivalent figure for US dollar safe assets. He argued that Europe should continue to make progress towards developing a larger amount of safe European assets as it will facilitate greater investment diversification for national banks which are compelled to purchase safe assets as part of their regulatory requirements. National banks purchasing sovereign debt face the issue of sovereign exposure and it therefore makes sense to diversify the pool of European safe assets that banks are capable of investing in.

Mr Regling called for a greater harmonisation of Eurozone fiscal policy in the form of the establishment of an instrument to provide the fiscal capacity for macroeconomic stabilisation in the euro area. This facility would be distinct from the structure of the EU Multiannual Financial Framework (MFF) as it would not take the form of a common euro area budget but would be a revolving fund which could be drawn upon by euro area countries in economic distress. Mr Regling noted this would provide a larger fiscal space for countries experiencing an economic downturn than is currently the case.

He also supported a reform of the Stability and Growth Pact as necessary given the current crisis. Given that debt to GDP ratios are currently high across the euro area due to the large fiscal stimulus in response to the pandemic, reducing the debt to GDP ratio to 60% over a 20-year horizon as detailed in the Stability and Growth Pact would represent too rapid a fiscal tightening. This would also not be necessary given the low interest rate environment that European economies now find themselves in.

Furthermore, it was also highlighted that since the global financial crisis, there is no longer an effective system to calculate structural fiscal deficits upon which the Stability and Growth Pact relies. The structural fiscal deficit refers to the component of the government deficit that is not related to the dynamics of the business cycle. Output gaps and potential growth rates have become more difficult to measure accurately since the 2008 financial crisis.

Mr Regling expressed the hope that Europe will be capable of reaching a consensus on the reform of the Stability and Growth Pact within the next 18 months.

The reform of the ESM Treaty and the new functions it confers on the ESM will act as an effective mechanism to better prepare the EU for future crises. The common backstop to the Single Resolution Fund, the enhanced and more coordinated role of the ESM in financial assistance programmes and the measures to streamline access to precautionary credit lines should work to bolster market confidence in times of distress for economies of the euro area. While it is hoped these measures will never have to be utilised, as Mr Regling noted during his address, “sometimes it’s enough to know you have an insurance even when you don’t intend to use it”.

Much work remains to provide greater stability and resilience to Europe’s banking and financial system, as work continues throughout the Portuguese Presidency to advance proposals on EDIS and the CMU. Questions remain regarding the future of the Stability and Growth Pact after its general escape clause was activated in response to the COVID-19 pandemic to allow for a temporary suspension of the fiscal rules.

It is undeniable that the EU’s crisis response capabilities are better coordinated at an institutional level than during the global financial crisis, when the ESM did not exist and countries such as Ireland were forced to rely on the troika for financial assistance. As Europe once again tackles an unprecedented continent-wide economic crisis in 2021, the response of the EU across all of its institutions has highlighted that it is better prepared and more resilient in the face of the challenges that lie ahead.