On 5 November 2015, the text of the Trans Pacific Partnership (TPP) was released, one month after the conclusion of negotiations. 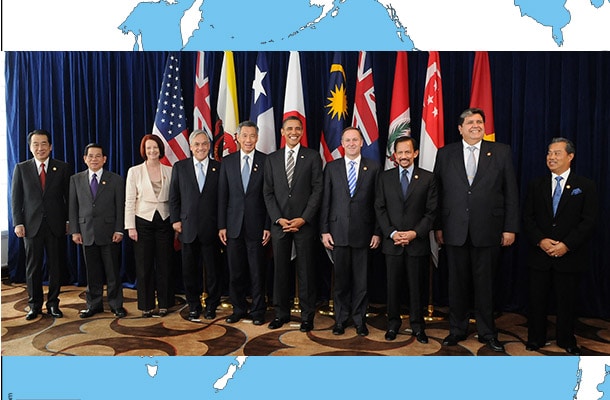 On 5 November 2015, the text of the Trans Pacific Partnership (TPP) was released, one month after the conclusion of negotiations.  Agreement on the text was reached between the United States and eleven Pacific Rim countries after almost six years of negotiations. The proposed TPP will reduce or eliminate tariff and non-tariff barriers to trade across the Pacific region. It is arguably the largest regional free trade agreement negotiated in a generation. Its twelve members are some of the world’s most robust economies, accounting for more than 40 percent of world economic output and roughly one-third of world trade. The trade agreement will reduce tariffs across most goods and services and aims to create a ‘gold standard’ in environmental and labour policies.

Although the terms of the agreement are agreed, it will not enter into force until either all members ratify the agreement domestically, or until at least six of the original signatories, who represent 85 percent of the total GDP of the twelve original members, successfully ratify the deal. For the agreement to be finalised, it must have the support of the United States, where it remains a contentious issue, as it alone constitutes nearly 62 percent of the GDP of the twelve original signatories.

The Trans Pacific Partnership in the United States

In June 2015, the US Senate voted in favor of the Trade Promotion Authority (TPA) bill that gave President Obama fast-track authority to finalise negotiations with the other Pacific Rim countries. The trade promotion bill, signed by President Obama, reestablished an expedited legislative process for the US President to submit trade deals to Congress, which can only be accepted or rejected, but can not be amended or filibustered. As the TPA expired in 2007, passing the trade promotion bill was seen by many as an essential step for finalising negotiations on the TPP.

Only 28 of the chamber’s 188 Democrats supported granting the President fast-track authority. As a result, the trade promotion bill passed on Republican strength by a simple majority of 218-210. President Obama now faces the difficult task of securing approval of the trade agreement from both Democrats and Republicans in Congress in the run up to the 2016 Presidential elections.

Democrats and labour unions are sceptical of the TPP and fear that the trade agreement will be similar to the North Atlantic Free Trade Agreement (NAFTA), which was signed into law by President Bill Clinton in 1993. Critics argue that NAFTA, the trade agreement with Mexico and Canada, resulted in loss of jobs and wage decreases in the United States. In the case of the TPP, there is a fear that the ‘rule of origin’ provision would result in a loss of American manufacturing jobs particularly in the automobile industry.

Though Republican support has been indispensible in the debate, not all Republicans are in favour of the trade deal and there are concerns that their support will decrease by the time the TPP reaches Congress due to a number of propositions included in the TPP package. In particular, Republicans fear that the tobacco ‘carve out’ proposition would damage the American tobacco industry and set a dangerous precedent for future negotiations. The carve out proposal would grant signatories the right to regulate manufactured tobacco products in efforts to improve public health and prevent tobacco companies challenging these regulations under the Investor-State Dispute Settlements tribunals (ISDS). As the majority of Democrats are expected to oppose the TPP in Congress, a marginal loss of Republican support could see the end of the TPP agreement.

TPP and the Presidential Elections

The close timing of the TPP negotiations and the US Presidential election has made the TPP an important issue in candidates’ campaigns.

Currently there are no Democrat candidates supporting the TPP deal. When Hillary Clinton was Secretary of State, she initially supported the trade agreement, however in a recent interview with PBS News Hour2 Ms. Clinton stated: “As of today, I am not in favour of what I have learned about it.” Rep. Ron King of Wisconsin, chairman of the New Democrat Coalition, suggested that Hillary Clinton’s change in position was an attempt to better position herself in the democratic primaries. Democratic Senator Bernie Sanders’ strong opposition to the TPP gained him support in the polls. On the conclusion of the agreement between the pacific nations, Senator Sanders called the deal “disastrous” and argued that the TPP favors the interests of large multinational corporations at the expense of workers, consumers and the environment.

Republican candidates are divided on the issue. Jeb Bush, Former Governor of Florida, and Marco Rubio, Senator from Florida, both support the TPP on the grounds that the reduction in tariffs will create greater commerce and business opportunities for American companies. On the other side, Donald Trump has been vocal in his opposition to the trade deal, attacking the negotiations for their lack of transparency and for representing corporate interests. Opposition to the deal from high profile Democrat and Republican Presidential candidates, in the middle of primary-state voting, presents a serious hurdle for the final passage of the deal. Many consider Hillary Clinton the frontrunner for the Democrat candidacy, and her opposition in particular places pressure on pro-trade Democrats.

The White House released the text of the TPP at the same time as President Obama announced his intention to sign the deal. This satisfied the requirement that the TPP be made public for a minimum of sixty days before Congress can vote. President Obama’s administration must submit to Congress a list of required changes to US law to accommodate the TPP agreement within sixty days of entering the agreement. The US International Trade Commission will then produce an economic impact assessment of the TPP.  The final text of the agreement must be published 30 days prior to introducing the implementing legislation. After the legislation is introduced, the House would have to hold a vote within 60 days and the Senate would have to vote no more than 30 days after the House.

Though Congress could begin considering the TPP in early February, 2016, the decision of when to formally begin discussions rests with Congressional leaders and will depend on the speed at which the administration can prepare the implementing legislation.

It is likely that the length of time required to finalise such a complex agreement will take the vote into the run-up to the November 2016 elections, which would risk the TPP becoming even more entangled in campaign politics. Alternatively, President Obama could delay submitting the final TPP text until the ‘lame duck season’, after the elections and during the last months of his term. This may help to remove some of the politics from the TPP debate, however candidates may feel obliged to fulfill campaign promises. It is also possible for President Obama to wait for the next administration to push the TPP through Congress. The NAFTA was signed in the last months of George H.W. Bush’s presidency, and Congress did not give their approval for the deal until nearly a year after. It was President Clinton who eventually signed the trade deal. However, the TPP has proven controversial among candidates thus far and the new US President may oppose the TPP.

If the Trans Pacific Partnership enters into force, it will impact a wide range of industries including agriculture, automobiles and tobacco. In 2012, a report from the Pearson Institute for International Economics, estimated that the TPP agreement could yield annual global income gains of $295 billion and this reduction in tariffs in the Asia Pacific region could offer gains of $1.9 trillion4. For these reasons, the TPP represents a significant opportunity for President Obama to bolster his trade and foreign policy legacy. However, as Wisconsin Representative Paul D. Ryan commented, if President Obama wants to avoid becoming a “very lame duck president”, he must win the support of Republicans and members of his own party, which could be the biggest obstacle for the TPP yet.