This blog provides an analysis of the importance of a free and pluralistic media in the context of the debate on upholding the rule of law within the European Union. 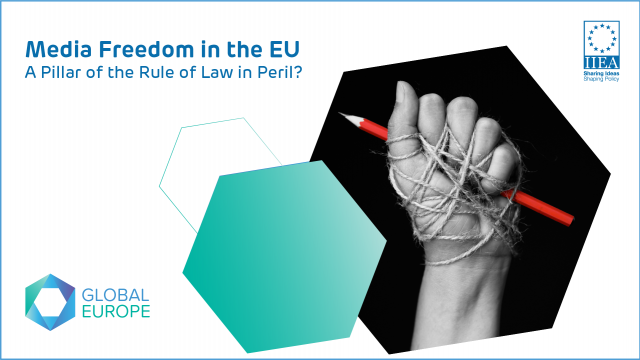 One of the key priorities of the current Portuguese Presidency of the EU is to develop a Resilient Europe, focusing on a European Democracy Action Plan to allow informed decision-making free from unlawful interference and manipulation based on lessons learned from the COVID-19 crisis. Generating a debate about media freedom, media pluralism and access to information was also a key objective of the European Commission’s Rule of Law Report 2020  which devoted an entire section to media pluralism and media freedom within the EU. The Report was envisaged as a new preventive tool to enable the EU to look at key developments across the EU and pre-empt challenges to the rule of law before they become entrenched.

The Commission’s Rule of Law Report 2020 focuses on three pertinent rule of law tenets: Judicial Independence, Anti-Corruption and Media Freedom. The centrality afforded to media freedom in this report is well-placed; an independent media and the transparency which accompanies investigative journalism play an important role in ensuring accountability of governments in their use of power. On 10 March 2021, European Commission VP, Věra Jourová, affirmed the role of the media in creating an ‘enabling ecosystem’ for upholding the rule of law, at a plenary debate of the European Parliament, stating that the “media are not just an economic sector, but an important pillar of democracy and the rule of law”.

However, freedom of the media is not consistently observed across the EU and varies across the Member States, and is, like the rule of law “achieved through successive steps, and never fully”, according to the Venice Commission of the Council of Europe.

While the Rule of Law Report focuses on issues such as the independence of the media, regulatory authorities, transparency of media ownership, state advertising, the safety of journalists and access to information, certain recent measures across the EU have raised concerns about attempts to undermine both media freedom and media pluralism. Serious allegations have been made in the European Parliament regarding the imposition of restrictions on free media in several EU Member States, namely Hungary, Poland, Bulgaria, Slovenia and Czechia.

The Limits of Power

The Commission has limited ability to take corrective action due to the current status of the media as “economic actors” in the European Single Market, as opposed to ‘key players in democratic society’, according to VP Jourová. This dichotomy between the economic and the political raises questions around how best the Commission can address media pluralism and media freedom concerns.

Retaining a focus on the important role of a free and independent media in enabling adherence to the rule of law in a democracy is an important aspect of this debate. There is an inevitable and necessary tension between the political establishment and the news media, as the media play a vital role in holding governments accountable and scrutinising those in power, which often means that journalists must operate in the shadow of threats and harassment.

The European Commission Rule of Law Report 2020 outlined how threats and attacks on journalists have the effect of shrinking public debate and eroding a key pillar of rule of law architecture. Furthermore, it highlighted how concurrent rule of law challenges by certain Member States, and threats to media freedom and media pluralism are compounded by instability in other pillars of rule of law such as judicial independence and effective systems of checks and balances.

In an attempt to address rule of law concerns in the EU, Member States attached a rule of law conditionality mechanism to the allocation of the EU budget 2021-2027. However, following a joint referral by Hungary and Poland on 11 March 2021 to the Court of Justice of the EU (CJEU) on the legality of this mechanism, the European Commission must now await the CJEU ruling before proceeding with its implementation.

Laurens Hueting,  Advocacy Officer at the European Centre for Press and Media Freedom, has proposed an alternative approach: namely that the European Commission use its wide armoury of competition law and internal market rules to end Member States’ government discrimination against certain media outlets through advertising budgets or regulation. This potential use of competition policy to address distortions in the media market was also highlighted by the International Press Institute (IPI) and 15 other media freedom groups in a  letter which they sent to Commission VP Margrethe Vestager on 26 February 2021.

Recently, other measures to strengthen the media include a Commission proposal that the recovery package from the EU budget could help address immediate liquidity needs, while the digital investment and resilience of the media sector would also be strengthened through InvestEU, Creative Europe, and Horizon Europe Programmes.

The chilling effect of measures aimed at curtailing media freedom on democratic society and the wider implications for the rule of law in the EU are difficult to quantify. These measures signal that this pillar of the rule of law is under threat, but not in immediate peril. Maintaining a free and pluralistic media is, to a large extent, a competency which resides with the Member States. However, the European Commission has certain political competencies such as the rule of law conditionality mechanism and the Article 7 procedure; as well as economic competencies in competition law which are designed to address distortions in market power. Other soft power instruments include the Democracy Action Plan and the AVSMD.

The impact of the COVID-19 pandemic has further confirmed the key role of a free media by supplying fact-checked information to counter the proliferation of disinformation.  Tackling the so-called “infodemic” highlights the role of the media in revealing how measures can be abused for political purposes. Yet, the COVID-19 pandemic has delayed Article 7 hearings at the Court of Justice of the EU, as these must be heard in person.

The Commission’s Rule of Law Report 2020 concludes by encouraging all Member States to engage in dialogue with stakeholders at a national and EU level. It is envisaged as a tool to generate debate across all Member States on media freedom and media pluralism. However, the decision by Poland and Hungary to challenge the rule of law conditionality mechanism before the CJEU; the absence of Article 7 hearings due to the COVID-19 pandemic; and uncertainty about the potential impact competition law rules, suggest that vigilance is required with regard to rule of law concerns in the area of media freedom.

Past EventsGlobal Europe Past Events UN
14th May 2021