This blog evaluates the extent to which the European Commission’s new LGBTIQ equality strategy (2020-2025) fills the legislative gaps in terms of providing greater rights protection to LGBTIQ people across the EU. 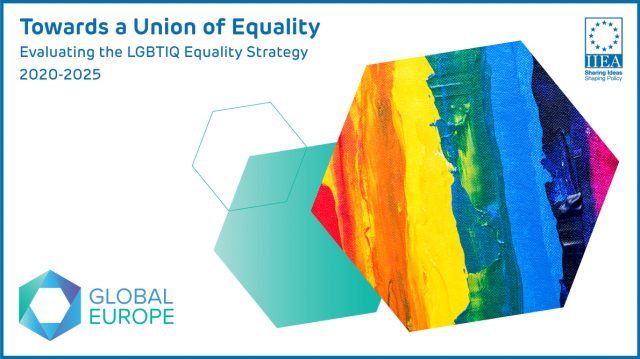 On 12 November 2020, the European Commission launched its new LGBTIQ Equality Strategy, marking an important milestone in the decades-long fight for the recognition of equal rights for LGBTIQ people across the EU.

Data would suggest that the emergence of more equal and welcoming societies for LGBTIQ people has been steady over recent decades. According to a Special Eurobarometer from September 2019, the support in the EU for LGBTIQ equality increased from on average 71% of EU citizens in 2015 to 76% in 2019.

This cultural shift towards greater acceptance of LGBTIQ people in European societies has been driven by a wide range of legislative developments, case law and policy initiatives at both EU and Member State level.

For instance, the 1993 decriminalisation of homosexuality in Ireland was followed, in the space of a generation, by the passing of the marriage equality referendum in 2015, which underscores the huge strides that have been taken on both a legislative and cultural level in the advancement of LGBTIQ rights.

Despite the progress that has been made, the launch of the new LGBTIQ equality strategy shows that there is still a long road ahead in terms of achieving equality and non-discrimination across all EU Member States.

According to a 2019 survey, the European Union Agency for Fundamental Rights (FRA) found that discrimination on grounds of sexual orientation, gender identity/expression and sex characteristics was actually increasing in the EU: 43% of LGBTIQ people declared that they felt discriminated against in 2019, as compared to 37% in 2012.

While no single explanation is satisfactory in accounting for the prominence of anti-LGBTIQ sentiment in certain EU Member States, one factor has been an increasingly toxic culture war being waged by the religious conservative right against socially liberal EU values.

In Poland, the decision of a number of small towns to declare themselves as ‘LGBT-free zones’ was greatly influenced by the Polish Catholic Church and a conservative ruling elite intent on designating LGBTIQ rights as an ideology.

In Hungary, the government’s recent proposal to introduce legislation that would ban adoption for same-sex couples is part of a broader anti-LGBTIQ legislative agenda that has already clamped down on the fundamental rights of LGBTIQ people around the country.

Against this background, the new LGBTIQ equality strategy could not have arrived at a more opportune moment. The widespread discrimination and continued lack of equality across the EU underscores the urgent need to bolster the existing legal frameworks designed to protect the rights of LGBTIQ people. The new strategy sets out to do this by addressing gaps in the existing EU law across four pillars:

The extent to which the new LGBTIQ equality strategy manages to remedy the existing gaps in the legislation across the four pillars will be a key indicator of its long-term success and will be fundamental to extending protections to LGBTIQ people across the EU. The remainder of this blog evaluates how these four pillars seek to bolster the legal protections for LGBTIQ people by filling in certain gaps in EU law before offering some concluding observations.

The Employment Equality Directive prohibits discrimination on the grounds of religion or belief, disability, age or sexual orientation in employment, occupation and vocational training contexts. However, the impact of this directive in eradicating discrimination has been limited in two ways: it does not apply outside of employment, occupation and vocational training contexts and it faces considerable challenges to its application at Member State level.

The Commission has committed to tackling these shortcomings by reporting on the Directive’s application in 2021 and bridging any legislative gaps with proposed legislation by 2022.

Furthermore, the introduction of a new Equal Treatment Directive, which has been blocked by the Council since 2008, would close certain gaps in how EU law protects against LGBTIQ discrimination by extending the prohibition of discrimination on the grounds of sexual orientation beyond the area of employment and vocational training.

Legal protections against anti-LGBTIQ hate crime and hate speech vary considerably across EU Member States. At present, seven Member States do not expressly include sexual orientation in hate speech and/or crime legislation as an aggravating factor.

One of the strategy’s key proposals to combat this deficit in hate speech and hate crime legislation is to organise discussions with national authorities and civil society organisations to exchange best practice on implementing national legislation in these areas.

To complement this, an initiative will also be presented in 2021 to extend the definition of crimes as recognised under EU law to cover hate crime and hate speech, including when targeted at LGBTIQ people.

Moreover, the proposal to introduce a Digital Services Act before the end of 2020 could potentially have important implications for combating online anti-LGBTIQ hate speech. While the proposal will not define what is considered hate speech as such, it will aim to address more effectively all types of illegal content hosted on various types of platforms, ensuring greater respect for the fundamental rights of LGBTIQ people.

It is widely recognised that there are a wide range of family models across EU Member States, including so called ‘rainbow families’ with one or more LGBTIQ members. Regrettably, differences in family law across Member States have sometimes led to family ties ceasing to be recognised when rainbow families move across borders, a situation which has been exacerbated by the pandemic lockdown measures. In addition, trans, non-binary and intersex people are often not recognised in law or in practice in many Member States, creating further difficulties in cross border situations.

The strategy aims to address this situation in a range of different ways. First, it will continue to ensure the implementation of the Free Movement Directive, with particular regard to addressing the difficulties faced by LGBTIQ people and their families. Second, it plans to review the 2009 guidelines on free movement by 2022, in order to improve legal certainty for LGBTIQ people and rainbow families exercising their free movement rights. Third, there will be an increased focus on ensuring the rigorous application of cross-border family law vis-à-vis rainbow families.

Fourth Pillar: Leading the call for LGBTIQ equality around the world

While recognising that LGBTIQ people continue to face serious rights violations across the EU, the situation is even more precarious in other parts of the world. According to a report from the UN Independent Expert on sexual orientation and gender identity from 2018, same-gender relationships are still criminalised in 72 countries.

While no specific legislative measures are identified under this pillar, the new strategy acknowledges that working to improve the legal protections for LGBTIQ people in EU Member States must go hand in hand with the EU’s external actions in this area in order to ensure consistency with internal and external policy.

Moreover, in the context of any further EU enlargement, accession negotiations and the stabilisation and association process will require LGBTIQ equality to be included in the political dialogue as well as the support measures to tackle violence, hatred and discrimination against LGBTIQ people.

On balance, the new LGBTIQ equality strategy goes a long way to rectifying many of the existing legislative gaps concerning the protection of LGBTIQ people under EU law, while leaving much room for improvement in other key respects.

Nonetheless, the four pillars offer a clear framework for identifying and addressing many of the key issues concerning the protection of LGBTIQ rights in the EU. Moreover, they are articulated with regard to specific timelines, address key legislative issues and identify the areas in which the Commission is willing to offer technical help to Member States.

In addition, EU funded programmes will be closely monitored to ensure they respect equality principles. In cases where such principles are breached, the EU has committed to withdrawing funding. The recent decision by EU Equality Commissioner, Helena Dalli, to strip a number of Polish towns of EU funding is evidence that the Commission is willing to put its money where its mouth is in this regard. Arguably, decisive action such as this will prove essential to ensuring accountability for LGBTIQ rights protection in the face of growing pushback in certain Member States.

Moreover, the commitment to a holistic approach, whereby LGBTIQ equality will be mainstreamed across all EU policy areas, legislation and funding programmes represents a significant step forward in terms of ensuring that LGBTIQ issues are not left to wither on the vine.

On the negative side, the requirement in the strategy for Member States to take the lead in implementation is likely to lead to the same problems that have hampered the advancement of LGBTIQ rights for decades.

For instance, the envisioned horizontal directives are likely to face serious pushback and trigger sovereignty-based arguments from certain Member States.  Moreover, the aspirational nature of many of the actions identified under the four pillars are unlikely to spur the urgent legislative changes necessary in those Member States where anti-LGBTIQ legislation has recently been enacted.

Finally, while the new strategy can be commended for adding to a rich tapestry of existing legislative and policy initiatives aimed at protecting and promoting LGBTIQ rights, it fails to offer any novel means of adequately addressing the root causes of discrimination that exist across EU Member States. Arguably, eradicating discrimination against LGBTIQ people entirely is a longer-term, multi-generational project which will require a holistic approach that goes beyond legislation and policy and is anchored in a fundamental reshaping of socio-cultural attitudes towards the most vulnerable people in society.