This blog analyses the content and potential implications of the European Commission’s Trade Policy Review which aims to sets the direction and tone of a more open, sustainable and assertive EU trade policy in an increasingly competitive and uncertain world. 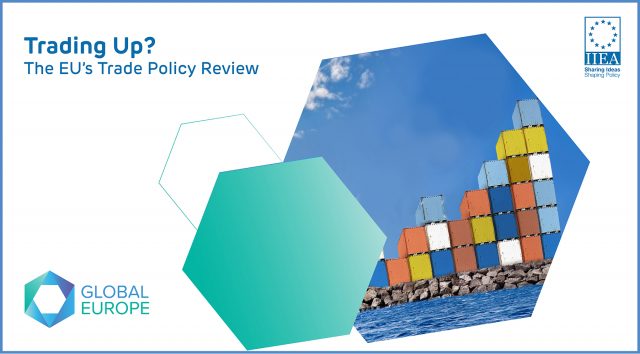 Published on 18 February 2021, the European Commission’s Trade Policy Review (TPR) Communication, “An Open, Sustainable and Assertive Trade Policy” aims to set the direction and tone of EU trade policy in an increasingly competitive and uncertain world. This strategic vision is underpinned by “open strategic autonomy”, which emphasises;

Most EU observers are aware that trade is an exclusive EU competence, where the European Commission negotiates on behalf of Member States who initiate discussions and ultimately decide (with or without the European Parliament) on the agreement reached. The TPR has emerged against a backdrop of various global challenges to trade, such as: climate change, COVID-19 recoveries, international political tensions, global supply-chains issues, and digitalisation. All of these issues require a coordinated EU response and modernisations of the EU’s trade policy.

The EU’s trade policy aims to support the European Green Deal and Digital Strategy goals and reinforce the EU’s geopolitical ambitions and resilience through open strategic autonomy. It seeks to position the EU as an independent champion for multilateralism, and a collaborative leader in setting global standards for free and fair global trade. As outlined by European Commission Executive Vice-President and Trade Commissioner Valdis Dombrovskis speaking at the IIEA, under the TPR the EU is both asserting a new approach to achieve open and sustainable trading practices and also attempting to better protect Europe’s interests, values, citizens and firms.

The key objectives of the TPR are:

The EU’s influence in global rule-setting gives it a competitive advantage in determining internationally accepted standards, such as the General Data Protection Regulation (GDPR), asserting EU values through trade and ensuring its trade partners uphold their obligations. The TPR highlights the EU’s regulatory power as a strategically significant geopolitical tool to secure the Union’s strategic autonomy and maintain a global level-playing field for trade.

A strong focus on WTO reform “across all of its functions” is at the heart of the EU’s more strategic approach to regulation to set global standards. Forging coalitions with like-minded partners, while circumventing potentially obstructionist members, is at the core of the EU’s strategy to build consensus for reform within the WTO and to maintain its influence as the majority of the world’s future economic growth will occur outside Europe.

Modernisation of the WTO’s rules and dispute-settlement mechanisms to better facilitate digital and more sustainable trade is key to the EU’s goal. The EU plans to use the WTO forum to launch negotiations on rules to address state distortions to competition as well as global standards in data-sharing practices and regulations on the use of artificial intelligence. These efforts will be complemented by fostering closer ties through fora like the proposed EU-US Trade and Technology Council, to ensure global trade standards are more democratic, open and inclusive.

While the EU would prefer to resolve trade disputes through the WTO, it has also developed enforcement measures in response to the US blocking of appointments to the WTO’s Appellate Body, which handles trade dispute settlements. In order to achieve this there needs to be better monitoring and enforcement, in conjunction with Member States, of the EU’s trade agreements. The EU’s Chief Trade Enforcement Officer, Denis Redonnet, will need to ensure that enforcement is both timely and efficient. This is an important step in demonstrating and maximising the value of EU trade deals to consumers and firms which will protect them against uncompetitive practices. To support this the EU will propose new instruments to address third country investment financing with countervailing duties and an “anti-coercion” instrument. Three further features of the TPR are noteworthy in asserting the EU’s values and interests: Member States’ foreign direct investment screening mechanisms, an export control regulation for sensitive dual-use technologies, and finalising the International Procurement Instrument to ensure a level-playing field for public procurement.

The Communication aims to align trade policy with the EU’s climate and environment ambitions, by taking account of the Paris Climate agreement through incorporating sustainability criteria into all future EU trade agreements and calls for binding commitments to protect biodiversity. This aspiration as a climate leader is evident in the EU’s call for G20 countries to incorporate IPCC climate neutrality criteria into all future trade and investment agreements. Measures like a Carbon Border Adjustment Mechanism and sustainable corporate governance legislation complement the call to use the EU’s global human rights sanctions regime to prevent “carbon leakage” and abusive labour practices within EU supply-chains.

The potential geopolitical implications of EU trade policy affect both the EU itself and third countries in its immediate Neighbourhood and further afield.

Closer policy integration means better coordination between externally focused policies, such as migration, and the internal focus, like industrial or competition policy. A specific example is how the EU’s trade policy could support the New Pact on Asylum and Migration by addressing the “root causes” of irregular migration.

Increased uptake of EU regulations and standards by countries bordering the EU, like the Western Balkans, Georgia, Moldova and Ukraine, would bring them closer to EU markets, supply chains and investments. This voluntary integration into EU standards, norms and effective extension of trade policy could be recompensed through participation in relevant EU expert groups and closer association with EU standardisation bodies. Similar “win-win” opportunities are underscored in EU relations with its Southern Neighbourhood, and the possibility of modernising trade negotiations with Tunisia and Morocco to meet “modern” challenges suggests possible near-shoring of critically sensitive manufacturing to Europe’s borders. EU relations with other close neighbours are, however, less clearly detailed.

On the other hand, agreements with Switzerland and Turkey are to be modernised if the “right conditions” are met. In contrast, EU-UK trade goals are merely to achieve the full potential of the existing Trade and Cooperation Agreement.

The EU-US transatlantic partnership is referred to in terms of shared democratic values and cooperation towards WTO reform, but there is little detail beyond this. Relations with China however are two-fold; on the one hand, the TPR encourages concerted engagement with China to assume greater global obligations on climate and biodiversity. On the other, the TPR also recommends tackling the negative spillovers of China’s state-capitalist model and considerable economic heft. As a longer-term EU strategic concern, continent-to-continent trade with Africa will be prioritised, based on implementation of the African Continental Free Trade Area, and the future possibility of harmonising rules of origin between the African Union (AU) and EU. In addition to enhanced AU-EU political dialogue, the focus is on a partnership as equals. The focus is on incorporating sustainability development initiatives into new and existing agreements. Little attention is paid to other key actors, such as India which is only mentioned briefly, relations with Latin American and Asia-Pacific are framed solely in terms of sustainability criteria for trade, and Europe’s extensive trade links with Russia are not mentioned at all.

So, is the EU really trading up with the new TPR? The new approach is certainly pointing in the right direction. To achieve its goals, the EU will need to cultivate alliances with like-minded partners, and to assert itself in an increasingly multipolar world recovering from COVID-19. Although reform and standard setting will be slow and incremental, demanding patience, investing in a long-term strategic view will ultimately reap benefits for the EU. Whether trading up to an open, sustainable and assertive trade policy will enable the EU to position itself as a global player remains to be seen.

Forging a path to peace in Tigray: Ireland and the UN Security Council