The purpose of this blog is to examine the state of play regarding changes to fiscal rules in the context of the ongoing debate surrounding Economic Governance Reform in the EU & the COVID-19 Crisis. 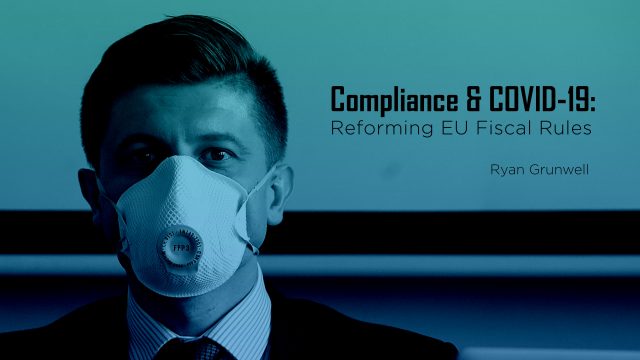 The European Commission launched a review of the current system of EU Economic Governance in February 2020. The purpose of this review is to develop a framework which better facilitates sustainable budgetary practices, economic convergence, and a greater degree of policy coordination across the EU, through a public dialogue. This process has taken on a new sense urgency in light of the COVID-19 pandemic.

Commentators have noted that the current set of fiscal rules has been a cause for friction between the so-called ‘New Hanseatic League’ of fiscally prudent states and the Southern EU member states. However, there is a consensus among experts that the current set of fiscal rules is no longer fit for purpose, despite the adoption of the ‘Six-Pack’ and ‘Two-Pack’ in 2011 and 2013 respectively. The rules are deemed to need simplification and more transparency as they have become more complex over the years.

ECOFIN suspended these fiscal rules at the recommendation of the European Commission, on 23 March 2020, and triggered the General Escape Clause of the Stability and Growth Pact (SGP) for the first time, thus relaxing the budgetary rules so that national governments could inject fiscal stimulus into the economy and support companies hit by the sudden shock of the COVID-19 pandemic. SMEs and sectors such as hospitality and tourism are at risk of mass unemployment unless they receive support.

According to a statement from EU Ministers of Finance: “The use of the escape clause will ensure the flexibility needed to take all the necessary measures to support the health and civil protection systems and economies including through further discretionary and coordinated action”.

The purpose of this blog is to examine the state of play with regard to changes to fiscal rules in the context of the ongoing debate surrounding Economic Governance Reform in the EU.

The requirement for Member States to avoid government deficits exceeding 3% of GDP and to keep public debt levels below 60% of GDP was initially established in the Maastricht Treaty (1992). This occurred on the basis of the Treaty recognising the importance of coordinating policy across Member States, in order to allow for the conduct of sound monetary policy, as part of the broader EMU framework. Specifically, it was set up to avoid two sorts of problems: first, to prevent potential risks of spillovers among Member States brought about by bad policy; and second, to prevent free-riding behaviour leading to excessive government deficits and debt levels.

Following this, the SGP was established in 1997, for the purposes of strengthening the monitoring and coordination of national fiscal and economic policies, in order to enforce the fiscal rules previously established by the Maastricht Treaty.[i] In the recessionary environment of the early 2000s, adherence to SGP targets proved challenging for certain Member States, and SGP rules were reformed to allow for greater consideration of temporary economic circumstances.

The central issue with the current set of EU fiscal rules is that they simultaneously strive to function as a corrector of suboptimal policy, and advocates of optimal policy, without the requisite tools to sufficiently incentivise states in either direction. Specifically, they cause two sorts of problems. First, the rules are broadly ineffective. Second, they have introduced a structural pro-cyclical bias to fiscal policymaking.

Despite disagreement on the best way forward, a consensus began to emerge among experts regarding the source of their inefficacy. The current set of rules are deemed to be unduly complex. For example, former Chair of the Eurogroup Working Group, Thomas Wieser, noted that “the present rules-based system of the Stability and Growth Pact has become nearly unmanageable due to its complexity, and the constant addition of exceptions, escape clauses, and other factors.”[ii] Furthermore, in order to enforce this set of rules, they need to be associated with a credible, substantive enforcement mechanism[iii], in order for these rules to provide an incentive. Another consideration is that the use of the structural budget balance in these rules introduces unnecessary uncertainty. Finally, the method of estimating potential output which is currently used, the EU Commonly Agreed Methodology (CAM), produces estimates which are subject to revision throughout the year (as well as demonstrating a pro-cyclical bias – more on this in the next section). These problems all reduce the effectiveness of these rules.

In addition to the efficacy problem of the rules, another problem is the extent to which these rules have introduced a pro-cyclical bias to policymaking. Casey and Barnes[iv] argue that this is true and is due to the methodology used (i.e. the EU CAM), and the structural incentives provided by these rules. Under the current rules, countries are only penalized for running deficits which are too large, and encouraged to reduce their deficit, if it becomes too large. However, states are not encouraged to run surpluses when the economy is doing well – meaning that states do not save sufficiently during good times, forcing them to implement austerity measures during recessions, thereby exacerbating their worst effects.

This is particularly a cause for concern for Member States, as they only have control over debt and government spending and have less control over monetary policy due to their membership of either the Eurozone or EMU.[v] Fiscal policy is the primary tool which Member States possess for responding to shocks, specifically those which affect them asymmetrically. Moreover, labour flows between Member States are too low to enable migration to form an adequate response mechanism.[vi]

Among leading academics and policymakers, several options have begun to emerge regarding the most suitable response to these challenges.

In its 2018 annual report, the European Fiscal Board proposed replacing the existing framework with the following rule: that there would be a ceiling on the growth rate of government expenditure[vii], in order to meet a target of a debt-GDP ratio of 60% across a given period. The value of this ceiling would be fixed for a period of 15 years, and subsequently adjusted to accommodate the steps to meet this target. Crucially, determining this upper bound of public expenditure growth relies on an estimate of potential output growth, in order to determine by how much expenditure might be allowed to grow.

Therefore, compliance in this scenario would be determined on the basis of whether this single rule is met or not met in the case of Member States with a debt-GDP ratio greater than 60%. This referred to 11 of the EU27 Member States as of 2019.[viii] For all other Member States, the pre-existing 3% budget deficit rule would become the only relevant constraint.[ix] Several other groups made markedly similar proposals in the run up to the publication of this report.[x][xi]

One criticism of this approach identified by Casey and Barnes[xii] is that this would still entail policymakers estimating potential output growth using the EU CAM. Instead, they propose either revising it, or switching to an alternative method of estimation, to overcome the procyclical bias of the EU CAM. In either case, they propose greater use of national independent fiscal institutions (IFIs) in the validation and development of the models which estimate potential output growth.[xiii]

In determining the preferable approach forward, a decision needs to be made regarding whether to prioritise the strict enforcement of rules, or to retain discretion for Member States through a number of exceptions. The trade-off between enforceability and optimality exists because in order for a rule to be more easily enforceable, it ought to be as comparatively simple as possible, while allowing for some caveats to account for the complexity of the world in which we live.[xiv]

Our world and our economies are changing dramatically. To counter ongoing environmental degradation, the European Commission has pledged to decarbonise by 2050. Due to the COVID-19 pandemic, Finance Ministers have agreed to suspend restrictions on borrowing and spending and the European Commission has temporarily activated the General Escape Clause of the SGP for the first time due to the major economic shock caused by the pandemic.[xv]

The current fiscal rules analysed above are no longer fit for purpose. The European Commission and some governments in the EU are engaging in the drive to reform the SGP by using fiscal stimuli, expanding bank credit, increasing subsidies for business and relaxing the budgetary rules to enable governments to steer their economies into recovery after the pandemic peaks. As these are temporary exceptions, changing the fiscal rules would give countries more autonomy and encourage better compliance in the long run.

[i] Council Regulation (EC) No 1466/97 of 7 July 1997 on the strengthening of the surveillance of budgetary positions and the surveillance and coordination of economic policies, Council Regulation (EC) No 1467/97 on speeding up and clarifying the implementation of the excessive deficit procedure and the Resolution of 17 June 1997 on the Stability and Growth Pact.

[iii] France, for example, has broken excessive deficit rules for 11 of the 30 years that they have been in place.

[vi] For example, in other currency unions, like the US, if unemployment is too high in certain areas, inter-state emigration can occur; if too low (particularly with respect to certain sectors), immigration. While theoretically, the Treaty of Rome guarantees the free movement of labour, empirically this is insufficient in the context of the EU today. Labour flows cannot act as an effective response mechanism – as they do in, for example, the US – as labour markets are substantially less integrated. Conversely, due to a composite set of linguistic, cultural and soft institutional barriers existent across the EU, only 4% of EU population currently reside in a Member State other than that to which they are native.

[x] Bénassy-Quéré, A., et al (17 January, 2018), How to reconcile risk sharing and market discipline in the euro area. Accessed on 04/12/19: https://voxeu.org/article/how-reconcile-risk-sharing-and-market-discipline-euro-area