Following the recent webinar address of Colm Brophy TD, Minister of State for Overseas Development and Diaspora, this blog considers the priorities he set out for Ireland's international development agenda. 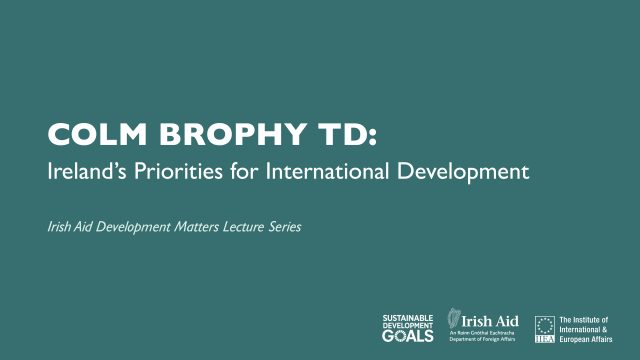 In the inaugural lecture of the IIEA’s Development Matters series, supported by Irish Aid, Colm Brophy TD, Minister of State for Overseas Development and Diaspora, laid out a broad overview of the current challenges facing international development, as well as Ireland’s objectives and his own vision for development cooperation.

In his introductory remarks to the series, Ruairí de Búrca, Director General of Irish Aid, noted that the 2021 series – the first to be run entirely in webinar format – would present a unique opportunity to engage with a more global audience. He expressed his hopes for Ireland to draw on its own experience of the COVID-19 pandemic thus far to address salient development issues. He noted the increasing interconnectivity of the pandemic and international development and their increasing impact on our daily lives.

The Minister began his address by acknowledging the current turbulent context in international affairs and global history. This, he argued, has created a more complex backdrop for the Irish Government to deliver on the objectives of its strategy: A Better World: Ireland’s Policy for International Development. Nevertheless, he remarked that Ireland’s prosperity and security are dependent on the prosperity and the security of others. As such, the Minister stressed his belief that international development is, and must remain, an essential Irish foreign policy tool.

Minister Brophy accepted the attenuated position of multilateralism in the current world order. This, he acknowledged, is a serious issue for Ireland given its focus on multilateral projects through the EU and UN. Citing Ireland’s 2020 OECD Development Cooperation Peer Review, the Minister argued that Ireland has a demonstrable track record in advocating for multilateral development cooperation and, as such, it will have a major role to play in achieving its objectives.

An important development matter identified by the Minister is the challenge posed by the climate crisis. Its effects have been, and will continue to be, most pronounced on the most vulnerable people in the world. Those in Small Island Developing States (SIDS) are already living with the consequences of climate change. The Minister highlighted that a particular challenge of the climate crisis is its interconnectivity with other important issues for global development, such as peace and security as well as achieving zero hunger.

The COVID-19 pandemic has created many challenges for the role of development cooperation in global health. Attention in Irish Aid in recent months has turned to supporting the establishment of vaccine delivery systems. The lack of capacity and expertise on the ground has made the delivery of vaccination programmes in the Global South significantly more complicated. In addition, the pandemic has had a markedly regressive effect on many of the past achievements of Irish development cooperation, especially in terms of gender equality, education, and supports for young girls to remain in education, in particular in Sub-Saharan Africa. This, the Minister stressed, has made it more important than ever for Ireland to redouble its commitment in these sectors while continuing to address the challenges posed to global health.

Minister Brophy reaffirmed Ireland’s commitment to continue with a multilateral delivery of its development cooperation. Addressing the aforementioned strains on the multilateral system, the Minister argued, will open up opportunities for Ireland to play a global leadership role. According to Minister Brophy, Ireland’s tenure on the UN Security Council (UNSC) is an important opportunity to strengthen this global leadership role in multilateral development initiatives. He remarked that Ireland’s membership of the UNSC is values-based, and that Ireland will use its role to shine a light on many of the contemporary challenges which sustainable development faces. Minister Brophy highlighted Ireland’s leadership at the UNSC on the humanitarian response to the situation in the Tigray region of Ethiopia. Ireland drafted a Security Council statement on the situation, the first of its kind from the UNSC since the conflict broke out in November 2020. He also emphasised how Ireland’s membership of the EU has added to its multilateral development capacities, as it has opened and enhanced avenues for cooperation with other EU member states, the UK and the US.

The Minister said that this year would be critical for climate diplomacy and that addressing the climate crisis would be one of the major areas in which Ireland can have an impact on the global agenda. He commended the work of Eamon Ryan TD, Minister for Environment, Climate and Communications, who recently presented Ireland’s Climate Action and Low Carbon Development (Amendment) Bill (2021) and addressed the Leaders’ Summit on Climate, which was organised by US President, Joe Biden. Further building on Ireland’s multilateral approach, the Minister stressed the importance of Ireland’s participation in COP26, a UN Framework Convention on Climate Change conference which will take place in Glasgow in November 2021. Irish Aid intends to augment Ireland’s development work in this area in advance of the conference. As part of Ireland’s “climate diplomacy”, the Minister has established a Climate Unit within Irish Aid and has set out his plan to mainstream climate action into all areas of Irish Aid’s work. Building on the €93 million contribution of 2019, Minister Brophy committed to at least doubling Ireland’s official development assistance for climate finance by 2030. These actions, he expects, will provide Ireland with an opportunity to strengthen its capacity to press for greater action at the conference.

Ireland’s development response to the COVID-19 pandemic is an opportunity for Irish Aid to further enhance its global health expertise. Minister Brophy acknowledged the increasing interconnectivity of development matters and said that it was also a chance to enshrine partnership-based approaches. The Minister paid tribute to Ireland’s longstanding global health partnerships with other development actors in Africa. Ireland’s development history on the continent, especially in terms of infection control, was helpful when the first outbreaks of COVID-19 emerged there, particularly with respect to support for frontline health workers and auxiliary mental health support. Furthermore, through a joined-up approach with the HSE, the State’s health service, Ireland has been able to share the lessons learned of its own experience of fighting COVID-19 with its partners. In 2020, Ireland pledged €150 million for the global health response and to mitigate the impact of the pandemic on its development partners. He also stated that Ireland intends to commit a further €50 million this year. Ireland is also supporting the Team Europe and COVAX initiatives, which target not only vaccine supply, but also the capacity to roll out vaccination campaigns.

Minister Brophy’s Vision and its Implications for International Development

Minister Brophy outlined that Ireland’s focus on multilateral approaches to development has the potential to not only fulfil its international development objectives, but also enhance the broader Irish foreign policy agenda too. A Better World describes multilateralism and the rules-based order as central to the furthering of Ireland’s development interests. Moreover, they form core pillars of Global Ireland: Ireland’s Footprint to 2025 as well as the Strategy for Africa to 2025. Both documents underscore the need for multilateralism to help Ireland identify and work with like-minded countries and institutions. In that sense, Ireland’s development and humanitarian work as a member of the UNSC will not only be useful in these sectors alone, but they have the potential to further Ireland’s reputation as a reliable multilateralist more generally. This notably goes hand in hand with the EU’s ambition to leverage the collective strength of its Member States in the global community, as outlined in the recent EU Joint Communication on multilateralism.

The Minister’s advancement of climate diplomacy has the potential to not only further Ireland’s response to the climate crisis but to a host of other development challenges as well. Irish Aid recognises the increasing uncertainty that farmers face as a result of the climate crisis and intends to develop a response grounded in investment in education. In advance of the September 2021 UN Food Systems Summit, Ireland intends to play a leadership role by balancing the economic and societal aspects of food systems with the environmental aspects. Ireland’s experience of famine combined with its latest climate commitments, the Minister proposed, would make its actions more credible in this regard. He also recognised the increasing importance of the climate-security nexus. Understanding and acting on the interconnectivity of these issues allows Ireland to identify and protect the most vulnerable, such as people in the SIDS. In doing so, this allows Ireland to play a more vocal role in such discussions at an international level, as well as make the best use of existing development funds in these areas.

Ireland’s responses to the COVID-19 pandemic in terms of development assistance could have long-lasting implications for how much can be achieved in other areas of development in the future. In this respect, Minister Brophy noted the disconcerting number of young girls who dropped out of education during the pandemic and who will most likely never return. This compounds the difficulty in ensuring high quality education for young girls which is already inhibited by other contributing factors such as the cost of secondary education, domestic responsibilities, early marriage and early pregnancy. Moreover, it can contribute to the replication of the poverty cycle. To mitigate against COVID-19’s exacerbation of challenges to girls’ education, the Minister approved a €2 million to Education Cannot Wait, a global fund established to transform the delivery of education during emergencies. He also stated that he intends to announce further support for the Global Partnership for Education platform, one of Ireland’s longest-standing and largest education partners.

Together, the challenges of multilateralism, the climate crisis and the COVID-19 pandemic have all made the delivery of international development and the achievement of the Sustainable Development Goals more difficult than ever before. Nevertheless, through its membership of the EU and UN and by addressing the needs of the most vulnerable on the ground, the Minister remains confident that Ireland can rise to meet these challenges.

The Transatlantic Economy: An Economic Outlook for 2021