In this blog, Noel Fahey discusses the opening of Ireland’s EC accession negotiations in 1970, and highlights a number of issues from those early discussions that remain pertinent to this day. 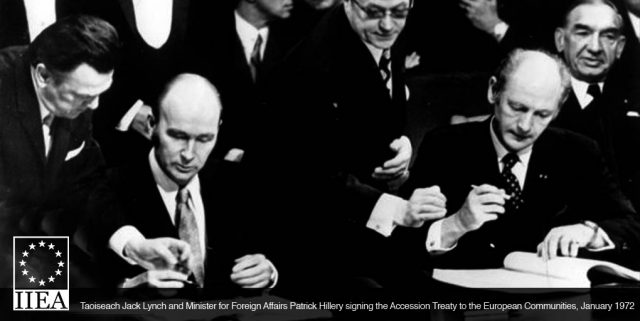 Fifty Years ago, on 30 June 1970, an Irish delegation travelled to Luxembourg to participate in the opening session of the negotiations that led to Ireland’s membership of the European Communities and eventually of the European Union. The meeting participants were the original Six member States and the four applicants – the UK, Denmark and Norway as well as Ireland.

The Irish delegation was led by Dr Patrick Hillery, Minister for Foreign Affairs. It included officials from the four government departments most directly involved in the negotiations: Foreign Affairs, Finance, Industry and Commerce (as Enterprise, Trade and Employment then was) and Agriculture.

The opening of the negotiations was the culmination of a process in Ireland dating back to the decision to open up the economy, following Dr T.K. Whitaker’s initiative in publishing the Grey Book on Economic Development in 1958 and subsequently the First Programme for Economic Expansion 1958 -1963.

The decision to apply for membership of the European Communities followed and the application was lodged on 30 July 1961. Two abortive efforts to negotiate membership took place in the sixties. Between 1961 and 1963 the British negotiations with the Six took precedence. Ireland did not get beyond an opening session in 1962 before General De Gaulle vetoed the British application in January 1963. A further effort failed in 1967. The way to the third and ultimately successful effort was opened by the agreement at the Hague Summit in December 1969. The original six member States agreed to reopen enlargement negotiations as part of a package that included a commitment to Economic and Monetary Union (by 1980!) and to enhanced political (foreign policy) cooperation among the member States.

While the 1960s may not have seen progress in efforts to negotiate Irish membership, they did see a major drive across both government and the Irish economy to prepare for membership. The possible obligations of membership were factored into major policy developments and sometimes helped to drive them, e.g. the introduction of VAT in 1969. The capacity of industry to cope with the demands of trade liberalisation was assessed in the sectoral studies undertaken by the Committee on Industrial Organisation (which also opened the way to more systematic consultation of the social partners, especially, at that stage, the employers). Economic analysis capacity was deepened by the establishment of the Economic (and later Social) Research Institute. The work of the promotional agencies – the IDA and the Export Board – was geared up. In this context the importance of fiscal incentives to Irish economic development became fully apparent. Agriculture, which was expected to benefit most immediately from membership of the European Communities, was reformed with an emphasis on planning, research and quality. The public administration itself began geared up – for instance, senior officials went to courses in Tours to learn or to improve their French and the language unit of the Civil Service Training Centre came into its own under the redoubtable Adele McAvock.

The freeing up of trade that would follow membership of the Communities would be a major shift from the policy of protectionism which might have made some sense in the thirties but had passed its time by the end of the fifties. Ahead of membership, and throughout the sixties, the government took steps to get the Irish economy ready for free trade:

The work on these issues and especially on the three economic development programmes that government introduced during the sixties had established a high level of interdepartmental cooperation. When the negotiations on membership of the Communities started, Departments had considerable experience in working up positions for international negotiations and there was a very high awareness across government of where the challenges lay. Even the abortive accession negotiations of the sixties had allowed government to identify the challenges as part of the preparation process. The AIFTAA and the GATT accession negotiations tested capacity and provided lessons for the future.

The 1970 negotiations were led at government level by Dr Hillery, the Minister for Foreign Affairs. At official level they were led by the Department of Foreign Affairs with Sean Morrissey chairing the negotiating team drawn from the four core Departments. The broader internal coordination that included virtually all Departments at one time or another, was led by the Department of Finance. Interdepartmental rivalries were inevitable especially between Foreign Affairs asserting itself in the area for the first time, and Finance, which had traditionally led on Communities issues. However, from the point of view a junior officer then in Finance, I recall that an esprit de corps developed across departments and was shown in a determination by all involved to represent Ireland well.

Membership of the European Communities was always going to involve a highly political agenda. This was crystallised in the acceptance from a very early stage that a constitutional amendment and thus a referendum would be required – effectively approval by the people of the outcome of the negotiations. The work of preparing the amendment was undertaken by a small committee chaired by the Attorney General.

The need for a referendum, however, meant that the negotiations were going to be subject to far more Oireachtas and public scrutiny than any other negotiation since the foundation of the state. Just ahead of the negotiations the government had published two White Papers on the issues – one covered the negotiations as a whole while the other dealt specifically with agriculture. The debates that followed were lively and constructive and showed the divisions that existed on membership. Dr Garret FitzGerald, in opposition at the time, criticised the general White Paper for not giving a clear picture of negotiation positions. This was unfair because the government was not likely to reveal its hand ahead of negotiations, but as a colleague remarked at the time he did a very useful service by outlining in his Dáil speech where he saw the most significant issues. Labour, which set out to oppose membership, gave a constructive outline of the arguments against membership – especially in the contributions by Justin Keating.

Thus, when Dr Hillery went to Luxembourg fifty years ago he was presenting an Irish negotiating position that had been worked out over a decade or more. The address he made to the Six was brief but it contained a series of essential strands that in some areas still stand as Irish preoccupations.

Dr Hillery committed Ireland to accepting the acquis communautaire and the future development of the Communities as outlined in the agreement at the summit in The Hague in December 1969 on Economic and Monetary Union and on political cooperation. Agriculture, while presenting fewer problems than other sectors, was a major issue of course and received due attention especially on animal and plant health standards and on the particular position of Irish exports to the UK. Fisheries, where the Communities had adopted an unwelcome policy just ahead of the negotiations, was going to be a major concern – and would be the subject of difficult negotiations (as it has been ever since). On Industry, while Dr Hillery was able to point to major achievements in the sixties with industrial output doubling in Ireland and industrial trade now accounting for over half of exports, there were areas where transition periods would be required. He particularly stressed the importance of financial and fiscal incentives (export tax relief) to the development of Irish industry – as fiscal policy remains fifty years on. The particular relationship with the UK figures prominently. Most directly, the Anglo-Irish Free Trade Area arrangements should be allowed to run their course. From a negotiating point of view Ireland needed to have sight of developments in the negotiations with the UK where Irish interests were likely to be at issue – again a familiar concern today. The negotiations with all four applicants should proceed in parallel and accession should take place at the same time. The previous year Jean Monnet had proposed that negotiations with the UK should be opened and completed before they started with the other applicants. Ireland strongly opposed this and concerns clearly still existed that this might yet happen. Finally Dr Hillery affirmed Ireland’s commitment to the ideals of European integration especially in preserving peace in Europe – a commitment that is there today.

The opening of negotiations was a formal event. Substantive negotiations began in September 1970. Ministerial sessions with the Six were held every three months. Meetings took place every month involving the official negotiating team under Seàn Morrisey. As well, there was a very extensive network of official level negotiations on the many technical issues. This drew in a wide range of government departments and introduced the Irish administration to the demands of coping with the Brussels machine. The negotiations were completed early in 1972. The Accession Treaty was signed on 22 January 1972. The referendum on the amendment of the Constitution took place on 10 May 1972 and the amendment was approved by 83% of the voters.

Much has changed in the fifty years since the Luxembourg meeting “marked the transition of Ireland’s European policy, after nine years, from aspiration to negotiation” (Denis Kennedy Irish Times, 1 July 1970). But there is a surprising degree of continuity. Economic and monetary union is still a work in progress. Fiscal policy concerns are if anything even more contentious. The UK relationship with Ireland and with its partners has become complicated though not in a way that could not be foreseen then. Ireland’s inevitably special relationship with our neighbour is as much an issue for government today as it was in 1970. The need to know what the UK is aiming for in negotiations in Brussels is as pressing now as it was then. Fisheries policy is still as thorny and difficult as ever. But the fear that the UK would join and that Ireland would be left on the margin has been turned on its head.

Ireland continues to honour Dr Hillery’s commitment to the development of European integration. Indeed, the fact that Ireland has not followed the UK out of the European Union and the fact that there is political and popular consensus on the issue is striking. Also the fear that closer political cooperation with partners would end our independence on the international stage and that Ireland would become a creature of a larger entity has not been borne out as the recent election to the UN Security Council attests.