On 20 July 2020, Achim Steiner, Administrator of the United Nations Development Programme, gave an address to the IIEA. This briefing summarises many of the concerns that the UNDP has in relation to the COVID-19 pandemic and the potential for an economic recession. It also outlines how the UNDP is working with countries around the world to develop strategic responses to the impacts of the pandemic. 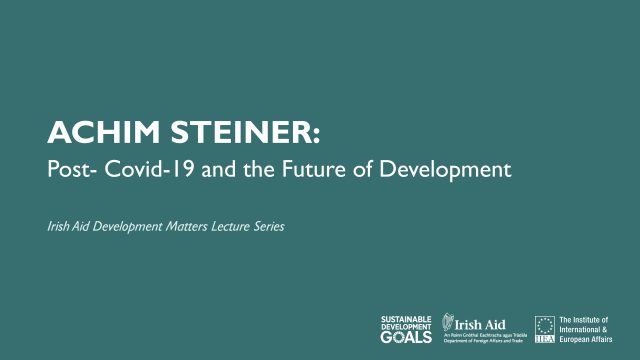 Mr Steiner echoed the words of the UN Secretary General, António Guterres, that countries around the world are facing different impacts of COVID-19 and are addressing them at different paces. The situation is getting worse and an end to the pandemic is not close, neither from a health nor a socioeconomic perspective.

Some countries are facing health crises, however others are facing socioeconomic crises as they try to prevent health crises. Lockdowns in developing economies and the socioeconomic implications have, in some scenarios, overtaken the health impacts. The lockdown measures that governments have imposed to protect societies against COVID-19 are fundamentally altering people’s socioeconomic wellbeing. This is an incredibly complex situation for governments, societies and multilateral organisations to tackle, which is further intensified as some seek to politicise key public health measures.

The Security Council and the United Nations General Assembly have traditionally been forums where people can come together to create global responses, global solidarity and global capacity to face crises. Mr Steiner suggested that Ireland’s membership of UN Security Council is coming at an ideal moment.

Forums such as the Security Council are essential to create a common assessment of what must be done to tackle COVID-19 and to create consensus despite political differences of its members. Ireland’s strong commitment to humanitarianism and development will be essential in constructing a clear COVID-19 response, which places those furthest behind at the centre.

As countries have had to focus inwards and face the domestic reality of COVID-19, the UN has stepped up its international efforts to protect the interests and needs of those most at risk. However, for the first time since the inception of the Human Development Index, the world is facing a decline in human development:

These new realities are forcing nations and the international community to make new development choices and refocus capacities in order to remain capable of continuing their support.

The UN Secretary General, António Guterres, said that we cannot go back to the normal of yesterday. In his Mandela lecture of 18 July 2020 (Tackling the Inequality Pandemic: A New Social Contract for a New Era), he highlighted the inequalities in societies all over the world which go beyond the normal measures of GDP, employment and hunger, and have serious political consequences. He outlined how economic inequalities have resulted in people disengaging from the political process and protesting against their governments. Mr Steiner believes that this is part of the development crises which is emerging around the world.

The Sahel region faces a huge range of issues and if the international development community cannot continue to support this area and those most vulnerable, there is likely to be an increase in extremism and radicalisation. This is one clear example of how issues such as governance and the rule of law are under threat as people turn their backs on the societies which have treated them so poorly. The COVID-19 pandemic is highlighting and exposing many of the underlying inequalities and frailties around the world.

The global economy is unlikely to recovery quickly. The need for macroeconomic stability is essential for countries to base their responses on. Credit lines which the IMF have opened up are vital but will increase national debt. Similarly, the World Bank has increased its lending capacity which allows countries more space to plan their responses. But these are both short term measures. The UN Secretary General said that the structural challenges around debt must be addressed as many countries will face debt crises in the immediate future. Mr Steiner added that this should focus both on national debt, but also on corporate debt which is at a much higher level than in 2009.

Initially, the UNDP focused on enabling countries to maintain their operational capacities and, alongside many of the leading NGOs, provided emergency supplies to the most vulnerable communities. The UNDP has since established itself as the socioeconomic lead in the UN and works with 160 nations to help develop their socioeconomic strategies. This involves making very difficult choices and countries must make sure that the investments and mitigation strategies they decide on are investments into a future development strategy towards recovery. The UNDP offers its expertise and guidance to countries as they face these difficult choices that have huge implications for their citizens.

Working alongside these countries, the UNDP has identified four key areas for recovery

The UN Secretary General is extremely worried about the geopolitical situation and the implications of a financial crisis. However, Ireland could play a leading role as a member of the UN Security Council through its membership of the EU and with its longstanding commitment to development and humanitarian principles. Voices with expertise, rationality and independence can help to build cooperation which is essential for the UN and for states around the world to battle against this pandemic and clear a path for a better future.